NEW Bhoy Carl Starfelt will launch his Celtic career in the Premiership opener against Hearts in Edinburgh a week on Saturday.

The Swedish international centre-back has sealed a £4.2million four-year deal with the Hoops from Russian club Rubin Kazan, as CQN reported last night.

Providing there are no late delays and the contract and international clearance go smoothly, he will be poised to play at Tynecastle as the Parkhead men kick off ther quest for a tenth successive title in 11 years.

Twenty-six-year-old Starfelt arrived in London on Sunday and is quarantining as per government protocols in the same manner as boss Ange Posecoglou when he was on his way from Japan last month, as reported in the Daily Record. 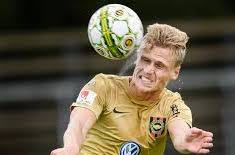 HEADING FOR THE TOP…Carl Starfelt has agreed a four-year deal.

However, the back-four operator will not be eligible for the Champions League return leg against FC Midtjylland in Denmark on Wednesday following the 1-1 stalemate in Glasgow on Tuesday night when makeshift centre-half Nir Bitton was red-carded before the interval.

The Israeli international midfielder is now banned for the second game and Postecoglou may be forced to hand 18-year-old Dane Murray, who came on for the banished Bitton, his first European start against the Danes.

On the Starfelt switch, the former Australian boss said: “I am really pleased an agreement has been reached and we are really looking forward to Carl joining up with the squad.

“Carl is an experienced player and someone with the attributes to be a real success at Celtic. He is a strong, athletic and a committed defender and will add quality to our squad I hope.

“I am sure he will be a player our supporters will welcome warmly and someone who will be really important for us going forward.”

Japanese striker Kyogo Furuhashi, top scorer in the J1-League with Vissel Kobe, is also on his way in a £4.5million move, but, like Starfelt, is now in the process of beginning his quarantine period in the UK.

Starfelt is Postecoglou’s third major signing in the space of eight days following Furuhashi and £3.5million Israeli winger Liel Abada, who scored on his debut against FC Midtjylland.