THE STORMS BREAK is the second book in a fascinating series by historian Ian McCallum. Last week CQN reviewed his first book in the series The Gathering Storms and you can read this HERE.

This second book, The Storms Break is set within the context of the Glasgow Irish community’s long-held aspiration for Home Rule for Ireland, and the conflicts and paradoxes of their dual Scots–Irish identity at a time of grave national emergency in Ireland and in Europe. 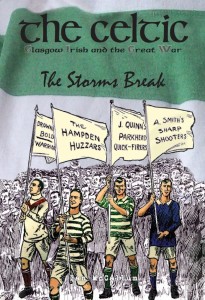 McCallum examines the reaction of the Glasgow Irish community to the social and moral pressures brought about by events at home and abroad as they unfolded over the first year of the Great War.

The Glasgow Irish on the eve of war was a community in transition toiling with overlapping identities – ethnic, religious and political. Just how Scottish or British did third- or sometimes even fourth-generation Glasgow Irish feel and how much loyalty did the Scots-born Glasgow Irish feel they owed to their new homeland? How were they supposed to respond to the British nation’s call to arms having suffered decades of bigotry, derision, racism and marginalisation?

On a very personal level, the dilemma for the Glasgow Irish was just how much loyalty they felt they owed to their local community, to their neighbours and workmates. Exactly how marginalised and under siege did they as a community feel? Was it enough to stand on the sidelines of the war? For the first eighteen months of the Great War, enlistment would be entirely voluntary and a matter for an individual’s personal choice.

Just how much moral pressure did the Glasgow Irish feel as they watched their neighbours march off to defend the community, including their own wives and children? With cultural ties to Ireland still immensely strong, what of the old maxim: “England’s difficulty is Ireland’s opportunity!” 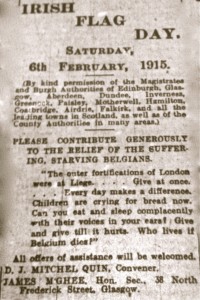 Over the course of the Great War, the Irish and by association the Glasgow Irish came under close scrutiny regarding their loyalty and commitment to Great Britain and to the British war effort. Conditioned for over forty years by the Roman Catholic Church and their political leaders to strive for respectability, advancement and inclusion into the wider society, the Great War would provide an opportunity for the Glasgow Irish to demonstrate their commitment to their native city by contributing their share of the blood sacrifice. The question was would they take it? Great Britain declared war after the invasion of neutral Belgium and France by massive German conscript armies of five million men. A small British force of just 90,000 men that comprised the bulk of the forces based in Great Britain and Ireland was sent to France to fight alongside their French allies.

As massive armies clashed in Belgium and France, the key military events which led to the stalemate that saw continuous lines of trenches stretching from Switzerland to the Belgian coast and which set the military scene for the next four years is explained. The contributions of Irish and Scottish battalions during the fist year of the conflict are highlighted through a number of personal stories of young Glasgow and native Irishmen fighting on the Front Lines.

Meanwhile at home, the rump of the British Army had to be expanded rapidly to meet the threat of German invasion and help prevent the potential German conquest of Western Europe. Dominating the social agenda at home over first year of the war therefore, was the vociferous army recruiting campaign that saw two million young men voluntarily enlist into the British military by August 1915. Encouraged by their priests, political leaders and their own long established martial tradition and enthusiasm for the war, tens of thousands of Glasgow Irish and nationalist Irish males would follow their contemporaries into the military. 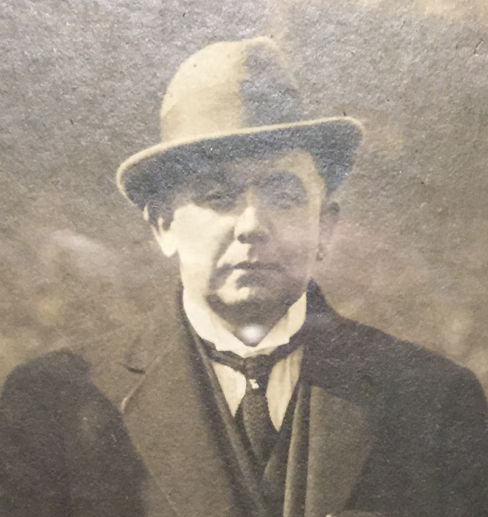 In the midst of the recruiting maelstrom even the Celtic manager, Willie Maley, himself the son of a professional British soldier, wrote an open letter the Scottish newspapers complaining that despite being fitter than most recruits, he was not allowed to enlist because of his age. As the recruiting furor reached fever pitch, very young single man of recruiting age came under enormous pressure do their bit and to enlist.

Accused of not doing their bit The Storms Break highlights the moral and financial pressures applied to all professional footballers to enlist into the military, thereby encouraging their club’s supporters to follow them into the army. Considered by many of the middle class to be hindering recruiting, Association Football as a sport came under immense pressure to cease for the duration of the war. The book examines the middle-class crusade to have working-class professional football suspended for the duration of the conflict. It highlights the leading role played by Celtic chairman Tom White, then the Vice President of the Scottish Football Association, in the ultimately successful fight against the powerful ‘Stop Football’ lobbyist amid demonstrations at Parkhead to stop football. In England the same lobbyists forced the FA to suspend professional football for the duration of the war.

Central to the narrative and running throughout the book is the Celtic football team’s match-by-match performances on the field of play. The book lists every single game played by Celtic including friendlies, charity and testimonials over the course of the 1914–1915 season and includes match reports, goal scorers and team lists. Also highlighted are the club’s reactions to political, military and footballing events as they unfolded over the course of the 1914–1915 football season. The overt Irish ethos of the Celtic club influenced the wider Glasgow community’s opinion of the club and its supporters, and as political tensions in Ireland mounted, the perception of the club’s contribution to the British war effort would on several occasions be called into question.

The Storms Break studies, game by game, the race between the Celtic and Heart of Midlothian FC for the 1914-1915 Scottish League title. It examines in detail the circumstances that led to a number of Hearts footballers famously enlisting into the army and goes on to challenge the myth that their subsequent military service cost Heart of Midlothian the 1914/1915 League Championship.

The first year of the war is set out on a month-by-month basis and all the major British and Irish political, social and military events are highlighted and explained. In addition, a number of events of particular significant to the Glasgow Irish and Scots Roman Catholic community are highlighted in their own sub paragraphs. The events include; the arrival in Glasgow of thousands of Roman Catholic Belgian refugees; the attitude and reactions of the Glasgow Irish Volunteers to John Redmond’s Woodenbridge speech; Willie Angus VC, Roman Catholic military chaplains; the raising of the 18th (Service) Bn. Highland Light Infantry by Celtic director Lieutenant Colonel John Shaughnessy; the Glasgow Rents Strikes and the Irish Flag Day. 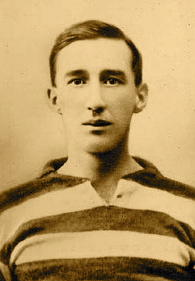 The Storm Breaks by Ian McCallum is available at selected Waterstones bookstores and Celtic stores as well as online at the web address below.

* You can get copies of both The Storms Break and The Gathering Storms by Ian McCallum, both with FREE postage available from   www.theglasgowirish.com