BRENDAN RODGERS has given Stuart Armstrong the green light to join Southampton in a £7million deal.

And former Celtic striking hero Chris Sutton believes it is time to show the 26-year-old midfielder the Parkhead exit.

He said: “There is no question a parting of the ways this summer suits both parties. It was an easy decision for Brendan Rodgers.

“If the player is not going to show commitment, then it’s time to chase him.”

The Scotland international, who cost £2million when he moved from Dundee United in a joint deal with Gary Mackay-Steven in January 2015, has been granted permission to speak to the Premier League side following months of speculation over his future.

The Hoops last night accepted a £6million cash offer with a potential £1milllion in add-ons from the south coast club who came so close to relegation last season. 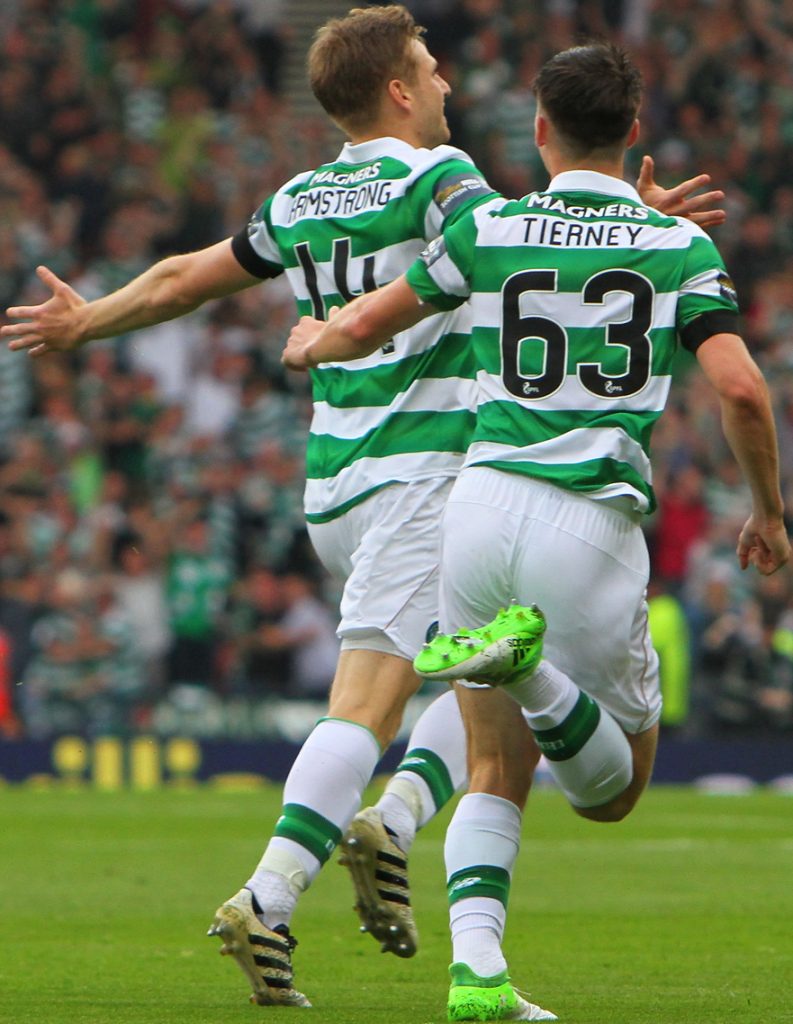 STU BEAUTY…Armstrong and Kieran Tierney celebrate his equaliser in the Scottish Cup Final win over Aberdeen two seasons ago.

Armstrong struggled to replicate his form of the previous campaign last time out and was a peripheral figure as Rodgers led the team to a historic double treble.

Olivier Ntcham, the £4.5million capture from Manchester City a year ago, settled in well beside skipper Scott Brown in the engine room of the team with Callum McGregor also emerging as a midfielder of genuine international quality.

And there was the further bonus of Tom Rogic, the Wizard of Oz, agreeing a five-year extension at the end of the term.

Armstrong struggled to feature regularly in the last campaign and made a mere 15 appearances.

The move makes financial sense to the seven-in-a-row title winners and will help to pay off a huge chunk of the fee the club spent on record signing Odsonne Edouard from Paris Saint-Germain last week, a deal that will be a record for the Bhoys at around £9million.

Of course, Armstrong’s switch has now triggered speculation Rodgers is about to splash £2.5million on Hibs’ enforcer John McGinn who has long been seen as the ideal replacement for captain Brown when he decides to move aside.

Sutton also agrees the deal will work in his old club’s favour. He added: “Armstrong signing a one-year extension last summer was only a delaying tactic. He obviously didn’t get the move he was looking for so opted to sit tight for another season. 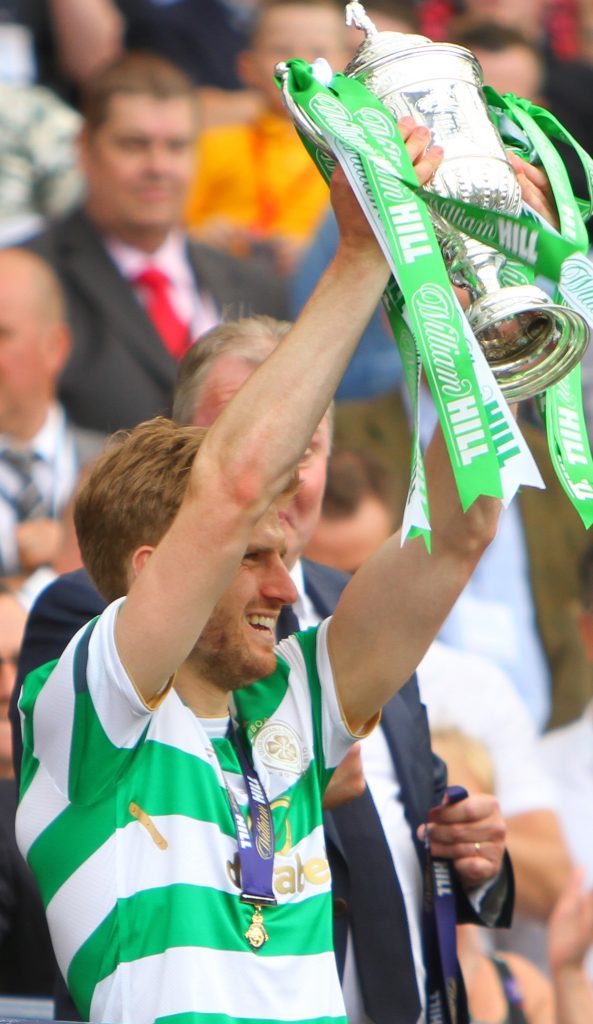 THE CUP THAT CHEERS…Armstrong holds aloft the Scottish Cup.

“You only need to look at the stats. In Brendan Rodgers’s first campaign, Armstrong scored 17 goals and created another seven.

“It wasn’t good enough. The contract wranglings disrupted the first few months of the season, there were a couple of injuries here and there and he never got going.

“For all he didn’t hit the heights last term, there’s still a player in there and if the likes of James Maddison can go for £24million, then the Scotland midfielder could end up being a bargain buy for Saints.

LEAGUE CUP SMILES BETTER…Armstrong with the trophy after the 2-0 win
over Motherwell.

“Olivier Ntcham has made huge strides and is now settled in the side. Look at the form of Callum McGregor, especially the way he performs in the big games that matter.

“Tom Rogic signing a new five-year deal is exactly the kind of commitment I’m talking about.

“His long-term deal looks better business by the minute given his impressive displays in Russia for Australia.

“All of a sudden, it’s hard to see where Armstrong fitted in and with a year left on his deal Celtic had to cash in.” 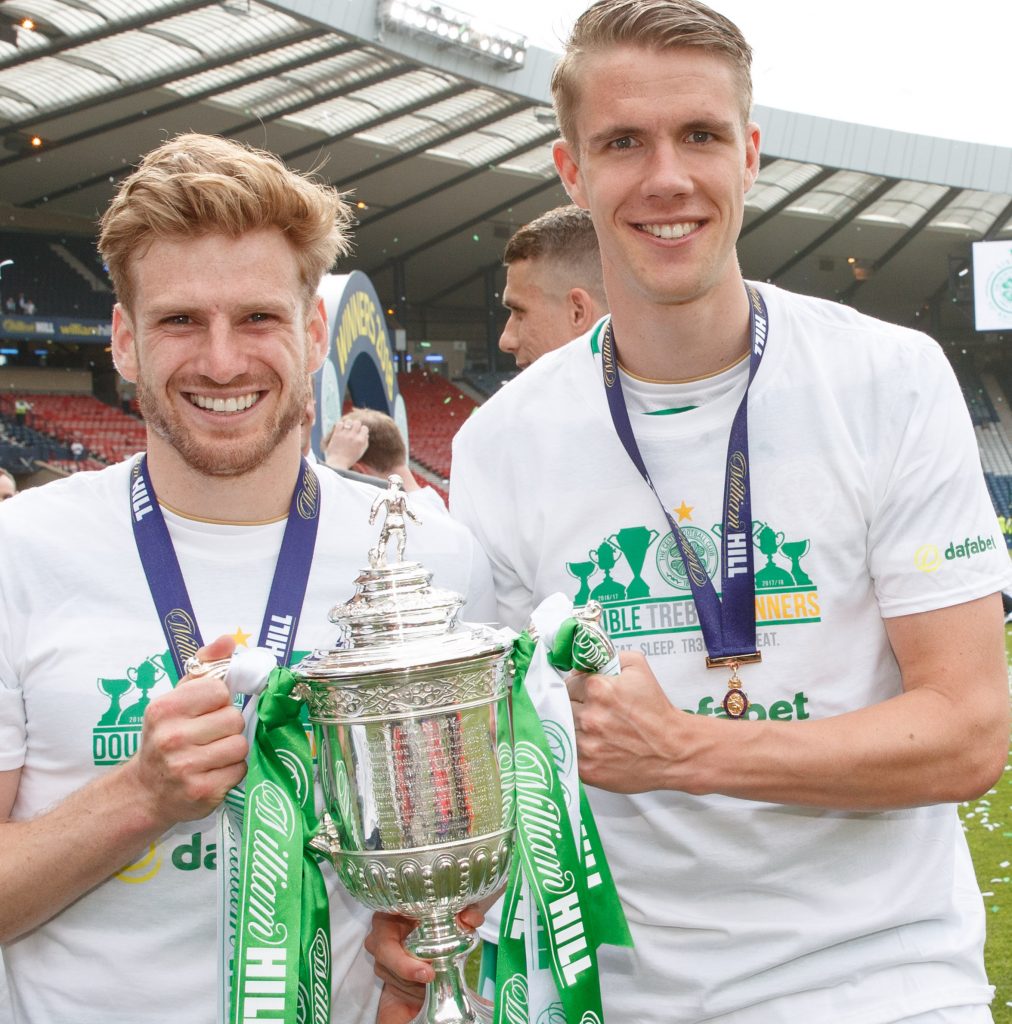 THE LAST HURRAH…Armstrong, a second-half substitute, celebrates along with Kristoffer Ajer following the 2-0 Scottish Cup Final win over Motherwell in May.
Pics: Geo.