Celtic Quick News on News Now
You are at:Home»Flashback»TREBLE TREBLE: THE BIG MATCH: CELTIC 2 HEARTS 1
By CQN Magazine on 25th May 2020 Flashback

CQN marks Celtic’s historic treble treble which was sealed today a year ago at Hampden.

We kick off the special four-part series tribute with our big match report from Hampden, May 25 2019.

ODSONNE EDOUARD has already made Celtic history as the club’s most expensive player, so it was somehow appropriate the French star was the man who delivered even more to the club’s extraordinary folklore.

With the team toiling and trailing 1-0 to a Ryan Edwards strike, it was the £10million frontman, signed on a permanent deal from Paris Saint-Germain in the summer, who stepped up to fire the club to a phenomenal treble treble.

Edouard took centre stage in the club’s annals of fame when he strode onto a pass from Jonny Hayes in the 61st minute and had Christophe Berra chasing and Bobby Zlamal racing from his line to try to bail out his defence.

The talented striker weaved to his left as the keeper went down to make contact and referee Willie Collum had no hesitation in awarding a penalty-kick. There wasn’t much argument from the Hearts players as the composed Edouard placed the ball on the spot.

He took a couple of steps back as the Celtic fans in the Hampden crowd held their collective breath before ambling forward in nonchalant fashion before thumping the ball low to the goalie’s right hand and in at the post. 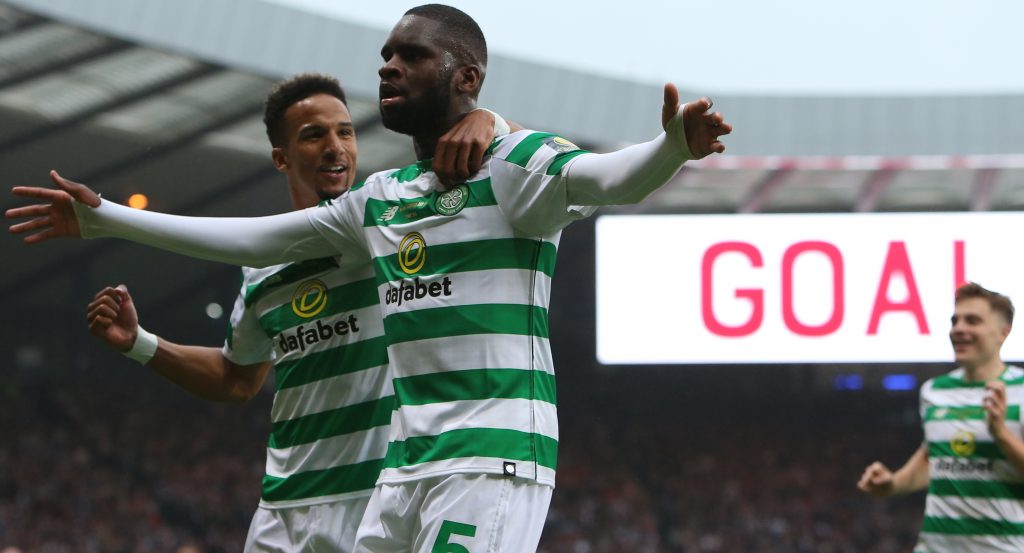 MAGNIFIQUE…Odsonne Edouard is congratulated by Scott Sinclair with James Forrest about to join in after the winning goal. 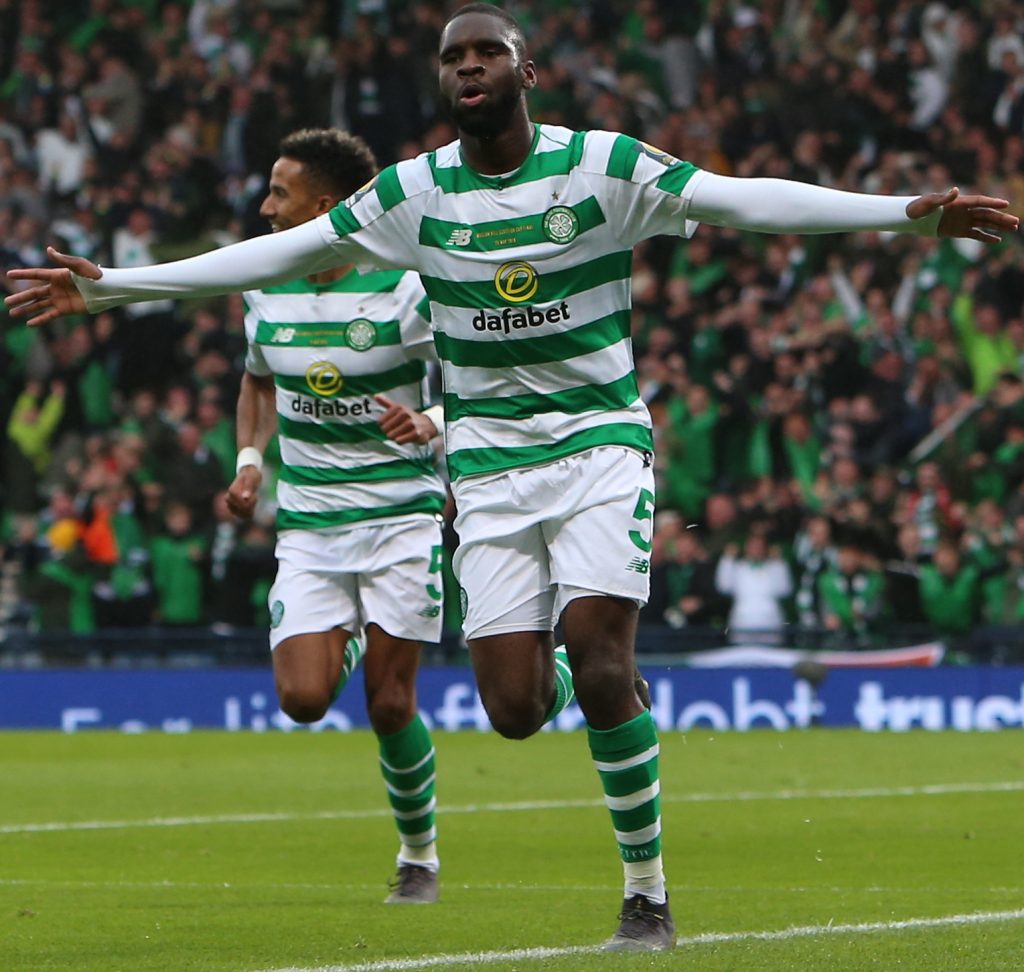 READY FOR TAKE-OFF…awesome Odsonne Edouard races away after his second goal. 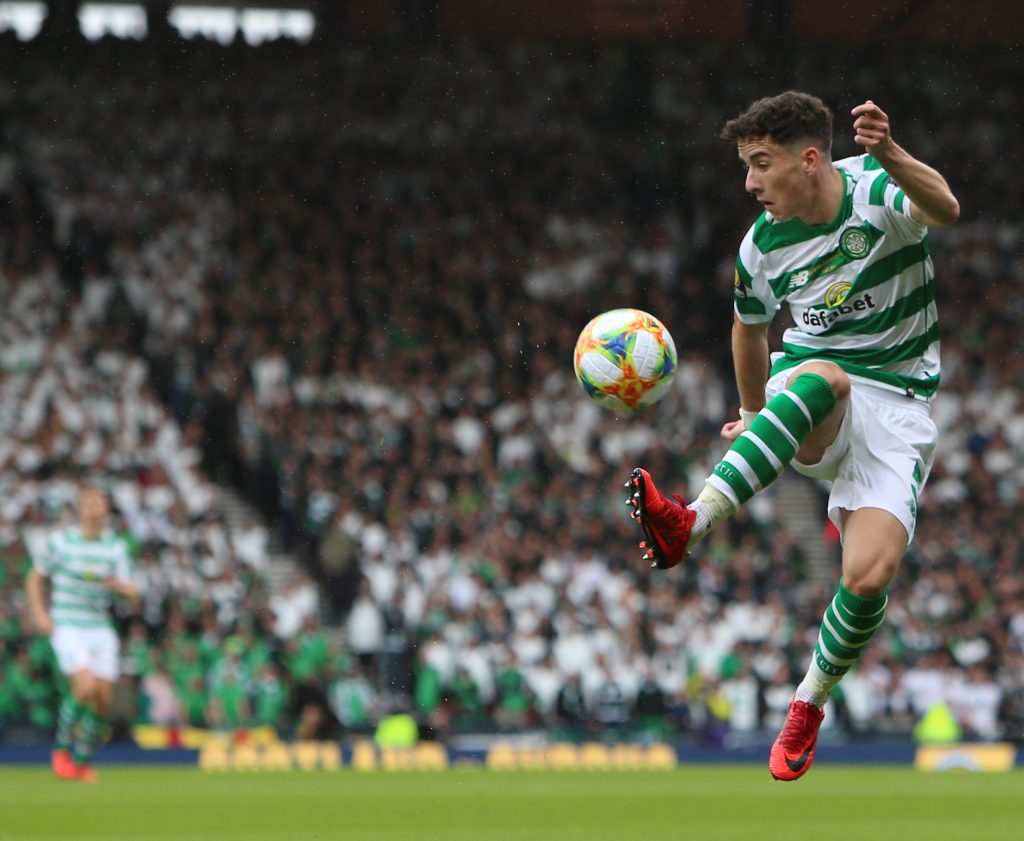 MID-AIR MAGIC…Mikey Johnston attempts to bring the ball under control.

It was the lifeline a Hoops outfit required urgently on a day when they failed to spark. But they deserve the utmost credit for coming back so quickly and so positively after the loss of a dreadful goal in the 53rd minute.

The defence failed to deal with a simple throw-in on the left when Arnauld Djoum lost James Forrest before the ball fell to Sean Clare who back-heeled it in front of the unmarked Edwards who found far too much space in the danger zone.

He could hardly believe the acres he was afforded as he rattled a shot through the legs of Scott Bain for a sensational opening goal. It was also a resounding wake-up call for a strangely lethargic and sloppy Celtic outfit.

The first-half passed with the Hoops failing to take control and lacking cohesion in their forward play which wasn’t helped with some wayward distribution from keeper Bain.

He gifted the Edinburgh side a goal at Parkhead last week and looked nervy with the ball at his feet on far too many occasions to make life comfortable for his team-mates, the manager or the fans.

His lack of accuracy was highlighted when he sent a free-kick sailing out of play on the left wing which was quickly followed by another clearance that went for a shy on the other wing only moments later.

It wasn’t all down to the keeper, of course, as Celtic couldn’t get into their rhythm or find any cohesion with their passing. Forrest and Mikey Johnston were starved of service, Edouard needed support and Scott Brown was spending far too much time passing the ball sideways and backwards.

Callum McGregor, though, looked up for the challenge and was getting around the pitch in an earnest endeavour to motivate his colleagues.

There was precious little on show in the opening 45 minutes to excite the fans of the champions with their team on the brink of a phenomenal achievement. 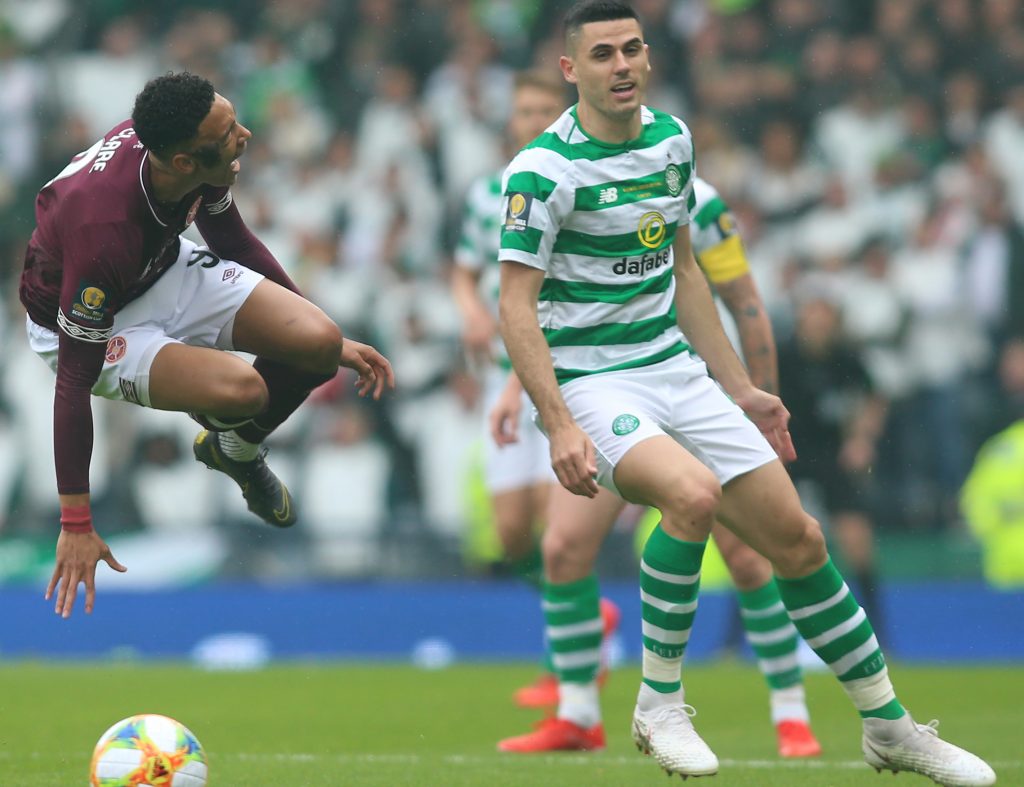 In the sixth minute, there was a bright passage of play on the left when Johnston shimmied inside before rolling a pass to the overlapping Jonny Hayes, but his low cross was booted for a corner at the near post by Christophe Berra.

In the 21st minute, McGregor picked up possession in midfield and released Tom Rogic who touched the ball in front of Edouard, but John Souttar read the move and got across to block the shot from the Frenchman.

Two minutes later, Edouard was sent clear on a pass from McGregor, but Zlamal was out swiftly to block the effort. It didn’t matter in any case with the assistant referee wrongly flagging for offside. The big attacker was clearly played onside by left-back Aaron Hickey.

And so it continued after the interval with Celtic showing a bit more urgency and Hayes blowing a good opportunity as the team broke forward. The Irishman had a rush of blood to the head and elected to have a blast at goal from long range and missed by miles while four team-mates didn’t look too impressed as they swarmed into good positions. 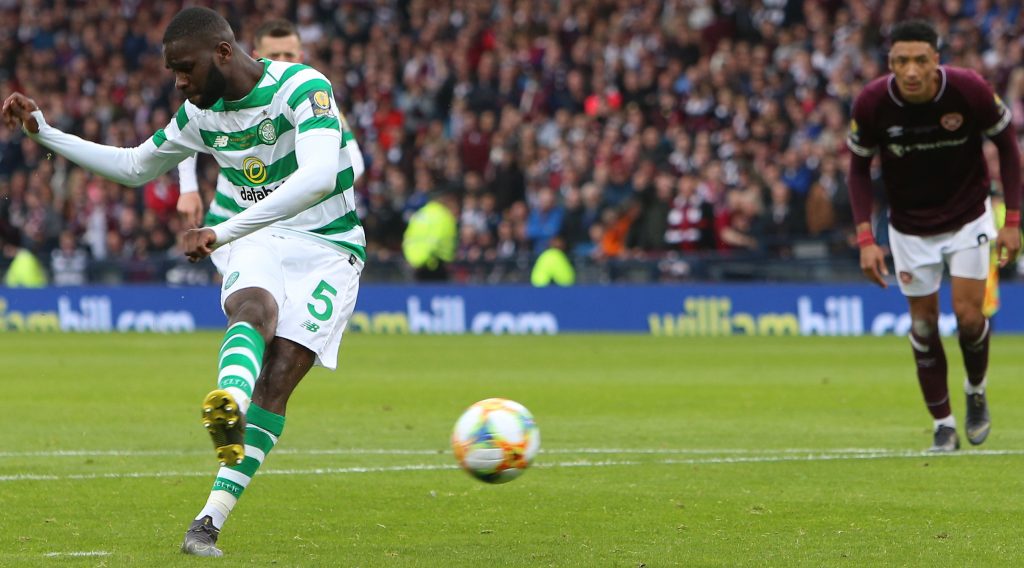 SPOT ON…Odsonne Edouard slams in the equaliser with his penalty-kick.

But there was a praiseworthy response to losing a goal that could have been prevented all along the line and Edouard’s leveller from the spot was impressive with the youngster showing wonderful composure under so much pressure.

And he did it again in the 82nd minute when Mikael Lustig headed a ball forward that fell perfectly for the aware striker with the Hearts defensive double-act of Berra and Souttar split for the only time in the game.

Edouard took the ball in his stride in an instant, raced forward, enticed Zlamal from his line and with the greatest of ease stroked the ball away from the keeper and into the inviting net.

Neil Lennon made changes as he strengthened the team as the clock ticked down towards history and Olivier Ntcham, Scott Sinclair and Nir Bitton came on for Rogic, Johnston and Hayes.

Five minutes were added on as nerve ends stretched to snapping point before the referee eventually blew for full-time.

The Celtic players stood at Hampden for that moment as it dawned on them what they had achieved.

Lennon was clearly emotional as he fell to his knees on the touchline.

Memories are made of this.