MIDFIELDER David Turnbull, who limped off in the Premier Sports League Cup Final triumph over Hibs nine days ago, could miss Celtic’s next TWELVE games.

The Scotland international looks set to be sidelined for at least the next two months with eleven matches scheduled for January and February with a Premiership meeting with St Mirren due at Parkhead on March 2.

It’s a massive setback to the 22-year-old playmaker and Ange Postecoglou and the injury is much worse than was originally feared. 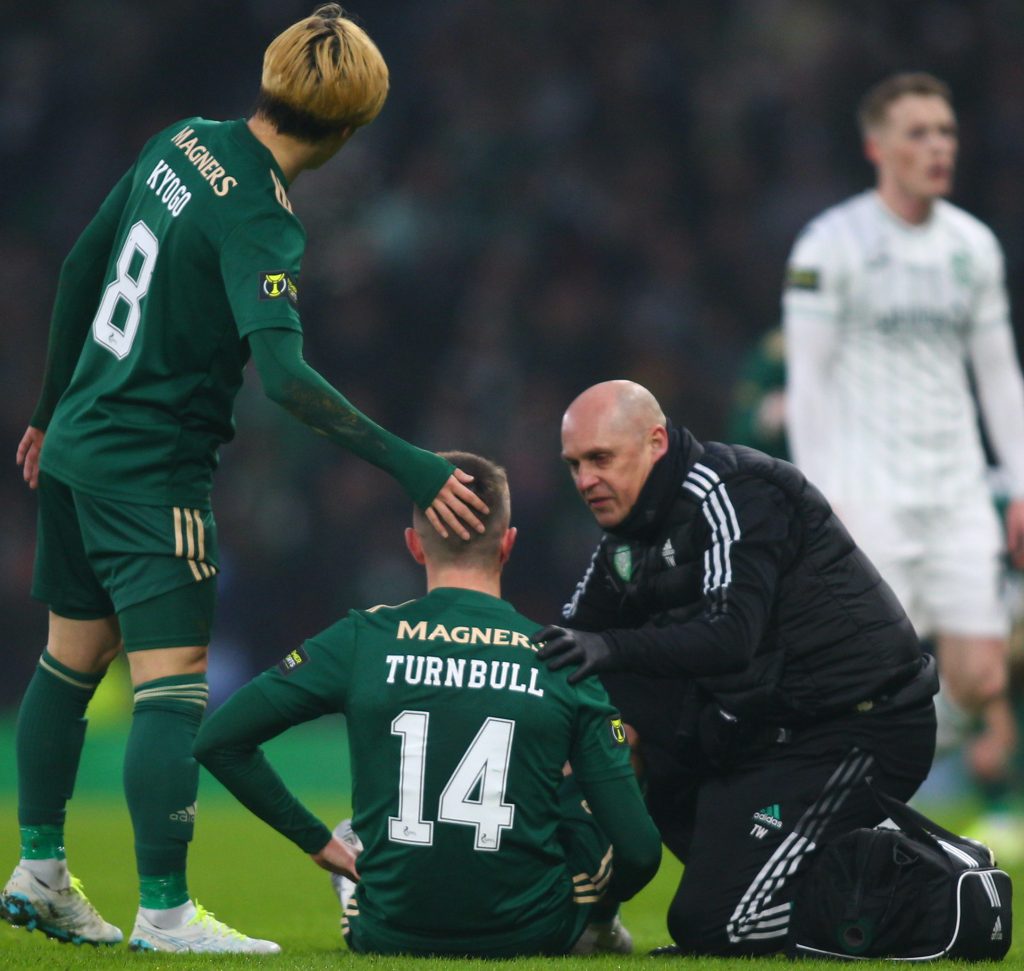 DOWN AND OUT…grounded David Turnbull is given a pat of consolation by Kyogo Furuhashi as he is given treatment at Hampden in the silverware showdown with Hibs.

Turnbull was obviously distressed as he received treatment on the Hampden pitch after just 27 minutes of the showpiece encounter against the Easter Road club and he was in tears as he was helped off to be replaced by Nir Bitton.

Postecoglou put the strain sustained down to fatigue, stating his player had “suffered from the amount of games we are playing at the moment” and “have not been able to rotate,” according to a report in The Scotsman.

Now, it has emerged that Turnbull’s problem may not be short-term with the injury understood to be of sufficient severity to require an extended period of rest.

The minimum two-month timescale would count him out of the rescheduled visit of Giovanni van Bronckhorst’s Ibrox side on February 2 as well as the European Conference League confrontations with Norwegian champions Bodo/Glimt in Glasgow on February 17 and the return the following week.

Until the fateful match against Hibs at the national stadium, Turnbull had been the only member of the Hoops first-team squad to have figured in every one of the 34 competitive games the club had played up to that stage.

It was a punishing sequence that saw him net nine goals over 2,840 minutes on the pitch since the campaign kicked off in July.

It is now feared Turnbull will miss a chunk of the term with Celtic due to play Hearts at Tynecastle, Motherwell at Fir Park, Aberdeen at Pittodrie and Hibs at Easter Road, in addition to the Glasgow derby and European and Scottish Cup assignments with the national trophy starting with a match at Alloa on the Saturday evening of January 22.