CRAIG GORDON is planning on putting up the shutters in the Parkhead double-header over the next four days.

The Celtic keeper is looking for clean sheets in the Europa League play-off second leg against FK Suduva tomorrow night and also against Sevco Rangers on Sunday.

The 1-0 win over Hamilton Accies at the weekend was the Hoops’ first defensive blank in seven games with the Scotland international No.1 Gordon beaten five times and Scott Bain losing one over the period.

Gordon was not entirely blameless, either, for the gift of a goal in Lithiania last week when he and his defenders, notably Cristian Gamboa and Jozo Simunovic, failed to deal with a routine free-kick into the box.

The shotstopper, though, is focused on the champions sorting out their back-four problems to build a solid platform for the campaign ahead.

He said: “Keeping clean sheets has been something we’ve been very good at over the last two seasons.

“We had been going along at something like a 50 per cent success rate when it comes to keeping clean sheets and that is an incredible ratio in any league anywhere in the world. 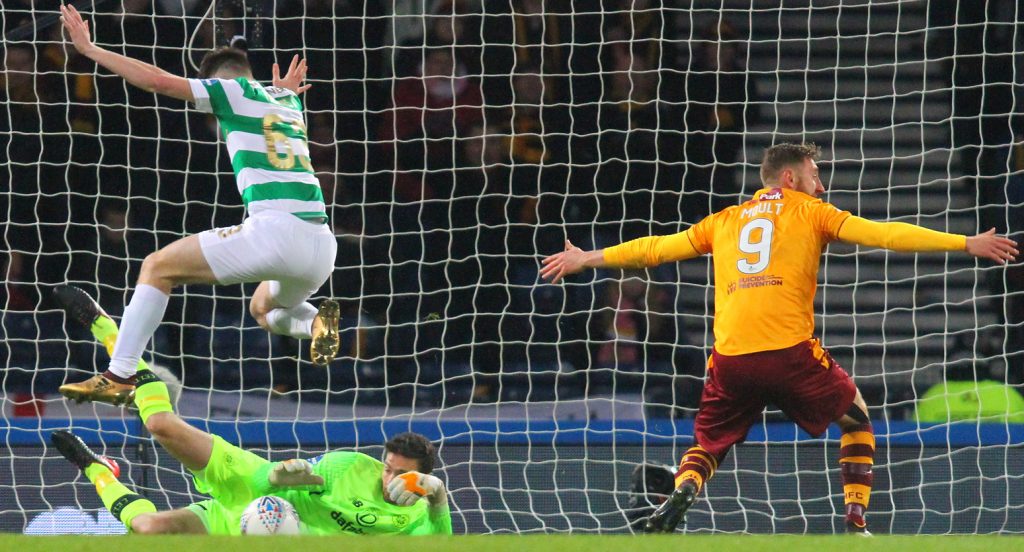 WELL SAVED…Craig Gordon gets down to thwart Motherwell in last season’s 2-0 League Cup Final victory with Kieran Tierney taking to the air and Louis Moult in close attendance. Pic: Geo.

Frustrated gaffer Brendan Rodgers claimed in the aftermath of the 1-1 draw with FK Suduva in the opening tie that his players had to take greater pride in their defensive work.

Gordon said: “I think we have just been giving up a lot of easy chances recently and that’s disappointing. Teams haven’t had to work too hard to get their goals against us so far this season.

“We have dominated games and played quite well at times and got a clean sheet against Hamilton. But too often we have shot ourselves in the foot by giving up easy chances, so we have to stop that happening.

“We know where we have been going wrong.”

The seven-in-a-row title-winners failed to make their outfield superiority count against AEK Athens who are now in the £40million Champions League group stages after their 1-1 draw against Vidi in Hungary last night to progress on a 3-2 aggregate.

Gordon added: “It’s been the story for us the last few weeks. We have had the majority of the ball, not turned it into goals and found ourselves losing goals at the other end from not many chances given up.

“So, that has been frustrating and something we need to sort out and get back to consistently doing what we had been doing over the last two seasons. The quality we have in the team means we are going to dominate most games and dominate the ball.

“It’s about turning that into goalscoring chances for us, concentrating at the back and making sure we are not giving up the few chances from which we’ve been losing goals.

“Every chance we give up seems to go on target at the moment and that’s just the stage we are at.

“We have to focus and get through it and get better for what is a very big week in prospect.”