It has been FIFTEEN years since the Hoops sampled victory in either the Champions League or Europa League – and that will stretch to 16 if they do not produce the performance of a lifetime to overturn Valencia’s two-goal advantage from last week’s 2-0 triumph at Parkhead.

Christie, was hooked before the hour mark against the Spaniards as boss Brendan Rodgers changed the shape of his formation against the Mestalla outfit, but it made no difference in the end on an evening of abject disappointment for the Scots.

The playmaker reflected on Thursday’s mishap and said: “It was frustrating. We started the game perfectly, in our eyes.

“In the first 20 minutes, we dominated possession and looked like we could be a threat going forward.

“But, to be fair to Valencia, they came with a really good game plan. For a team to be playing 4-4-2, you would think we could open them up, but we found it so difficult to break them down and find spaces between their midfield.

“We can only blame ourselves for the defeat, though, because at times our discipline on the ball, and lack of control when we actually had it, cost us in the end.

“We lost the goals from two counter-attacks.

“Going into the game, one of the things you’re looking forward to is coming up against top-class players.

“And while we’re all really deflated and disappointed at the 2-0 defeat, when you look back at it you need to make sure it’s something to learn from.” 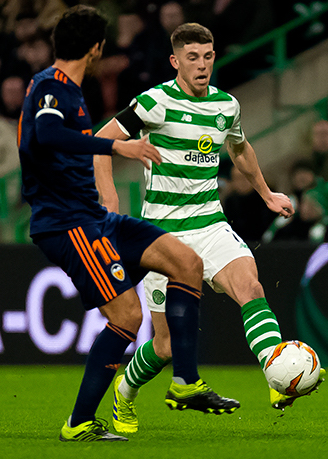 SPANISH SIGHS…Ryan Christie tries to make the breakthrough against Valencia.

Christie said: “I wouldn’t say we took risks. We showed in the first 20 minutes we could play out well even though they were pressing us. We managed to break it and get through it.

“It was just towards the end of the first half and into the second when they were more dropping off the game that we were forcing it, trying to break them down – and that’s when the mistakes came.

“They punished us for every mistake we made and we need to learn from that, because teams in Europe are going to do that to you.

“It’s a learning curve. We don’t have much time to think about it, we need to switch on again for Kilmarnock, but we’ll turn it around and be positive by the time we get to the game over in Valencia.

“If we get an early goal out there, it changes everything.

“We’re far from completely out of it, although, obviously, we’ve given ourselves a hard task.”

Christie has been in a rich seam of form – despite Thursday’s hiccup along with his team-mates – since coming into the team as a  second-half substitute in the Betfred League Cup semi-final win over Hearts at Murrayfield in October..

The Scotland international insisted the champions will pick up the pace again when they face Killie today at Rugby Park, a venue where they last sampled success EIGHTEEN months ago.

He added: “Absolutely, we need to make a statement. We want to rectify the fact we’ve had back-to-back defeats there.

“You don’t want to have records like that anywhere, so we’ll be up for the match and will be chasing all three points.

“We can’t get caught up on what happened on Thursday night, we need to brush it aside and go again in the league.”

* DON’T miss the unbeatable match report and the best action images from Kilmarnock v Celtic this afternoon – only in your champion CQN.