Celtic Quick News on News Now
You are at:Home»Latest News»‘WE’LL BE RELENTLESS,’ VOWS CALMAC
By CQN Magazine on 7th May 2018 Latest News

CALLUM McGREGOR has vowed Celtic will not let up in the run-in to the season.

The seventh successive Premiership title has already been won although the Hoops have still to face Kilmarnock on Wednesday night and Aberdeen on Sunday.

And then Brendan Rodgers’ players can focus on the Scottish Cup Final against Motherwell at Hampden a week on Saturday as they zero in on an unprecedented double treble.

McGregor slotted in at left-back in the 3-1 win over Hearts at Tynecastle yesterday with injured team-mate Kieran Tierney watching from the stand with his pals.

The Scotland international midfielder said: “We have been relentless from the word go and the manager has been the same – he doesn’t allow us to slip up or stop working hard.

“As a result, it’s actually fairly easy to keep our focus ahead of the Cup Final in terms of the league games we’ve still to face.

“Celtic are a big club and the pressure is on every week to win and keep winning and we accept that.”

Boss Rodgers criticised the Tynecastle playing surface and McGregor joined in. He said: “The length of grass was another challenge for us. It was very thick, very long and very dry and Hearts tried to keep it that way to stifle the way we try to play.

“But our lads deserve credit for showing versatility in both sides of the game as we won our tackles and headers, moved the ball forward and played in a little longer style than usual.

“You can moan about it, but, ultimately, you’ve got to go out on the pitch and win the game and that’s exactly what we did.” 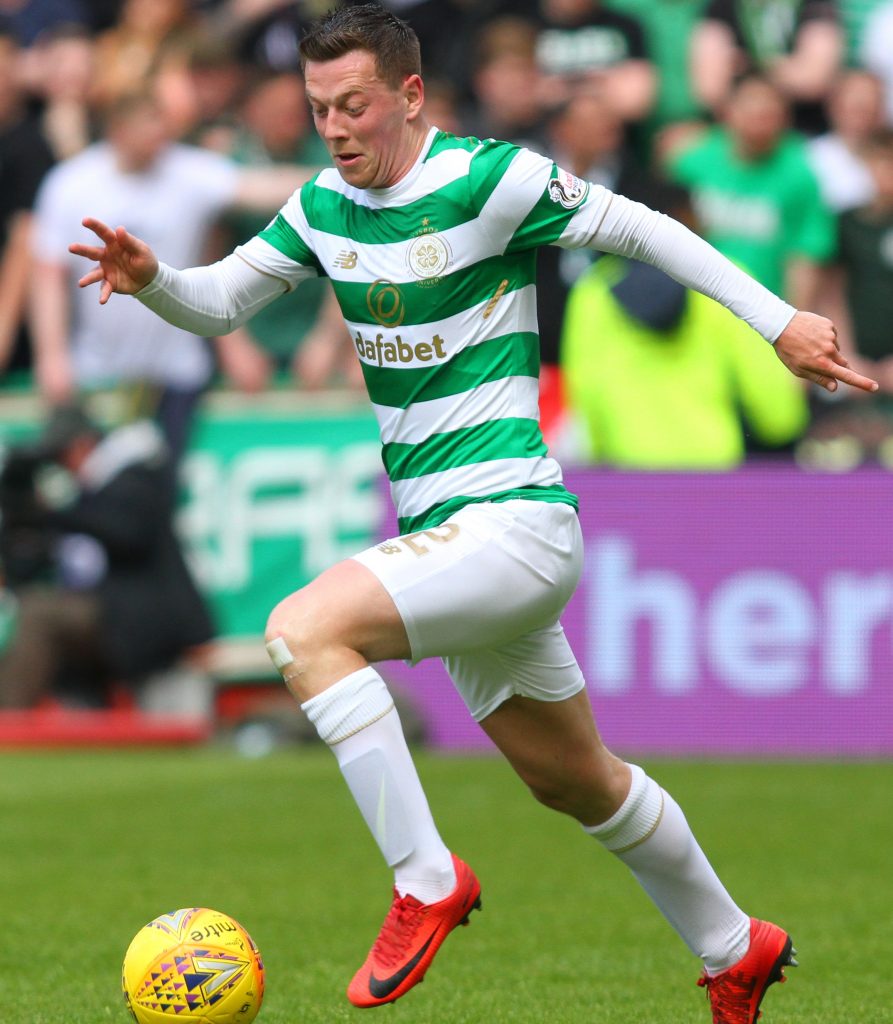 BACK TO THE FUTURE…Callum McGregor filled in for injured Kieran Tierney in yesterday’s 3-1 win over Hearts at Tynecastle. Pic: Geo.

McGregor added: “We knew it was going to be difficult here, especially after the last result. It was in the back of the players’ minds and we wanted to put it right. The 4-0 defeat in December gave us extra motivation to ensure it didn’t happen again.

“We know what Hearts are about. They’re a big, physical team and they’re very direct, so you’ve got to stand up to that challenge to secure a victory and we did that.

“Our equaliser so soon after they scored helped us because it allowed us to establish ourselves in the game. We looked fairly comfortable after that so credit to the boys for digging deep and going on to win 3-1.

“But I don’t think Kieran will be fearing for his position from me. It was fine to step in. I’ve done it a few times and it’s about getting used to the position and having to win your headers and tackles.

“I felt I coped well against a direct team. It was a different challenge for me because usually I play that position at home and you have a lot more possession.

“But I’m happy to accept that challenge as I try to take my game to another level.”