DEPARTING skipper Scott Brown has apologised to the Celtic fans for the team’s wretched season.

The 35-year-old midfielder was hooked on the hour as punters who backed the Celts using a Matchbook Promo Code were left disappointed as 10-man Hoops headed for an embarrassing 4-1 loss at Ibrox yesterday.

It was Brown’s 44th and final Glasgow derby and, like the four previous encounters against Steven Gerrard’s side this term, it ended in disappointment.

The fallen champions have succumbed four times to the Govan club and the best they have managed was the 1-1 draw at Parkhead in March.

The latest confrontation turned on its head in exactly one minute and 16 seconds when Mohamed Elyounoussi struck the bar, the hosts opened the scoring and Callum McGregor was red-carded. It was a whirlwind moment with fate again snarling in the face of Celtic. 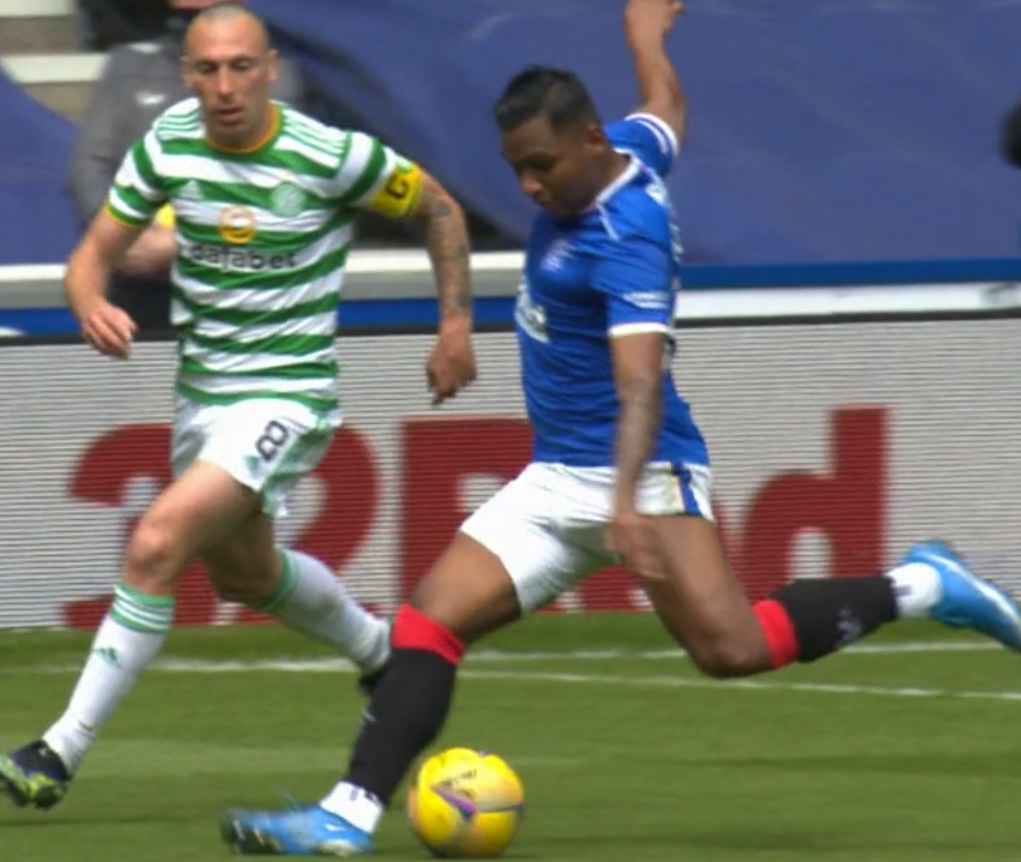 SINKING FEELING…Scott Brown can only look on as Alfredo Morelos prepares to fire in the second goal.

Odsonne Edouard managed a quickfire equaliser, but the visitors presented Alfredo Morelos a second goal where Brown, Kristoffer Ajer and Scott Bain all played their part in allowing the Colombian to score.

There was the usual procession of misses where James Forrest and David Turnbull passed up excellent opportunities to level before Roofe netted a third in the 57th minute.

Three minutes later, Brown’s 14-year derby adventure came to an end when Ismaila Soro replaced him in the anchorman role. The Ivorian didn’t exactly cover himself in glory with a sloppy pass in the fading moments that saw the ball worked to veteran Jermain Defoe who far too easily tricked and teased Stephen Welsh before rolling the ball away from transfixed Bain.

A despondent Brown lamented: “It was a hard game for the fans and we are disappointed as much as they are.

“We’re sorry for letting them down over the whole season because this was supposed to be our showcase season and it wasn’t to be.

“Whoever is in charge, and we have Dominic McKay coming in, as well, I’m sure everyone will be looking forward to a fresh start.

“It’s been a hard season, but Celtic WILL be back next season. 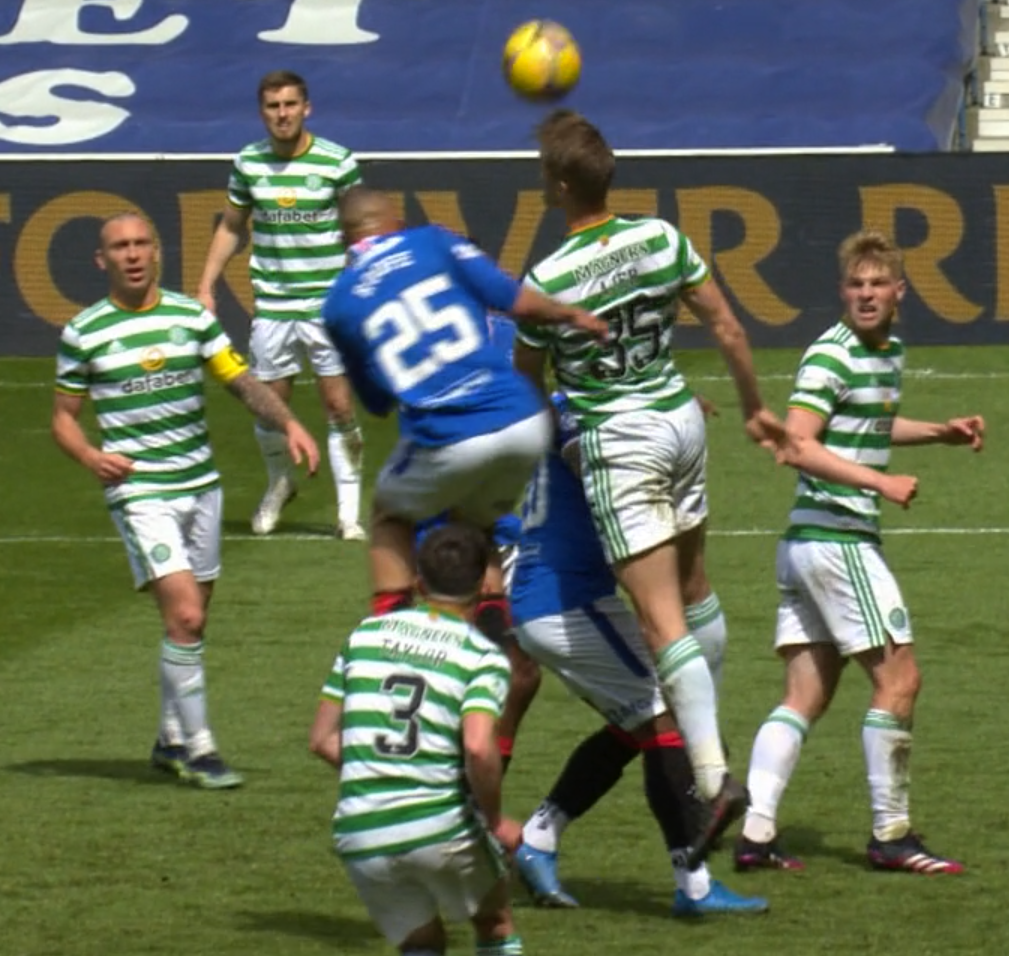 WATCHING ON…Scott Brown watches as Kemar Roofe heads in No.3.

“We have had one really bad season over the last 10, so I’m sure they will be back. I have belief and faith in the players.

“It’s the right time for me to go, it’s a new challenge for me and a new chapter, but this club will be back, it’s a fantastic club.”

The fabulous club servant, speaking to the Daily Record, added: “It’s not about me. It’s about the team, ultimately, and it has been throughout the last 14 years of my career at Celtic.

“There have been ups and downs, but this is definitely a low blow for us. We’ve come here and had some fantastic games and we didn’t deserve 4-1, but it’s hard when you also go down to 10 men.

“The lads fought, the effort was there, it was just always going to be a hard performance with 10 men for 65 minutes. 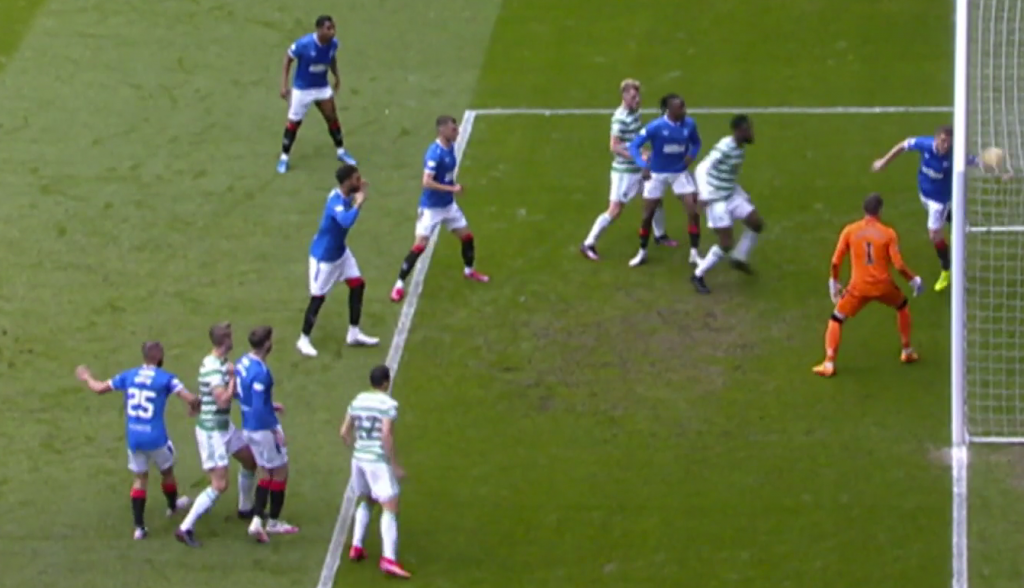 “We kept fighting, we created chances, we were a bit unlucky we didn’t score at the start of the second-half and then they went up the park and scored a goal. It was about us taking the chances.

“We’ve struggled to score goals as a team and defensively, pressing from the front, we’ve not done as well as we probably should throughout the whole team.

“I have to take responsibility for that as well because I’m the captain on the park.

“It’s not just John Kennedy it’s everyone together, we take the responsibility, too, and we’re not shying away from that.

”I’m sad to be going, but it’s the right time for me. It’s a huge fixture, Rangers versus Celtic and, to be fair, I’ve enjoyed them. I’ve had some great memories in them as well as some disappointing ones.

“I’ve got two games left at Celtic and I need to make the most of them.”