SHANE DUFFY has quit Celtic’s Dubai training camp and returned to the UK for personal reasons.

The on-loan Brighton centre-back headed back to London, but suggestions he is cutting short his temporary transfer at his boyhood idols are off the mark, according to a report in the Daily Record.

Family matters necessitated the Republic of Ireland international’s return and the Hoops insist he will be back at Parkhead when they prepare to take on Hibs on Monday night as they attempt to continue their uphill bid for the tenth successive title.

Duffy has struggled since his summer arrival on a season-long switch that will cost the Hoops £2million. 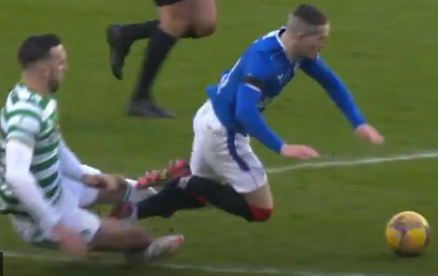 BOOKED…Shane Duffy heads for a yellow card after a challenge on Ryan Kent.

Two goals in his first two games against Ross County and St Mirren led to optimism for the rugged 29-year-old defender, but he has failed to convince as the team have been embarrassed at home and abroad.

He came on as a substitute after Nir Bitton’s red card at Ibrox on Saturday and five minutes later Callum McGregor’s own goal sealed a remarkable win for Steven Gerrard’s side who moved 19 points clear at the top although their city neighbours have three games in hand.

Christopher Jullien is expected to miss the remainder of the season with a knee problem and Neil Lennon will step up his efforts for a new back-four operator. There appears to be no place in his plans for Duffy who was also booked at the weekend for a lunge on Ryan Kent.

The player will return south and could become a target for his former Brighton boss Chris Hughton who is now in charge at Nottingham Forest.