FORMER Celtic star Darren Jackson insists Ange Postecoglou has to find a way of setting out a team to win UGLY.

The ex-Scotland frontman was part of Wim Jansen’s team that halted Rangers’ pursuit of 10 in a row in 1998 and acknowledges the Hoops’ trademark for entertaining and attractive football.

However, Jackson knows the most important thing is winning and, although the Greek-Australian has earned great praise for his free-flowing style of football since arriving in June, the team have faltered and have dropped an alarming 11 points in seven Premiership outings.

The Hoops were held to a 1-1 draw by Dundee United at Parkhead on Sunday which saw them stuck in sixth place in the table, six points adrift of Steven Gerrard’s Ibrox side. 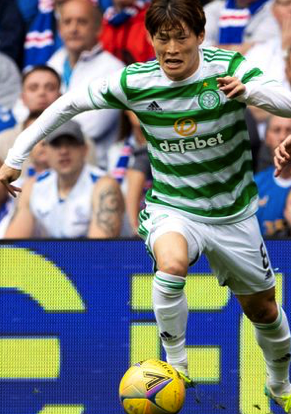 Jackson believes something has to change and the one-time hitman said: “The manager will probably say injuries and no consistency of team selection is part of the problem right now, but it’s not good enough.

“Coming off the back of the Livingston result, you have to win the next game at home without doubt and they didn’t.

“It doesn’t matter how you do it. Winning ugly at times is as important as playing nice football at times and winning comfortably.

“Everyone wants to play total football, but I played in Celtic teams when you just had to win.”

Japanese international Kyogo Furuhashi and Greek attack-leader Georgios Giakoumakis, signed on deadline day and still waiting to make his first appearance, are both sidelined through injury with Albian Ajeti the sole striker left for Postecoglou.

FLAT OUT…Albian  Ajeti is grounded after failing to connect with a Liel Abada cross in the 1-1 draw with Dundee United.

The £5million buy from West Ham last summer has scored three goals this term – and nine in total – and Jackson thinks he has to offer a bit more with the team struggling.

The much-travelled forward who also had spells at Hibs and Hearts, speaking to Sky Sports News, added: “With Ajeti, if you put the ball into the box then he will score you goals.

“But outside the box, he doesn’t take defenders away or take them long or short to create space for others.

“That’s where I think Celtic are missing Kyogo who does that.

“Celtic didn’t move them about enough, it was a slow tempo, which only picked up when the two wide men got the ball.”