TWO of Celtic’s brightest starlets, Joe Thomson and Aidan Nesbitt, are gearing up for the second half of the season in the Championship.

Thomson will be on loan at Queen of the South while Nesbitt has agreed to a contract extension with Jim Duffy’s Morton.
Midfielder Thomson believes joining a full-time team on a temporary transfer is a vital next step in his progression following a spell at Dumbarton in the first half of the campaign.
He made his last appearance for the Sons in their shock win over title contenders Dundee United on Saturday before Palmerston boss Gary Naysmith persuaded him to join the Dumfries outfit.
The 19-year-old, who made his Hoops first team debut in September 2015 and penned a new two-year contract last summer, said: “It’s obviously the next progression for me. 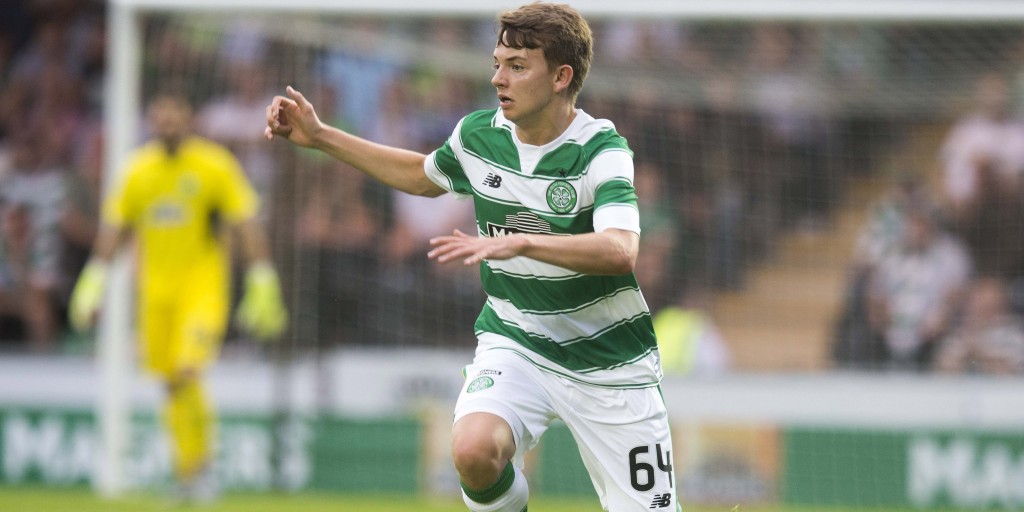 “I had a part-time loan with Dumbarton and I loved my time there, but Queen of the South were interested and they are full-time so it was a progression I wanted to take at this stage in my career.
“I had spoken to Chris McCart and he said that it would be better if I got a full-time team and I obviously I’ve done that. I’ve played against Queens twice this season and they have good players, so I am looking forward to the rest of this season and we will see what happens.”
Thomson could make his debut for Queens tomorrow when they take on rock-bottom St Mirren in Paisley.
At Morton, Nesbitt, 19, agreed to an extension yesterday that will see him remain at the Cappielow club until June 9.
The talented attacker said: “Manager Jim Duffy made it clear to me a few weeks ago that he wanted me to stay until the end of the season.“He just said: ‘You don’t need to tell me anything just now. Go away, think about it and then come back to me.’ Last week, I went back and said I was happy to continue.

“Obviously, I also spoke to Celtic and they are happy for me to stay, as well. They send scouts to every game, so there are always people watching me and Jamie Lindsay.

“Chris McCart emphasised that Morton are doing so well, I’m playing games, and that it was a good move for me to stay.

“Before I went out on loan I was speaking to Brendan Rodgers and he said it would likely be that I would stay here until the end of the season. I think Chris and him would’ve assessed it again recently and decided the right thing was for me to stay here.“I’ve made 17 appearances – 11 of them have been starts – and in the first six months of the season, the team have done really well.

“We got to the semi-final of the League Cup and we’re sitting third in the league. The momentum and confidence is increasing, and that is a good thing for us to go and excel even further.

“It’s brilliant here. All the lads in the dressing room are a good bunch and, as I said, we’re doing well. So if you are playing football and you’re winning, what’s not to enjoy?”