Celtic Quick News on News Now
You are at:Home»Latest News»£2m GO-AHEAD FOR NON-STOP MAEDA
By CQN Magazine on 9th May 2022 Latest News

DAIZEN MAEDA hit the ground running in his Celtic career when he scored inside four minutes of his debut in the 2-0 win over Hibs at Parkhead in January.

It was only 18 days after the Japanese striker moved to Scotland on an initial loan move from Yokohama F Marinos where he had played under the guidance of Ange Postecoglou before the Greek-Australian accepted the challenge of becoming Neil Lennon’s long-term successor in June.

Maeda was one of a trio of J-League arrivals on Hogmanay along with midfielders Reo Hatate and Yosuke Ideguchi who joined countryman Kyogo Furuhashi who blazed the transfer trail when he agreed a £4.6million switch from Vissel Kobe in July.

The pacy international hitman has played virtually non stop since February last year and there have been fears of burn-out for the Oriental recruits, as CQN reported last week. 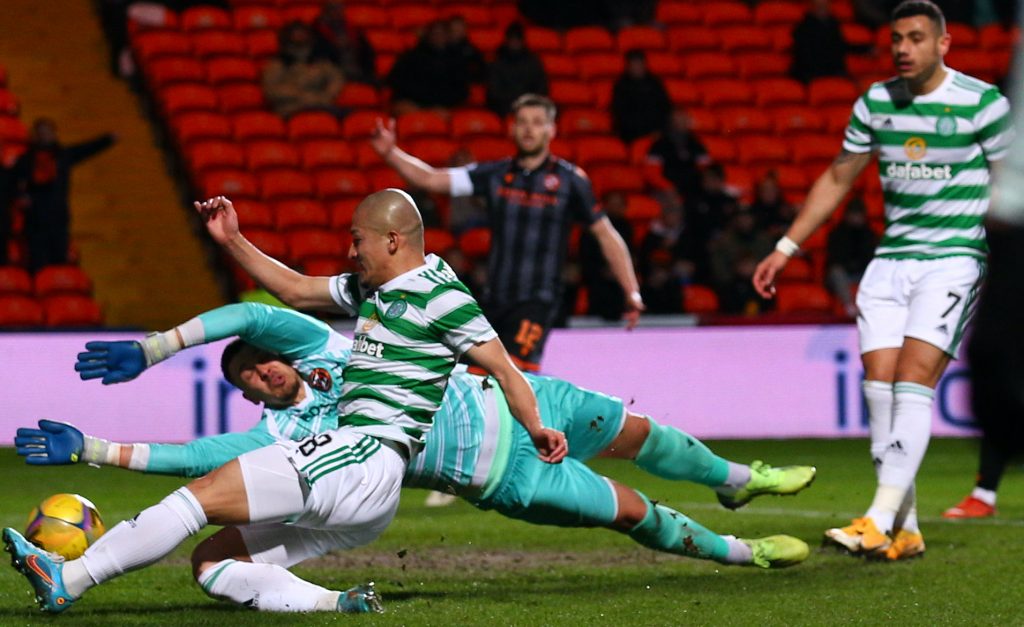 ROBBED…Daizen Maeda squeezes the ball past Dundee United keeper Benjamin Siegrist the last time he played at Tannadice in March – but his ‘goal’ was wrongly ruled out by referee John Beaton. Giorgos Giakoumakis, who claimed a double in the 3-0 win, gets a close-up view of the action.

The 24-year-old attacker, who claimed the Hoops’ leveller – and his eighth Hoops strike – in the 4-1 win over Hearts at the weekend to just about seal the title, has admitted he is looking forward to taking a breather to recharge his batteries before getting back into the thick of the action once again.

Maeda said: “I am happy here, but I am looking forward to resting.

“I have been playing since the beginning of last season in Japan.

“I will have to take enough rest to be ready to go again next season. I want to be at my best next season.

”I know that last year Celtic couldn’t get the title.

“This is why when I came here I wanted to give absolutely everything to get a result for the team. I am happy with the way the move has turned out.

ON THE RUN…Daizen Maeda speeds into attack.

“There is not a big difference between Celtic and Rangers, both teams play at a good level.

“But our manager brought a good attitude to us. He made us think the right way.”

Maeda acknowledged the presence of compatriots Kyogo, Hatate and Ideguchi at Parkhead and, speaking to the Scottish Sun, continued: “It’s nice to be with my countrymen, of course, but we have to concentrate on football over everything else.

“In terms of next season, we would like to play here as Japanese players together and keep getting stronger and better over a full season.”

Celtic travel to Tannadice in midweek to take on Dundee United where a point will make absolutely certain the crown will be returning to the east end of Glasgow. Postecoglou’s men have a six-point advantage and a twenty goal superiority over the ri nearest challengers with just two games to go. 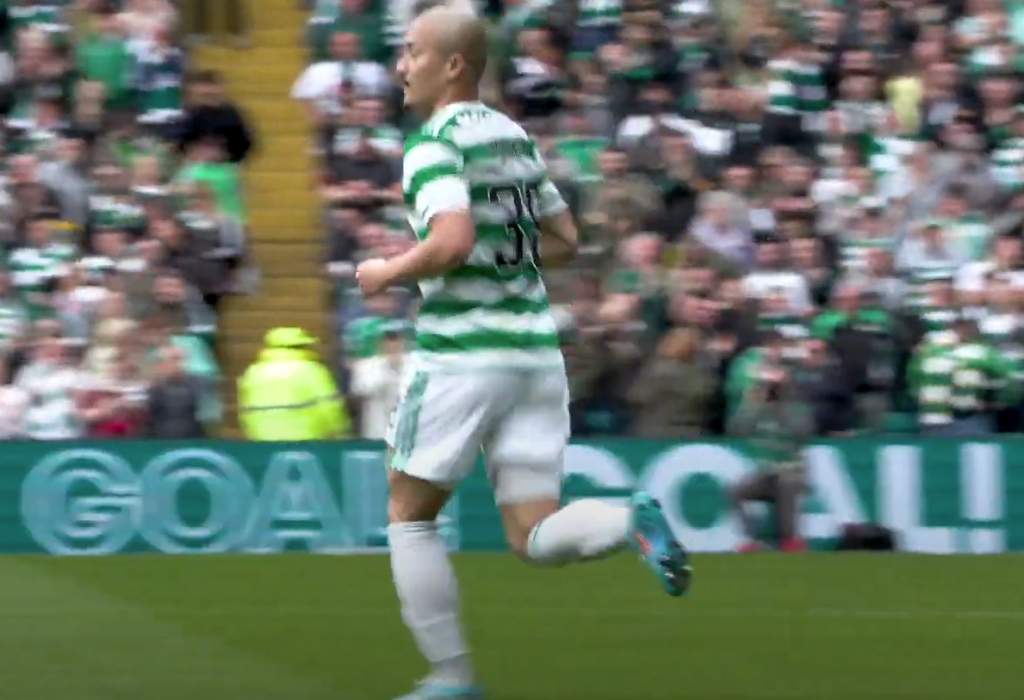 SIGNS ARE GOOD…Daizen Maeda races away after scoring the equaliser in the 4-1 win over Hearts.

The stage is set for Flag Day in Paradise on Saturday when Motherwell will provide the opposition in Postecoglou’s sixtieth competitive game in charge since his whirlwind arrival in the summer.

Maeda is looking forward to experiencing the moment with 60,000 fans at the weekend, but added: “Next week, as always, we hope we will get to share the happiness we feel with our fans and supporters.

“It wasn’t only against Hearts. Celtic fans are like that for us always and I am really happy to be here playing in that amazing atmosphere. It makes me happy.

“The weather has even improved recently and it feels very comfortable to live here now – I like it!

“But we don’t have the league title yet, so I will only think about that when everything is settled.”

Maeda will now go through the formality of signing the £2million deal which will keep him at Celtic until May 31 2025 at least.

The Postecoglou jigsaw continues to come together.