NEIL LENNON has admitted he was “surprised” at the dramatic twists and turns in the David Turnbull transfer saga before the £3.25million Motherwell midfielder headed back on course for Celtic.

One minute the deal was on and the next it was off with the 19-year-old failing to agree personal terms after the clubs had settled on a fee.

Newly-promoted Norwich City entered the picture to match the Hoops’ offer and top the reported £12,000-per-week in wages on the table from the champions.

The Parkhead boss had written off the move by that stage, but, after talks with the Carrow Road outfit, Turnbull performed a remarkable U-turn and arrived back in Glasgow prepared to pen a four-year contract.

The supporters were left somewhat bewildered at the hesitancy of the player to join the eight-in-a-row champions.

But Lennon, speaking to the Daily Record, admitted: “I wouldn’t have thought there would be a problem with the fans. Once he signs, that will be it.

“Once the fans are aware he’s chosen Celtic over a Premier League club they will be very impressed with that, as well.

“Listen, you’ve got to take it from David’s point of view as well and his representative’s. They’ve got to look at all of the options before they come to conclusions.

“I know we’re a big club and a big draw, but there are other mitigating circumstances that maybe we don’t know about, that might’ve prolonged the signing. 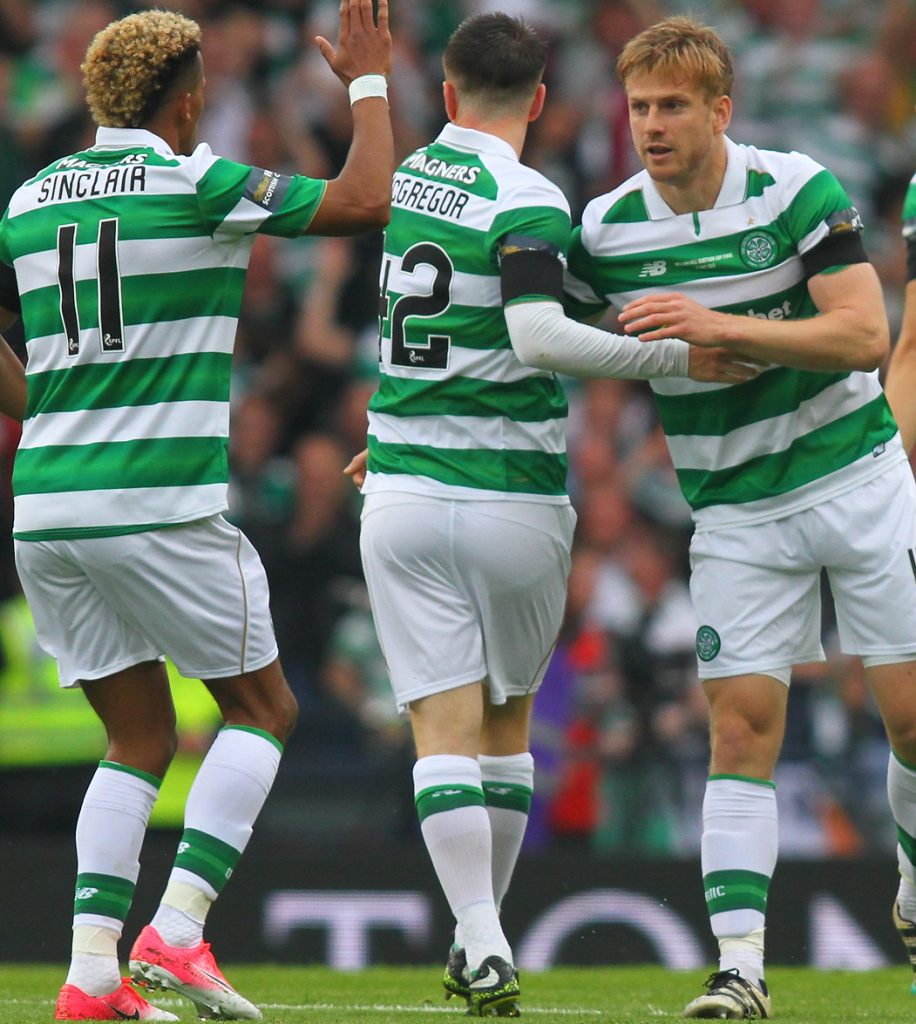 THE MISSING LINK…Celtic havebeen without the goal threat of Stuart Armstrong, seen here being congratulated by Callum McGregor and Scott Sinclair after his equaliser against Aberdeen in the 2017 scottish Cup Final.

“Yes, I was surprised as I was under the impression he might have wanted to go elsewhere, but then he’s had a serious think about it and decided he wants to come to us.

“I spoke to him on two or three occasions after the fee had been agreed and, again, it was all very positive. But David had to listen to his advisers, that’s what they are there for.

“There were a few twists and turns, but in the end I think the player himself decided we were the best option for him, which we agreed with.

“To choose us over a Premier League club is quite a statement from our point of view.”

Lennon reckons the Scotland Under-21 international playmaker could be the ideal replacement for Stuart Armstrong who was sold to Southampton for £7million last summer.

He added: “We’ve been tracking him for a while. He’s a fantastically gifted young Scottish player, so we want to try and get the best out of him in the coming years.

“He’s quick, an impressive character they way he plays and way he handles himself off the field. There’s a maturity about him for someone of such a young age. He’s an Armstrong type. I felt we were lacking that a bit.

“Last season, we played a lot in front of teams and he’ll be someone who goes beyond. I also think he’s a good finisher once he’s in position.

“Technically, he’s proficient with both feet and manipulates the ball very well.

“I think we need more goals from midfield and, hopefully, David will provide them.

“It’s always the sign of a good player that he constantly appears to have time and space on the ball.

“Amid the hurly-burly they appear to slow the game down, but they don’t really. It’s just his composure. His stats are excellent.

“For someone so young, they explode on to the scene that way. He was too good a talent for us to ignore.”