AWESOME Odsonne Edouard claimed two goals in a three-minute salvo to demoralise a gallant Dingwall side at Parkhead this afternoon.

The French ace was introduced as a substitute for Leigh Griffiths in the 63rd minute and, following a whirlwind impact, he took a slender one-goal advantage to 3-0 with two typical efforts.

The victory moved the eight-in-a-row champions onto a five-point lead at the Premiership pinnacle with Steven Gerrard’s Ibrox outfit due to play Hearts at Tynecastle tomorrow.

The arrival of the flamboyant frontman made the difference and his quickfire second goal was so typical of the lavishly-gifted personality. He knew exactly what he was going to do when the ball dropped to his feet. Three touches opened up the Ross County rearguard and he lashed the ball low into the far corner. 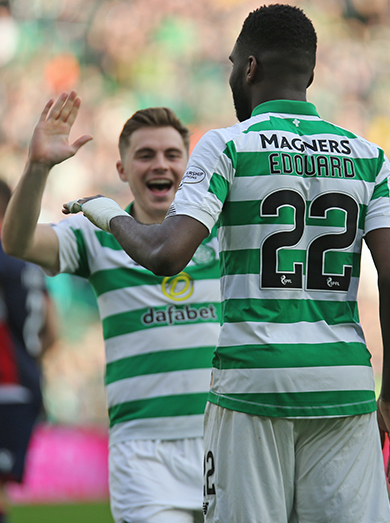 PRIZE GUY…Odsonne Edouard is congratulated by James Forrest after another goal.

In the 10th minute, the Hoops, who had opened in lively fashion, came close to claiming the breakthrough goal when Christopher Jullien powered in a header that struck keeper Nathan Baxter and the ball was scrambled to safety.

Griffiths was looking eager as he led the line with admirable zest while James Forrest, in his first outing of the year, and Mikey Johnston, a late substitute in the 3-1 win over Kilmarnock in midweek, also showed an appetite to get involved in the action as they raided on the flanks.

Griffiths menaced in the 18th minute with a low right-foot effort, but it whipped wide of the upright.

There was a scare for the home side three minutes later when Josh Mullin got clear in the box, but he tried to chip 6ft 7in Fraser Forster – no easy task – and the ball drifted high over the crossbar.

It was still a warning sign for the champions, though.

The game ebbed a flowed and Jullien thumped a header wide from a corner-kick delivery and then the Highlanders passed up a wonderful opportunity in the 26th minute to rock Neil Lennon’s men.

Blair Spittal was presented with the chance in a great position and it looked as though he had to hit the target at the very least, but, amazingly, he screwed the ball yards past the post.

The Hoops’ response was immediate and Forrest fired in a strong header which brought an excellent save from the alert Baxter. 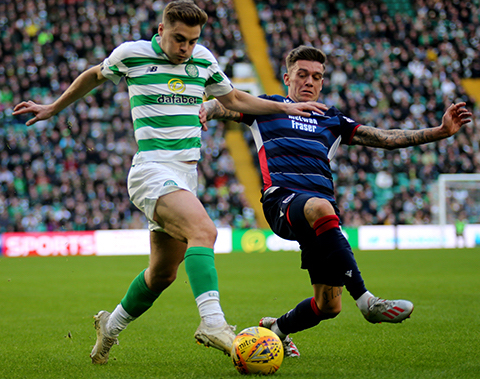 ON THE RUN…James Forrest drives forward into enemy territory.

The action switched again to the Celtic goalmouth as the central defence of Jullien and Jozo Simunovic continued to live dangerously and looked slow to react to the Highlanders’ breakaways. On this occasion, Don Cowie was presented with a reasonable opportunity, but his attempt was lacking accuracy.

However, in the 36th minute, Simunovic showed his artistry going forward when he threaded a ball into the tracks of Johnston and the winger was sent tumbling following a reckless challenge from Keith Watson. It was a stick-on penalty-kick and referee Kevin Clancy had no hesitation in pointing to the spot.

Celtic’s designated penalty-taker Ryan Christie, who missed in the last game in the east end of Glasgow, was missing as he sat out the third match of his ridiculous three-game suspension.

Callum McGregor accepted the responsibility and strode forward confidently to slide a left-foot drive low into the net past the despairing Baxter at his left-hand side.

Only moments later, the midfield anchorman attempted to double his side’s advantage, but his angled effort was off target.

The Hoops brought down the curtain on the first-half with 70 per cent possession and eight corner-kicks, but County had displayed threatening flashes on counter-attacks, so it was far from over as the players trooped off at the interval. 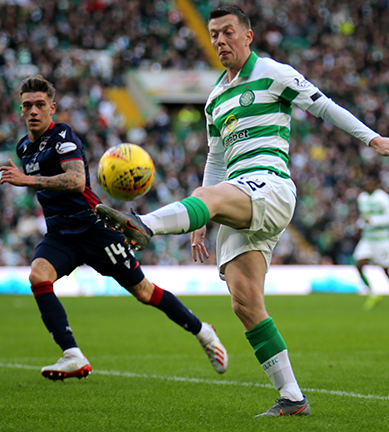 BEST FOOT FORWARD…Callum McGregor who claimed the opener from the penalty spot.

Former Hoops prospect Marcus Fraser was taken off after only a couple of minutes into the second period with Richard Forster taking his place.

Moritz Bauer, booked for kicking the ball away against Killie in the fading moments, was yellow-carded again in the 51st minute for a challenge that didn’t quite please the match official.

Celtic lacked oomph and the fans were becoming restless. Lennon reacted by taking off Griffiths in the 63rd minute as he introduced Edouard from the subs’ bench.

Incredibly, the Frenchman’s first touch was to score the second goal following a McGregor corner-kick.

The champions’ talisman was in the right place at the right time as the midfielder’s deadball effort drifted towards him and he showed his usual composure as he knocked the ball almost nonchalantly into the inviting net from close range in the 65th minute.

Edouard, remarkably, scored his second goal in three minutes as he flattened the resistance of the Highlanders. 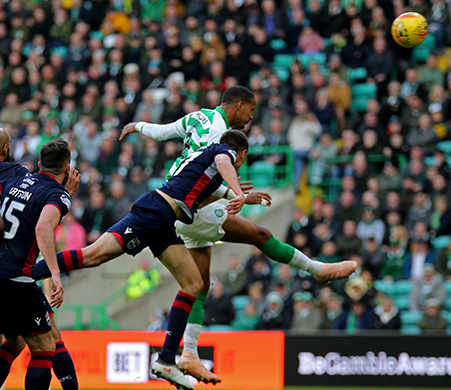 Forrest sent a pass into the tracks of the galloping hitman and he took a touch before sending a stinging right-foot shot low past Baxter.

It was an outstanding introduction to the confrontation for the forward who had taken his season’s tally to 20 with effortless ease.

Johnston had the chance to hit a fourth, but his attempt was scrambled clear when it appeared he had to score.

Two minutes later, Tom Rogic replaced Olivier Ntcham as the Hoops turned the screw as they chased even more goals.

Karamoko Dembele was given the opportunity to show his qualities when he replaced Johnston near the end of the game. The youngster, who will celebrate his 17th birthday next month, was making his second appearance of the season after another cameo against Cluj in Romania last month.

Celtic have now won all three encounters of 2020 since the campaign restarted. Now for St Johnstone in Perth on Wednesday. So far so good.