Celtic Quick News on News Now
You are at:Home»Football Matters»‘CELTIC CAN RULE FOR ANOTHER FOUR OR FIVE YEARS – AT LEAST,’ MILLER
By CQN Magazine on 10th March 2018 Football Matters

JOE MILLER insists Celtic will win at Ibrox tomorrow and continue their domination of Scottish football for at least another “four or five years”.

The former Hoops hero is convinced Brendan Rodgers’ men will enjoy their fourth successive triumph at the home of their Glasgow neighbours on their way to making it seven titles in a row.

Miller said: “Celtic will bring their ‘A game’ to Ibrox. They will be well up for this one, that’s for sure.

“I can see them winning and kicking on for the remainder of the campaign.

“This is always an extremely important month in the football calendar. It was the same in my time with Billy McNeill at Parkhead and Alex Ferguson at Pittodrie.

“They stressed how crucial it was to maintain your progress, get round the turn of the year and keep your focus.

“You have to make sure all your good work earlier in the season does not go to waste.

“Everything is in front of you and you know what you have to do if you hope to be successful.

CUP WINNER…Joe Miller strokes the ball beyond helpless Rangers keeper Chris Woods for the only goal of the game in the 1989 Scottish Cup Final. Not so happy are Terry Butcher, Richard Gough and Gary Stevens.

“Celtic may have taken a wee bit of stick in recent months and some critics have been saying they haven’t matched the form of Brendan Rodgers’ first term.

“Listen, the opposition have made it extremely difficult this time around for my old team. No-one wants to be on the receiving end of a thrashing.

“Teams have faced Celtic with precious little pretence at attack and have attempted to strangle the game. It’s not pretty to watch, but that’s hardly the fault of the Parkhead side.

“With dull and stubborn outlooks like that some games will be a bit scrappy, but you can only beat what is put in front of you.

“The mere fact Celtic have already won the only domestic trophy, the League Cup, that’s been up for grabs, are in the semi-final of the Scottish Cup and can go nine points clear at the top of the Premiership with a game in hand is surely testimony to what they are continuing to achieve.

“And that’s why I believe they will win tomorrow. Celtic will put down another marker on this occasion.

“Three more points will push them in the right direction and I genuinely think they will continue to dominate Scottish football for at least another four or five years.”

Miller also dismissed the remarks of former Ibrox boss Graeme Souness who reckoned a win for his old team would be good for the domestic game.

The 50-year-old Glaswegian, who scored Celtic’s winning goal against Souness’ side in 1989, said: “I can’t agree with that comment.

“He is saying competition is required to prevent it being a one-horse race up here. Obviously, it’s going to take a lot more than a solitary result to turn things around.

“For a start, compare Celtic’s budget to any other team in the country. There’s no-one who could even come close to competing at that level of spending power.

“Looking at the bigger picture over the next few years, every other club in the land would need huge cash injections.

“In the present financial climate, I can’t envisage that materialising. Celtic, for me, will just stronger and stronger and continue to rule for the foreseeable future.

“Graeme Murty’s side will do their best to upset their progress, but I can’t see them inflicting a first defeat in this fixture on Rodgers.

“Ibrox can be a hostile place for the opposition to try to play football, but Celtic have handled it okay in their previous three visits over the past two seasons as the statistics emphasise. 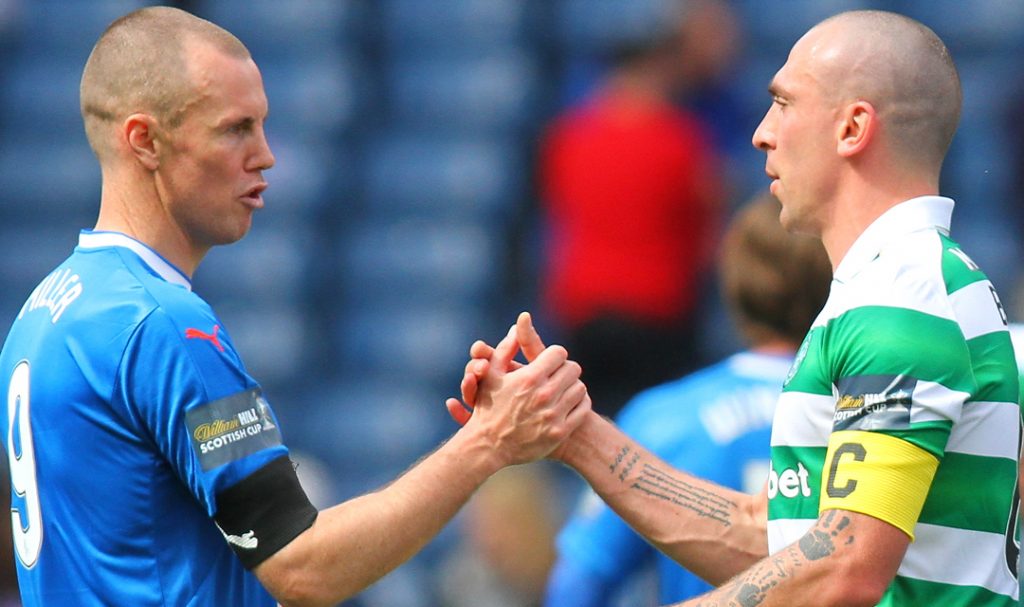 DELIGHT AND DESPAIR…the mood of captains Scott Brown and Kenny Miller are in stark contrast after Celtic’s runaway 5-1 success at Ibrox in April last year.

Miller also believes Hoops skipper Scott Brown will be his old club’s key performer in the midst of the thunder and fury of this fixture.

He added: “Scott is a great leader for the rest of the players. He is a fabulous motivator with the ability to inspire those around him.

“I can see him setting the tempo, winning early tackles and basically being a massive influence on the entire 90 minutes.

“He will look to stamp his authority on proceedings right from the off and I can only envisage him leading Celtic to their fourth successive win at Ibrox.”