CELTIC will face stiff opposition if they step up their interest in Manchester City centre-back Ko Itakura.

Bundesliga outfit Borussia Monchengladbach have entered the race for the 26-year-old Japanese international, according to a report on Sky Sports.

The 25-year-old 11 times-capped versatile ace who can also operate in midfield spent last season loan at Schalke and helped the club back to the top flight.

However, the newly-promoted side have been unable to match Pep Guardiola’s £5.2million valuation on the stylish defender and that has left the door open for interested clubs to take the player in a permanent deal. 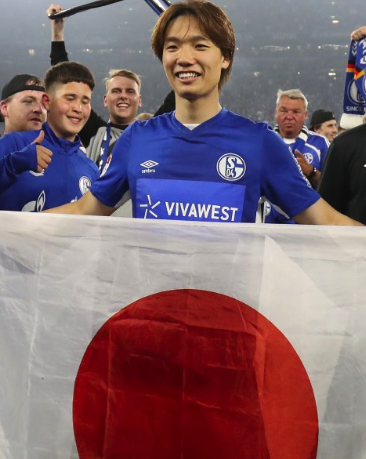 THE RISING SUN…Ko Itakura celebrates after helping Schalke back to the Bundesliga last season.

Itakura arrived at the Etihad in June 2019, but has since completed a two-year temporary spell at Dutch outfit FC Groningen and 12 months in the German second tier. Fulham and Bournemouth, who both won promotion to the Premier League last season, are reportedly keen on the player. Hoffenheim and Frieburg have also been mentioned.

Ange Postecoglou is aware of Itakura’s qualities after his years in charge at Yokohama F Marinos and is a long-term admirer of the cultured defender, as CQN reported a YEAR ago.

The Greek-Australian is eager to bring in another centre-back and the player could join his Japanese contingent of Kyogo Furuhashi, Daizen Maeda, Reo Hatate and Yosuke Ideguchi.

City want to cash in on the player this summer with Itakura a free agent at the end of next season.