Celtic Quick News on News Now
You are at:Home»Latest News»CELTIC GOAL HERO ‘ONE OF THE MAIN CULPRITS’
By CQN Magazine on 1st August 2022 Latest News

FLAMBOYANT Filipe Jota was the Parkhead pin-up with his stunning 25-yard strike against Aberdeen that sealed the 2-0 success on the opening day of the Premiership.

However, perfectionist Ange Postecoglou wasn’t satisfied with some of the Portuguese flyer’s other contributions with the champions fail to kill off the opposition.

The Hoops were already a goal to the good after Stephen Welsh’s glancing header from Matt O’Riley’s right-wing corner-kick inside three minutes.

PREMIERSHIP OPENER…Stephen Welsh (extreme left) watches his header zip into the Aberdeen net inside three minutes in the 2-0 win.

But it took until 15 minutes from time to ease some tension when Jota rifled in an unstoppable drive and the £6.5million tricky touchline ace admitted the goal “was probably one of the best, yeah.

“It was definitely a good moment for me and in my career. I just got the opportunity to shoot and it went in. I get on the pitch and sometimes I just go blind!

“Sometimes it’s difficult to listen to what is happening in the stands because we are so focused on doing the right thing that we just go blind. It’s a flow moment. I was very happy.” 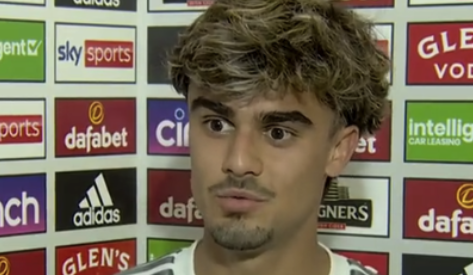 SCREEN STAR…Filipe Jota speaks to the media about his wonder strike.

Jota is enjoying life in Paradise after agreeing a four-year contract with a 12-month option in the summer and he continued: “Just being part of this football club and the philosophy that runs now throughout the club.

“I’m just grateful for everything. It’s good to be back, it’s good to do the things I love the most, which is to play football.

“The most important thing for me was that we started on the right foot this season in the Scottish league, so now we have to keep working and be better in every game. We are not in last season, everything starts from zero now.”

Postecoglou, though, reckoned the 23-year-old former Benfica starlet can do better. 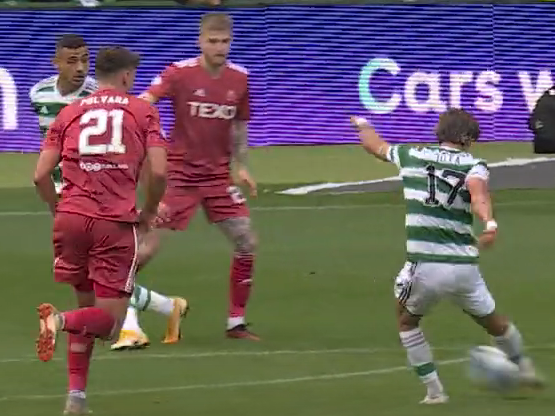 THE GOLDEN BHOY…Filipe Jota thunders in his right-foot drive for the killer second goal.

The Celtic gaffer, speaking to the Daily Record, added: “There is no doubt the boy has talent and he is determined to be the best footballer he can be.

“But, he was one of the main culprits in the last 15 minutes of the first-half. He was wasteful with the ball and he gave away possession when he didn’t have to.

“These are the kind of things we have to avoid. We have to keep these guys on track and not let them get away from the things we want them to do.

“The good thing is he addressed it at half-time and in the second-half, not just his goal, but his general play was really good. He was dangerous, threatening and doing the team stuff, as well.”