CELTIC are poised to make a £2million bid for Paris Saint-Germain starlet Edouard Michut, according to report in Sky Sports News.

It is claimed Ange Postecoglou wants to bring the 19-year-old midfielder to the champions as he looks to strengthen his midfield.

The Greek-Australian gaffer has seen Tom Rogic, Nir Bitton and Ismaila Soro leave Parkhead since the end of last season to leave his squad short of options in the middle of the park.

French Under-19 international Michut, who has come through the French giants’ youth ranks, has made eight first-team appearances and still has a year to run on his contract. 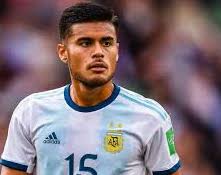 TARGET MAN…Brazilian ace Fausto Vera has been linked with Celtic.

The last dealing the Hoops had with PSG was in the summer of 2017 on loan before the club paid £9million to make the move permanent. He moved onto Crystal Palace last August in a £18.5million switch.

Postecoglou is also reportedly interested in £5.5million-rated Fausto Vera, but the Argentinos Juniors star has also attracted the attention of Corinthians and Belgian outfit Gent who are believed to have had offers knocked back for the 22-year-old highly-rated Brazilian.

Looking to the future, the Hoops have also made a £125,000 bid for St Mirren’s 17-year-old middle-of-the-park performer Dylan Reid and are awaiting an answer from the youngster.