CELTIC will have a look at Azerbaijan Under-21 defender Bahlul Mustafazada.

The centre-back has spent the last two years at Gabala and is poised to leave his local club at the end of his contract.

Mustafazada, 22, has been invited by the Hoops for a summer trial as the champions look to add to their central defence with Dedryck Boyata heading for the exit as a free agent and Filip Benkovic returning to Leicester City at the end of his loan deal.

The Azerbaijani has made 10 appearances for his nation’s Under-21 side and has also recently been called up to the full squad, according to the Daily Record.

He played in the Europa League this season against Progres Nierderkorn, who knocked out Pedro Caixinha’s Ibrox side, with the Luxembourg team winning 2-0. 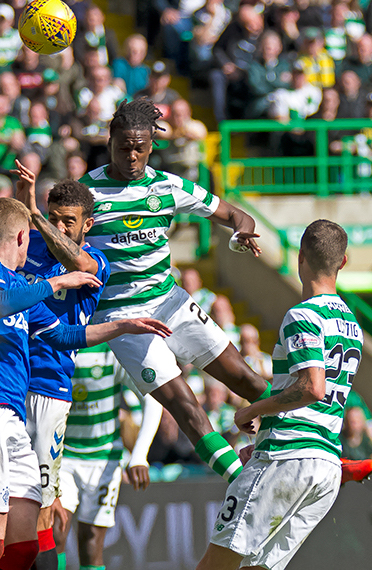 THE END GAME? Dedryck Boyata clears from Connor Goldson in what could be his last appearance for Celtic.

The stopper is a product of his club’s youth academy and was also loaned to local club Sumgayit last year.

As well as Boyata and Benkovic likely to be on their way, the Parkhead men have problems over Jack Hendry who tore a hamstring playing for the reserves earlier in the week.

The £1.2million buy from Dundee in January last year has made only 15 appearances for the top side in this campaign and next season the champions could be replying heavily on Jozo Simunovic and Kristoffer Ajer in the middle of the rearguard.

Marvin Compper, who arrived in a £1.2million switch from RB Leipzig around the same time as Hendry, hasn’t even played a full 90 minutes in that period and will not be considered an option.