Celtic Quick News on News Now
You are at:Home»Latest News»CELTIC v RB LEIPZIG: ALL YOU NEED TO KNOW
By CQN Magazine on 8th November 2018 Latest News

* CELTIC know a defeat against RB Leipzig tonight could end their hopes of European football in 2019 – with two Europa League Group B games against RB Salzburg and Rosenborg still to play. If the Austrians avoid defeat against the Norwegians and Brendan Rodgers’ men lose, they will be eliminated.

* BOTH clubs have recorded a victory against Rosenborg and a defeat against Salzburg prior to their first head-to-head in Germany a fortnight ago – a match won by the hosts 2-0 with first-half strikes from Brazilian striker Matheus Cunha and Portuguese winger Bruma.

* IF the Bundeslgia outfit complete the double over the Hoops, they will be through to the round of 32 should Rosenborg fail to beat leaders Salzburg in the other group encounter.

* CELTIC and RB Leipzig had never met in European competition before matchday three, when the Germans faced Scottish opponents for the first time.
* THE Hoops have won only three of their 23 matches against German opposition – losing 15 and drawing three – and none of the last 10 – seven losses and three draws. They have also been defeated in six of 11 at home. Their last victory was 3-1 against VfB Stuttgart in the fourth round of the 2002/03 UEFA Cup. 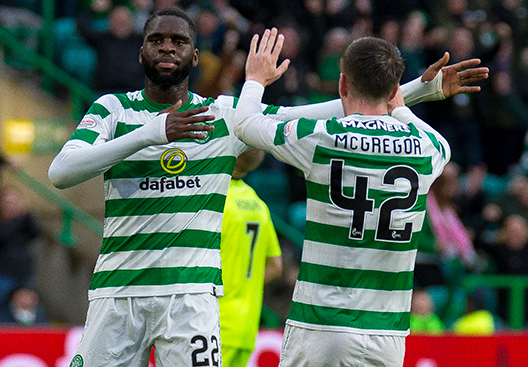 ODSONNE EDOUARD, about to be congratulated by Callum McGregor after a strike against Hibs, was a French Under-17 team-mate of RC Leipzig’s Dayot Upamecano.

* CELTIC won the treble of Premiership, Scottish Cup and League Cup for the second successive season in 2017/18, but they were unable to secure a hat-trick of Champions League group stage appearances this term, their elimination of Rosenborg followed by defeat to AEK Athens. A 4-1 aggregate victory over Lithuanian champions Sūduva in the Europa League play-offs maintained their interest in Europe.

* THIS is Celtic’s fifth season in the Europa League group stage. Three of their four previous campaigns have ended in elimination, the exception 2014/15, when they reached the round of 32. They also got to that stage of the competition last season after finishing third in their Champions League group, but lost 3-1 on aggregate to Russians St Petersburg.

* THE Glasgow giants are unbeaten in continental contests at Parkhead in 2018 – winning five and drawing one.

* RB LEIPZIG finished sixth in the 2017/18 Bundesliga to make it two European qualifications in a row, their debut continental campaign having ended in the Europa League quarter-finals – eliminated by Marseille – after they finished third in their Champions League group.

* HAVING defeated Häcken, of Sweden, and Romania’s Universitatea Craiova in the first two qualifying rounds this season, Leipzig needed a last-gasp penalty from Emil Forsberg to win their play-off 3-2 on aggregate against Ukrainian club Zorya Luhansk. 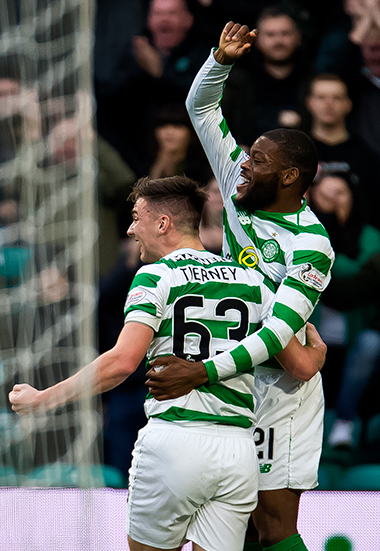 OLIVIER NTCHAM, celebrating with Kieran Tierney, is a French Under-21 colleague of two RB Leipzig stars.

* THE Germans are unbeaten away from home in Europe in this campaign, their 3-1 win at Rosenborg on matchday two following three successive draws in the Europa League qualifying phase. Their away record in two seasons of European competition shows three wins, four draws and three losses.

* MARVIN COMPPER joined Celtic from Leipzig in a £1.3million deal in January 2018, although he has yet to play a full game for the Parkhead side.

* ODSONNE EDOUARD and Dayot Upamecano played together for the France side that won the 2015 European Under-17 Championship in Bulgaria, with the £9million Celtic striker scoring a hat-trick in the Final – a 4-1 victory against Germany.

* OLIVIER NTCHAM is a team-mate of Dayot Upamecano and Jean-Kévin Augustin at Under-21 level for France.