TEN of the Celtic team that won 5-1 at Ibrox on April 29 started this season’s 2-0 victory in Govan in September. The odd man out was Callum McGregor, who came on as a second-half substitute. Tom Rogic, who scored the first goal, took his place in the original line-up along with Craig Gordon, Mikael Lustig, Jozo Simunovic, Dedryck Boyata, Kieran Tierney, Scott Brown, Stuart Armstrong, Patrick Roberts, Scott Sinclair and Leigh Griffiths.

LEIGH GRIFFITHS scored his 67th goal for the Hoops on his 100th appearance at Ibrox in September.

JAMES FORREST, 26, replaced Paddy Roberts to play his 250th game for the Parkhead side. His goal in the 2-0 win over Dundee at the weekend was his 50th for the club after signing youth forms at the age of 13.

EBOUE KOUASSI, Brendan Rodgers’ £2.8million signing from Russian side Krasnodar in January, made unwanted history at Ibrox in April. The Ivorian midfielder came on for skipper Scott Brown in the 89th minute – and didn’t get a touch of the ball. Referee John Beaton allowed only 11 SECONDS of stoppage time before blowing to signal the end of the game. 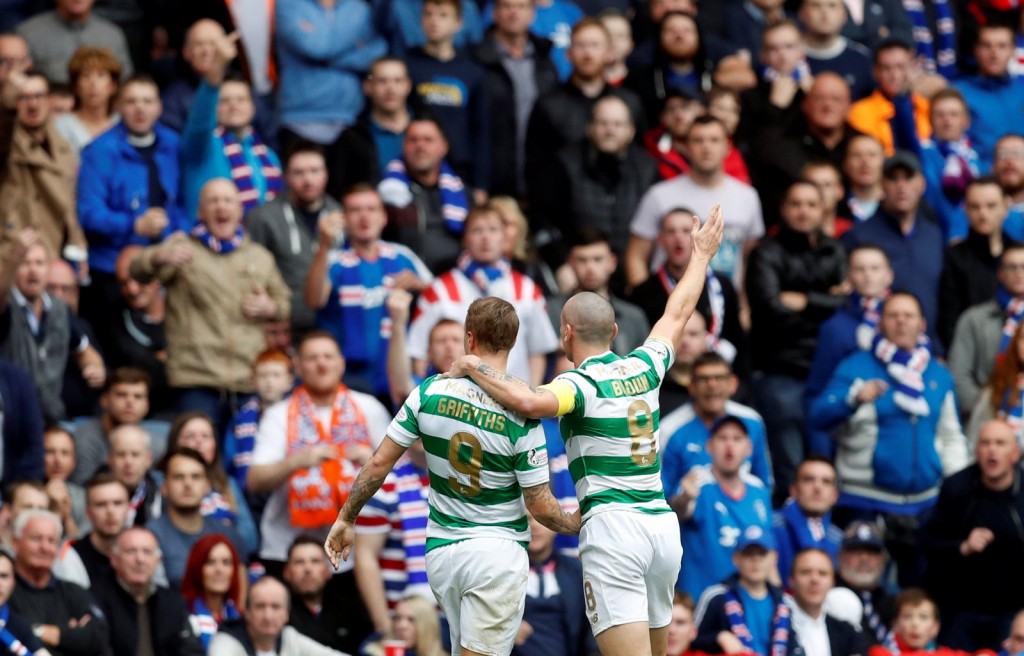 BRENDAN RODGERS has faced Sevco Rangers seven times as Celtic boss and won six and drawn one. The Hoops took 10 points from a possible 12 last season after a 5-1 win and a 1-1 draw at Parkhead and 2-1 and 5-1 victories at Ibrox. A Moussa Dembele goal gave Celtic a 1-0 triumph in the Betfred League Cup semi-final and Callum McGregor and Scott Sinclair (pen) were on target in the 2-0 Scottish Cup semi-final success. Tom Rogic and Leigh Griffiths have added to the sequence with September’s 2-0 win. 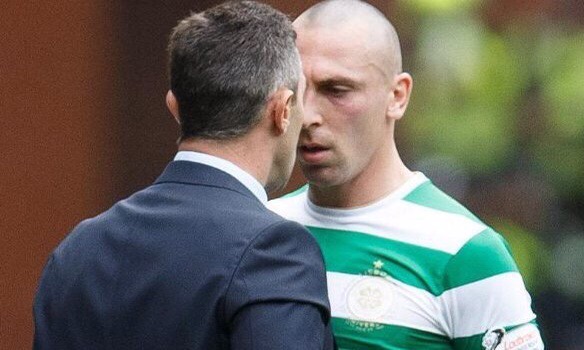 PEDRO CAIXINHA lost all three of his games against the champions. He saw the team go down 2-0 in the Scottish Cup semi-final on April 23 and followed up that defeat six days later with the 5-1 Premiership flop. The Hoops completed the hat-trick with their 2-0 win in September. The Portuguese coach was sacked shortly afterwards.Previous boss Mark Warburton claimed a 2-2 Scottish Cup semi-final draw in April last year before winning a penalty shoot out. That shoot out success is the only ‘win’ that the Ibrox club has ever achieved over Celtic since Charles Green founded the club in 2012. Warburton suffered successive league defeats – 5-1 and 2-1 – before leaving Ibrox in February. Graeme Murty saw his side claim a point in the 1-1 draw last season, thanks mostly to a Bobby Madden ‘honest mistake’ in the final minute when Clint Hill brought down Leigh Griffiths from behind just as the Celtic striker was about to score.