RYAN CHRISTIE has revealed he was tempted to have a shot at goal before he set up Odsonne Edouard for the winner in the dramatic Europa League Group B victory over RB Leipzig at Parkhead last night.

The fans were stunned when the Bundesliga outfit nullified Kieran Tierney’s first-half strike as Jean-Kevin Augustin was allowed a free header from six yards following a right-wing delivery from Konrad Laimer.

However, the Hoops responded in breathtaking quickfire fashion with Scott Sinclair sliding in the midfielder who swiftly cut the ball into the path of the £9million French ace who tucked it behind the keeper.

Christie admitted: “As soon as I took the touch, I could see Odsonne out of the corner of my eye running in, but my first thought was ‘just shoot’.

“And then I thought that maybe I had better not. It goes through your mind in such a flash, but I could see he was in the better position and I was delighted to see him tap it in.

“I thought he was tremendous for us. You need players like that when you are under pressure at times and the ball is being hit up to him. He held it up so well, got us a few free-kicks and just really did a big job for the team, so I was really pleased for him when he scored.

“It was definitely the most enjoyable game I’ve ever played in.

“It was just a brilliant night and it opens the Europa League group up for us now.”

Christie said: “With 10 minutes to go and having to hold on, I could really felt the spirit within the team. 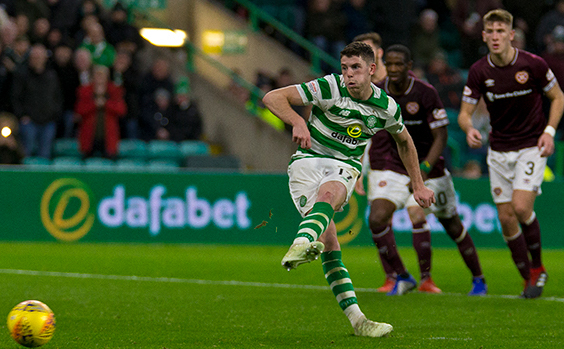 SPOT ON…Ryan Christie slots in a penalty-kick for the fifth goal against Hearts at the weekend.

“We were having to hold on, but I just felt the confidence of the players round about me on the pitch. We were looking at each other and thinking that we had it in us to dig our heels in and get the result. We did that and I think we deserved it, too.

“We knew before the game that we had to win and we have done that. Who knows now what we can do? There are two games to go and we have put ourselves back in the mix.”

Twenty-three-year-old Christie, who is out of contract in the summer and is hoping to seal an extension in the coming weeks, will now turn his attention back to the Premiership and added: “We are at Livingston now on Sunday afternoon and it would be fabulous to round off the month by looking at the table and seeing ourselves sitting at the top of it.

“That is no disrespect at all to Livingston because they have had a brilliant start to the season and have shown a lot of people what they have got, but we want to keep this run of form going.

“It will be tough for us because they have been excellent at home. However, we will rest up now and recover over the next few days because we know that it is a gruelling schedule.

“We’ll be ready to go again and everyone will have taken a massive lift from the result and the performance last night.”

Christie has scored in the last three domestic games against Hearts (twice) and Dundee and will hope to keep the streak going in the High Noon shoot-out with Gary Holt’s side.