SAM COSGROVE has lost his appeal against the red card he received for a lunge at Kristoffer Ajer in Aberdeen’s 2-1 loss against Celtic at the weekend.

The Dons striker will now miss the Boxing Day match against Livingston and Sunday’s trip to face Hearts at Tynecastle.

The 20-goal forward, who scored his 20th goal of the season in the loss at Parkhead, was dismissed by referee Euan Anderson for a wayward challenge on the Hoops’ Norwegian defender shortly after Odsonne Edouard had scored the eventual winner.

Pittodie boss Derek McInnes described it as a “brilliant tackle” after the towering frontman sprinted in and won the ball before clipping Ajer with his trailing leg.

He also claimed Neil Lennon had agreed with him immediately after the game, but the Hoops gaffer had a change of opinion after watching the footage back. 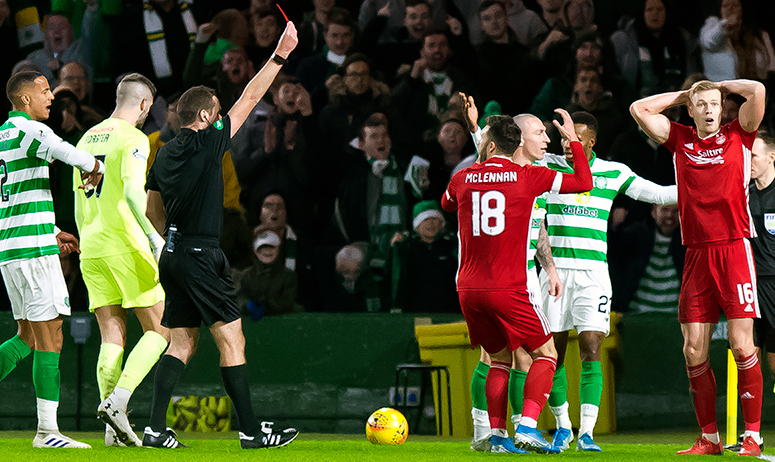 Speaking BEFORE the SFA appeal hearing last night, Lennon, speaking to Sky Sports News, said: “He did get a lot of the ball, but there was intent there.

“I didn’t think he needed to make the challenge in that area and the way he did it.

“Ten years ago I would have been happy with a challenge like that, but with the game as it is now, on the follow-through it maybe could have hurt Kristoffer and he is maybe lucky that he didn’t come off with a bad injury or an injury of some sort.

“Looking at it at the time, it was a full-blooded challenge, but when you see it again I am thinking: ‘Why are you making a challenge like that? You are setting yourself up for trouble’.

“So, the way the game is, it was probably the correct decision.

“You always worry when a player has left the ground that the excessive force could be dangerous.”

Lennon is now preparing his players for the trip to Pailsey for tomorrow’s Boxing Day clash against St Mirren and the visit of Steven Gerrard’s Ibrox outfit on Sunday before the curtain falls on 2019 and the mid-winter break kicks in.