CHRISTOPHER JULLIEN has reassured Celtic fans he’s “all good” after giving the team a scare as he limped off near the end of the 3-1 win over Kilmarnok at Parkhead yesterday.

The £7million French centre-half, who has been in excellent form in recent games, had to be replaced by Tom Rogic five minutes from the end.

Boss Neil Lennon issued an update after the full-time whistle and played down fears his summer signing from Toulouse would be sidelined for a prolonged period.

The Irishman admitted the towering defender had an issue with his hamstring, but reckoned he would be fine.

Jullien took to social media to inform Hoops supporters there is nothing to worry about, saying: “Hi, Paradise. I’m all good, just had to be careful on this one. I hear your good vibes on the park. 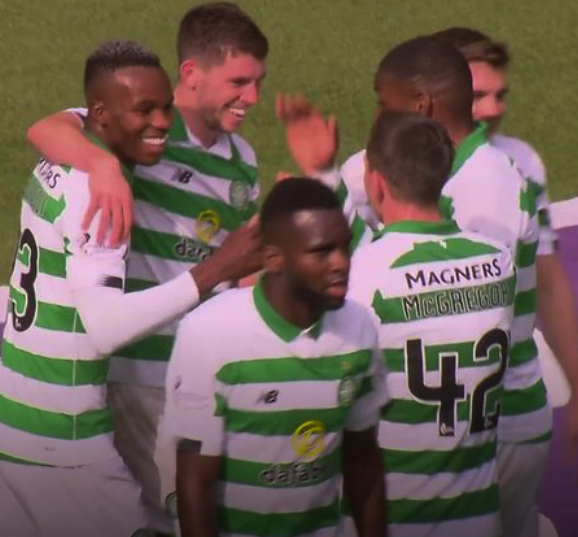 THREE’N’EASY…Ryan Christie is congratulated by Celtic tam-mates after netting the third goal.

Jullien earned plaudits for his rock-solid performance in the 2-0 win at Ibrox at the start of the month and followed that up with a flawless display in the 1-1 draw with Rennes in the opening encounter of the Europa League group on Thursday night.

Killie stunned Jullien and Co when they took the lead through a swift counter-attack that saw Emaonn Brophy loop a shot over Fraser Forster, but Odsonne Edouard netted twice on either side of half-time and Ryan Christie made certain with the third.

The former Toulouse star should be in place when managerless Partick Thistle, who sacked ex-Celt Gary Caldwell last week, visit in the League Cup quarter-final on Wednesday evening.