JAMES FORREST admitted he was “a bit gutted” he was not Head Bhoy at parkhead yesterday.

The winger was virtually unstoppable as he tore the Kilmarnock rearguard apart time and again during the champions’ 3-1 triumph.

However, Forrest was denied on three occasions by amazing saves from Romanian keeper Laurentiu Branescu while thumping two efforts off the woodwork.

But it was the Scotland international’s fierce header that was parried by the Killie No.1 that led to Ryan Christie snapping up the rebound for the third strike that irked the attacker.

He felt cheated in the battle of the siblings with brother Alan nodding in one for Ayr United in their 4-1 win over Alloa at the weekend.

Forrest was unhappy at being denied and, speaking to the Daily Record, said: “That was just because I don’t score many headers!

“I’ve only ever scored one, at Kilmarnock, but that was only from about two yards out.

“My wee brother scored a header on Saturday as well so I was desperate for that one to go in.

“We’re not in competition or anything, it was just because he scored a header and we don’t score many headers between us. The boys told me afterwards it was a brilliant save from the keeper, but I think they were just trying to make me feel better! 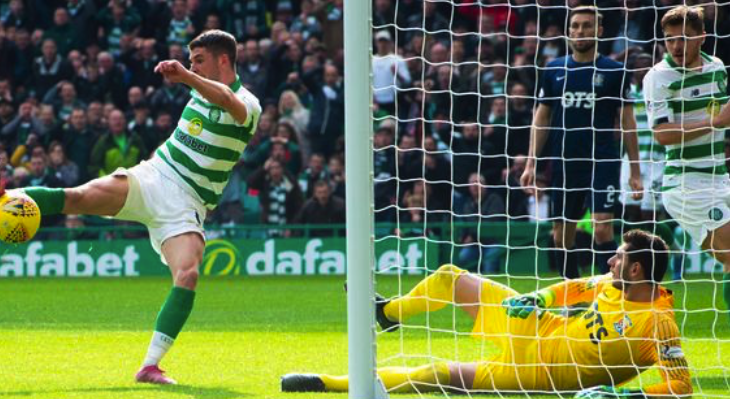 ONLOOKER…James Forrest can only watch as Ryan Christie hooks in the third goal.

“I must admit I was a bit gutted. I’m obviously delighted we scored the third goal though, because it gave us that wee cushion in the game.

“It came quite soon after the second goal, as well.”

The Hoops were rocked when Eamonn Brophy put the visitors ahead, but Forrest raced down the left wing before pitching in a perfect cross for Odsonne Edouard to score with a header for the leveller just before the interval.

The Frenchman repeated the feat shortly after the turnaround before Christie netted from two yards for his 10th strike of a prolific campaign.

Forrest reckoned he could have played until midnight and not scored a goal.

He added: “That’s exactly what it felt like. Their goalie was right up for it right from the start and he make a good few saves. He made us work for the goals, but it’s always tough against Kilmarnock, home or away.

“We played really well and the boys enjoyed it.

“We were happy with it. The manager told us we would need to be at it right from the start and we managed to keep it going.

“We scored three, but we could have had a lot more. I know I could have.

“There are some games in the season when you might get one chance and you score. Then there are ones like this where I had four or five chances, but it just didn’t happen.

“But it shows you are playing well and with confidence when you are getting plenty of chances.

“If you keep doing the right things, then the goals will come.

“We could have scored more and, while I’m obviously gutted not to get on the scoresheet, all the boys were buzzing with the three points and with the way we played.”