COMEBACK keeper Fraser Forster thanked his Celtic team-mates for making it so easy for him in his first Glasgow derby in seven years.

And the skyscraper shotstopper, who was asked to make only one save in the 2-0 win at Ibrox on Sunday, singled out £7million French defender Christopher Jullien for special praise.

Forster, speaking to the Evening Times, said: “It was my first clean sheet second time around and probably a pretty good place to keep it.

“It was a fantastic result. All the lads can be proud of their performance.

“Did I expect it to be so quiet? Maybe not. It was a credit to the back four. At the end of the game, we were playing with four Old Firm debutants. They were fantastic. 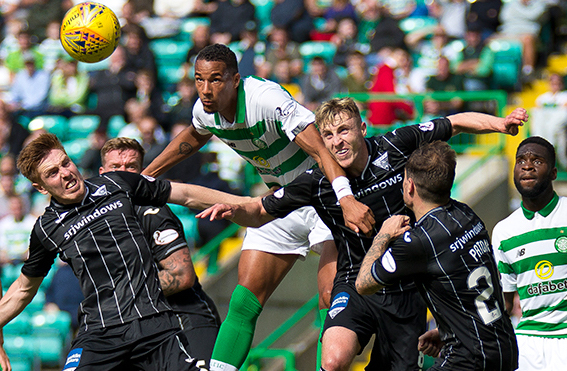 TOWER OF STRENGTH…Christopher Jullien displays his prowess in the air.

“He is a big guy. I think he headed everything and looked really good. I thought he was brilliant. The whole team did well.

“Everyone did their jobs. You can make it as hard as you want or as easy as you want and we were right at it. We did really well.”

As well as his applause for the back lot that consisted of Hatem Abd Elhamed, Nir Bitton and Boli Bolingoli as well as Jullien and Mortiz Bauer when he made his 66th-minute appearance, Forster admitted he was looking forward to seeing striker Mohamed Elyounoussi in action for the Hoops.

The Moroccan-born Danish international followed the goalie on a season-long loan from Southampton during the summer transfer window and the England international is certain he will succeed at the champions.

He added: “It’s a fantastic signing. He has been unfortunate probably in the last year, but he has done well at the clubs he has had previously.

“So, hopefully, he can settle in quickly and hit the ground running.”

Elyounoussi has made the most of the international break to work on his match fitness and could make Neil Lennon’s squad for the Premiership encounter at Hamilton a week tomorrow.