JEREMIE FRIMPONG has taken the eye and captured the imagination of the Celtic fans with his exhilarating attacking qualities since his first-team breakthrough.

Supporters have praised the adventurous spirit of the 18-year-old Amsterdam-born right-back who arrived at the champions on deadline day from Manchester City and agreed a deal that will keep him at the club until June 2023 at least.

Livingston were the latest victims to be shredded down their left side in Neil Lennon’s side’s 4-0 triumph in Glasgow at the weekend.

It’s worth noting that Frimpong has yet to appear in a Premiership game where Fraser Forster has been required to pick the ball from the back of the net.

The thrilling Dutch teenager has played four league games and the defence have kept clean sheets on all of the occasions – 6-0 against Ross County, 4-0 v Aberdeen – where Frimpong scored his first Celtic goal – 2-0 over Motherwell and Saturday’s romp against Gary Holt’s West Lothian outfit. 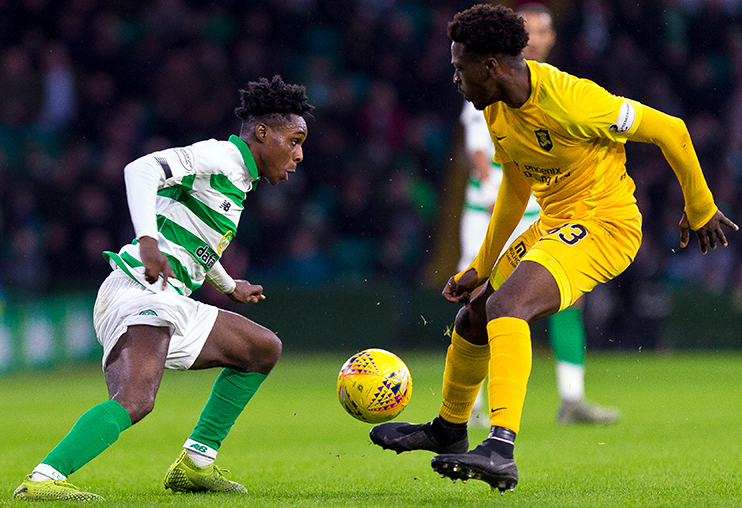 ON THE ATTACK…Jeremie Frimpong puts the pressure on the Livingston rearguard.

The No.2 made his first appearance in another shut-out when the holders overcame Partick Thistle 5-0 in the Betfred League Cup quarter-final at Parkhead on September 25 and only Hibs have made a dent when Frimprong has been patrolling the right side. The Edinburgh side scored twice their 5-2 loss in the semi-final of the competition earlier this month.

Kristoffer Ajer has had a close-up view of his new team-mate and, speaking to the Daily Record, he said: “Jeremie has been fantastic since he came in the summer.

“Since the first training session he has proven himself as a top talent.

“The way he is training and working every day is to get better and better and you can see it in the games.

“When you are young and go into a dressing room, you have to work your way into it, but he has been incredible.

“You can see with the way he is playing consistently that it’s not just a one-off.

“It’s there every single time and that’s just incredible.”

Frimpong could get an early reward with the opportunity to play against Steven Gerrard’s Ibrox side in the Betfred League Cup Final at Hampden a week on Sunday.