YOSUKE IDEGUCHI is determined not to become the ‘forgotten’ J-League recruit at Celtic.

The 25-year-old midfielder admitted he has endured a frustrating first few months at Parkhead after joining alongside Rep Hatate and Daizen Maeda on Hogmanay.

The trio caught up with striker Kyogo Furuhashi who had already joined in a £4.6million switch from Vissel Kobe in July.

The three new Bhoys all figured in the 2-0 win over Hibs at Parkhead on January 17 where Maeda scored the opener in four minutes and Hatate was named Man of the Match. Ideguchi played himself quietly as a 74th-minute substitute for his countryman Hatate.

The international anchorman, who had a year-long spell at Leeds United in 2018-19, had to be helped from the pitch five days later after a shocking over-the-top assault by Alloa’s Mohammed Diang in the 68th minute in the Hoops’ 2-1 Scottish Cup win.

Blundering referee Don Robertson merely booked the culprit, but he was later banned for two games when the dreadful challenge was reviewed by the SFA panel.

Ideguchi, though, was forced onto the sidelines and made only six appearances for the team as his colleagues swept to the club’s tenth title success in 11 years. 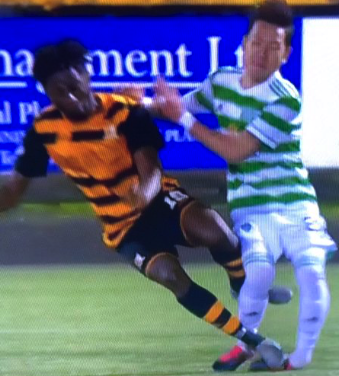 OUCH…Yosuke Ideguchi winces at the shocking challenge from Alloa’s Muhammed Diang in his second appearance on January 22.

Now, though, the former Gamba Osaka star is ready to play his part on the domestic and European fronts.

Ideguchi, speaking to Japanese media Number Web, said: “This is my second attempt in Europe.

“I think it’s great that Reo Hatate got in the team first, but, of course, it’s frustrating not to play.

“In order to secure a permanent position here, I have to show my play and features more fully.”

Ange Postecoglou is keen to utilise the player’s qualities and a place in the defensive midfield position has opened up with the exit of Israel international Nir Bitton last month.