ONE touch to control the ball to set up the opportunity and one blinding flash from his left foot dispatched the blurring sphere with breathtaking accuracy into the far corner of the net.

And lethal Leigh Griffiths was back in the business of plundering Premiership strikes.

The comeback attacker, claiming his first league goal in almost nine months, was in seventh heaven as he buried a trademark effort beyond the sprawling Zander Clark to complete the scoring in Celtic’s rampant 7-0 triumph over devastated St Johnstone as the champions celebrated their eighth successive Flag Day in flamboyant and ruthless style. 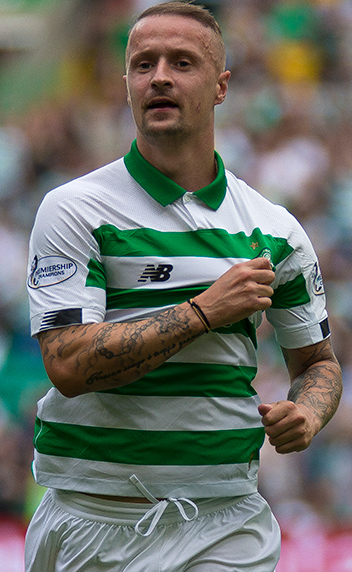 BACK IN THE OLD ROUTINE…Leigh Griffiths  after scoring the seventh goal.

Neil Lennon’s men added the killer touch to the cavalier performance as Ryan Christie thumped in an exquisite hat-trick and Mickey Johnston, Olivier Ntcham and Odsonne Edouard, as well as Griffiths, added gloss to the emphatic scoreline during a soccer carnival in the east end of Glasgow.

After a solitary outing, the Hoops find themselves where they left off last season – at the pinnacle off the top flight with nine in a row on the radar.

The snipers have had a field day in insisting Scotland’s dominant force will not go one over the eight and newcomer Sheyl Ojo, who has played precisely 78 minutes of league football in this country, has already offered his considered opinion that Steven Gerrard has assembled the best team in the land.

Griffiths, naturally, is not one bit interested in the mouth music that is emanating from other parts of the nation and beyond.

The Scotland international frontman, speaking to the Daily Record, said: “We let other people talk and say what they have to say.

“As players, we do our job on that pitch and you look at the performance against St Johnstone.

“If people think we are weaker when we are winning 7-0, how much better can we get?

“We look strong. We were missing Christopher Jullien, Jozo Simunovic and Kieran Tierney on Saturday. 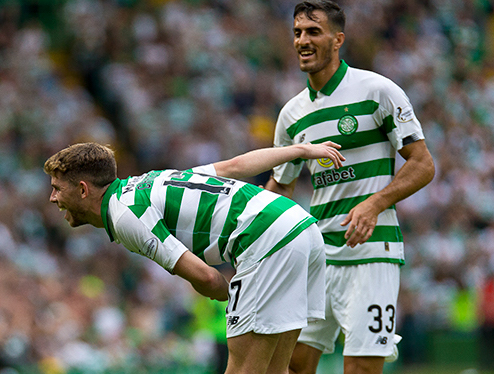 TAKE A BOW…hat-trick hero Ryan Christie is about to be congratulated by new Bhoy Hatem Abd Elhamed after netting one of his three goals.

“You also have the attacking players who weren’t in the squad, Tom Rogic, Marian Shved and Vakoun Issouf Bayo.

“There are a lot of players who will come back and make us even stronger and it’s up to the gaffer how he uses us – but that was a great start to the league season.

“Last season was a bit disruptive with Brendan Rodgers leaving and the gaffer coming in, but we still won games.

“We got the late wins a few times last season and that’s the mark of this team. We always go right to the very end and you even saw that on Saturday when we wanted more than seven.

“We know we won’t win 7-0 every week but if we perform to that level we should win more than we lose.”