NEIL LENNON watched Celtic lose 3-2 to their Ibrox counterparts in the Youth Cup Final at Hampden this evening.

The youngsters gifted three goals to the opposition from set-pieces as they lost to their Glasgow rivals in the final of the tournament for the first time since 2008.

The Hoops thought they had scored a dramatic late equaliser when the impressive Cameron Harper thumped in a header from a right-wing cross, but the assistant ref flagged for the ball being over the line before the cross came in.

It was an interesting and entertaining spectacle and Lennon’s assistant John Kennedy and club stalwarts Davie Hay and Danny McGrain also watched the action.

There was a lot of attention on Karamoko Dembele and ex-Arsenal starlet Armstrong Oko-Flex and both showed neat and encouraging touches throughout. 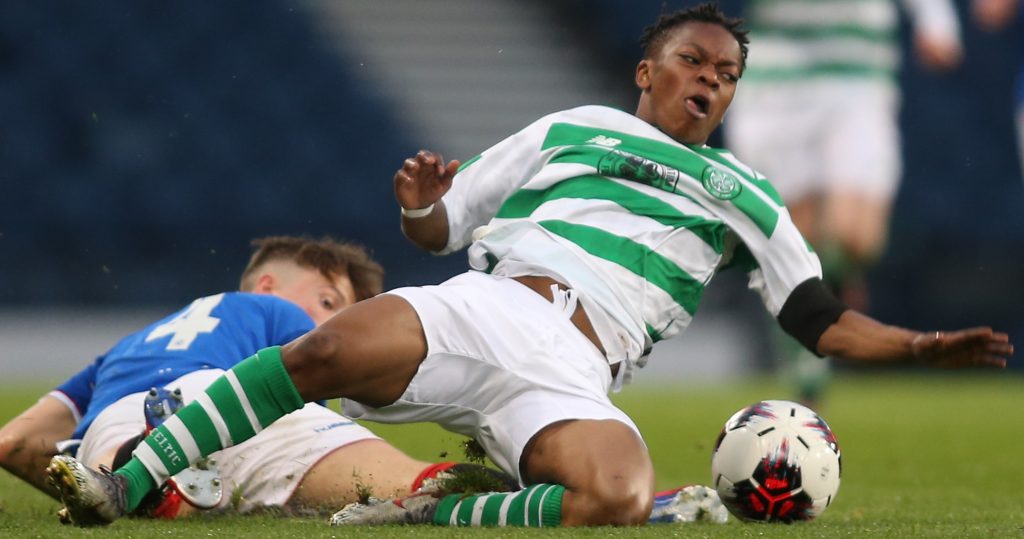 CRASH-LANDING…Karamoko Dembele hits the ground after a wayward tackle.

However, the youngsters surrendered twice in the opening six minutes from deadball situations and their opponents were delighted to take advantage with Kieran Dickson slamming in a low 20-yarder following a right-wing corner-kick and Adedapo Medube hitting the second after a free-kick from the other flank created mayhem.

Stephen McManus’ words at half-time seemed to have the desired effect when his side pulled it back to 2-2 inside three minutes of the second-half.

In the 47th minute, Dembele skipped past two defenders to set up Harper and the gifted attacker curled an unstoppable left-foot effort wide of the keeper.

And it was all-square moments later when a free-kick from Paul Kennedy took a wicked deflection on its way past Lewis Budanaickas.

It looked as though the Celtic colts were in control until some dreadful defence work in the 66th minute allowed Nathan Young-Coombes a free header six yards out from a left-wing corner and he zipped a header past the helpless Liam Hughes.

The keeper threw his side a lifeline three minutes later when he made a fine diving save to his right from a Kai Kennedy penalty-kick, but once Harper’s effort had been disallowed the trophy was heading towards Govan.

Lennon would undoubtedly have seen a lot to note, especially the play of Harper up front who looks a genuine prospect.