CELTIC’S lead at the top of the Premiership has been cut to three points, at least momentarily.

Motherwell lost 3-1 at Fir Park in their High Noon showdown with an Ibrox side who played for just over an hour with 10 men following a red card for Leon Balogun after an over-the-top challenge on Dean Cornelius.

Despite having the advantage of an extra player, woeful Well did not get a solitary effort on target in the entire second-half.

The visitors were literally given a helping hand when they took the lead in the 12th minute when blundering Liam Kelly made a mess of a Connor Goldson header across goal from the right after a left-wing delivery from James Tavernier. 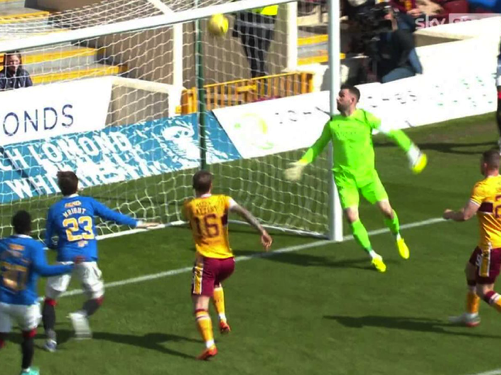 OH GEE…blundering Motherwell keeper Liam Kelly juggles the ball towards his own net with Scott Wright (No.23) following up.

The netminder failed to take the ball cleanly and only managed to parry it towards his own net. Scott Wright chased it over the line, but it looked like an own goal from the keeper.

Balogun then saw a straight red for a shocking tackle on Cornelius that left refree Nick Walsh no option but to dismiss him.

Well equalised with a header from Ross Tierney before half-time, but Graham Alexander’s inept side, who have won only one game in 2022, just could not take control of the contest and Wright shot through Jake Carroll’s legs and low past Kelly to restore his team’s lead shortly after the turnaround.

The expected fightback from the hosts did not materialise and Tavernier hammered home yet another penalty-kick award to seal the points.

The Hoops, of course, can restore their lead to six points when they play Ross County in Dingwall tomorrow afternoon in their quest for their tenth title in 11 years.