CELTIC dazzled in the drizzle at Hampden yesterday as they claimed the Betfred League Cup with a dramatic 1-0 win over Aberdeen.

Ryan Christie was the goal hero with a superb left-foot effort deep in first-half stoppage time.

It was party time again for the Hoops at the final whistle as they celebrated their seventh piece of silverware during Brendan Rodgers’ reign.

CQN‘s ace lensman Geo was there to capture the action. Here is the pick of the pics.

HERE WE GO…Celtic and Aberdeen players take the field at Hampden with the Betfred League Cup the prize for the winners. 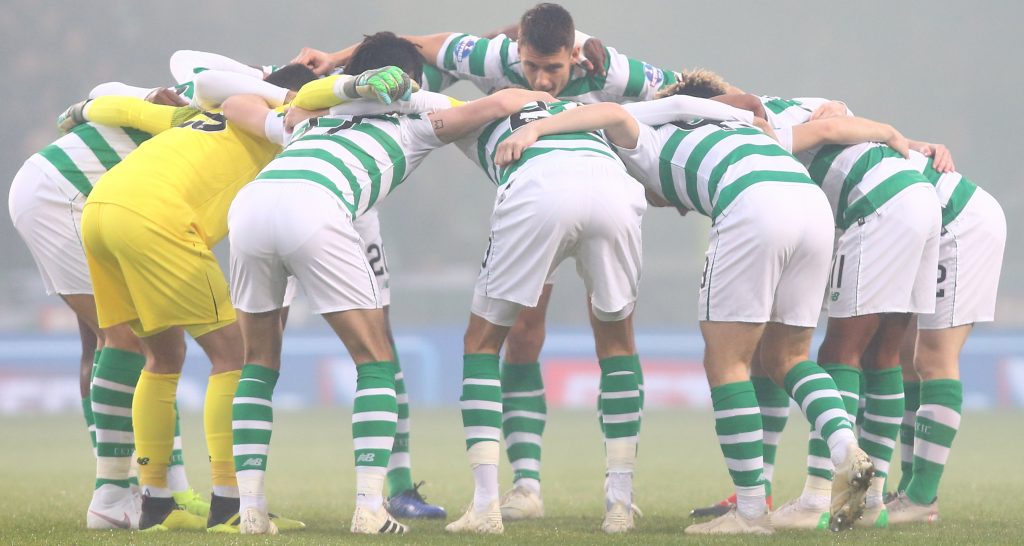 HAMPDEN HUDDLE…the last word before the game gets underway. 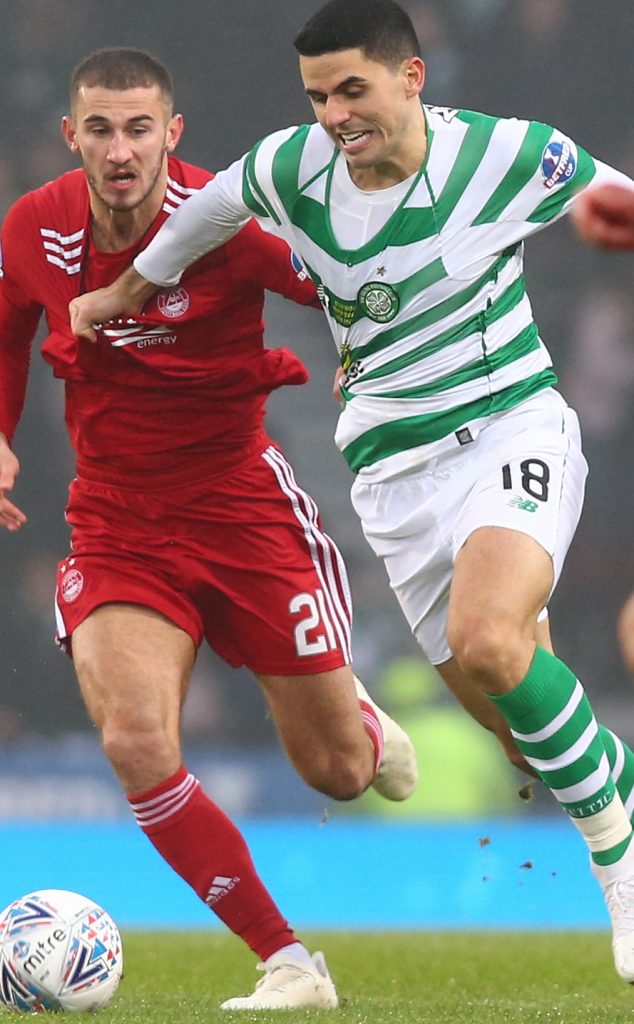 PULLING POWER…Tom Rogic and Dominic Ball get to grips as they tussle for the ball. 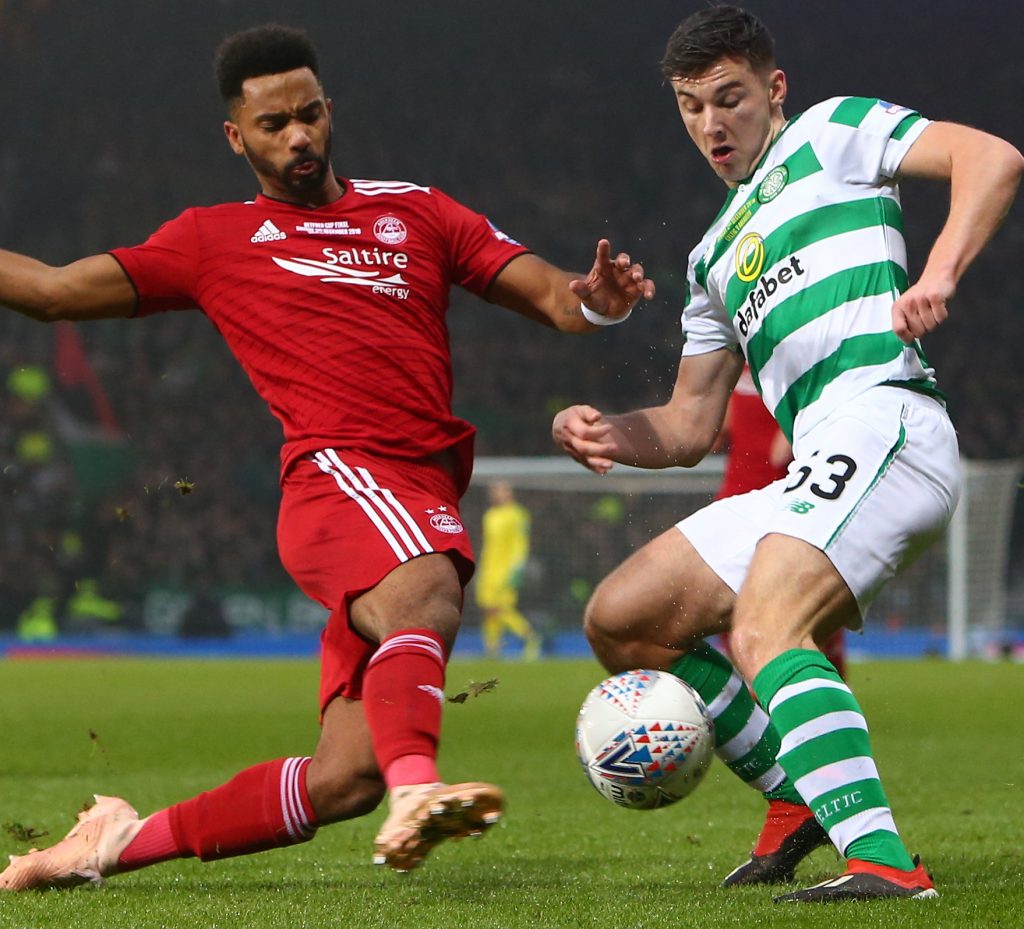 BALL BHOY…Kieran Tierney prepares to turn inside the challenge of Shay Logan. 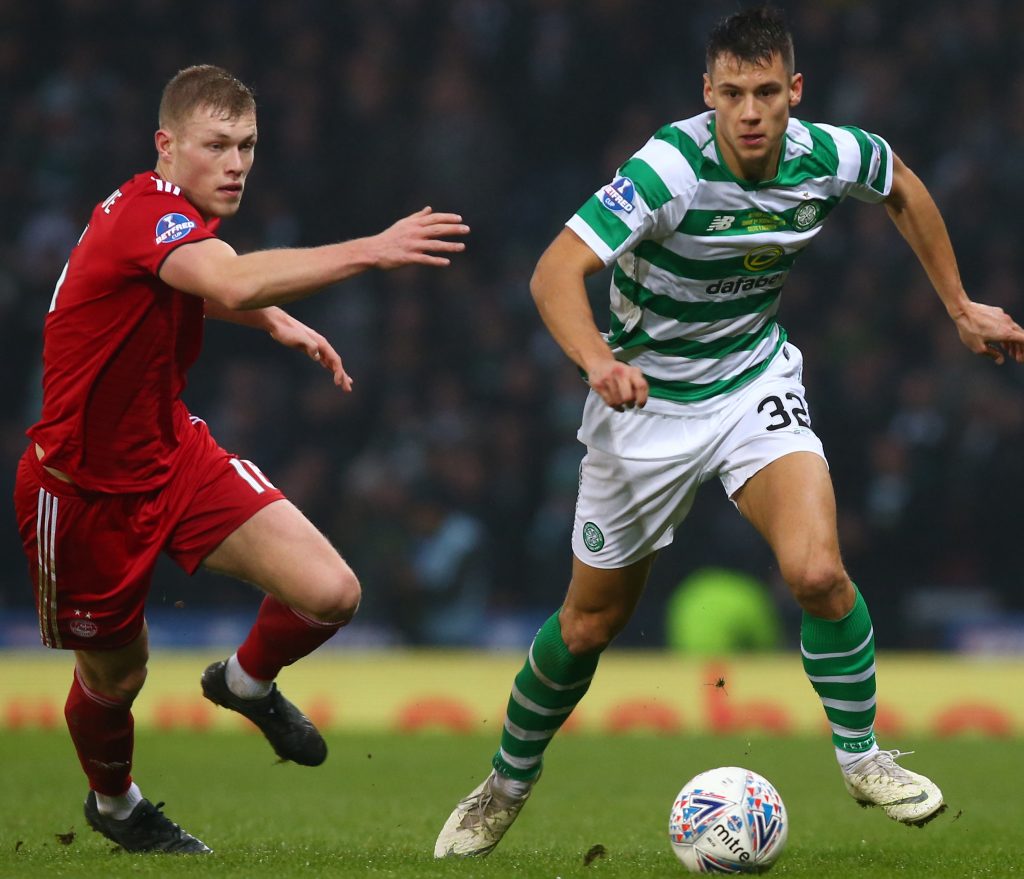 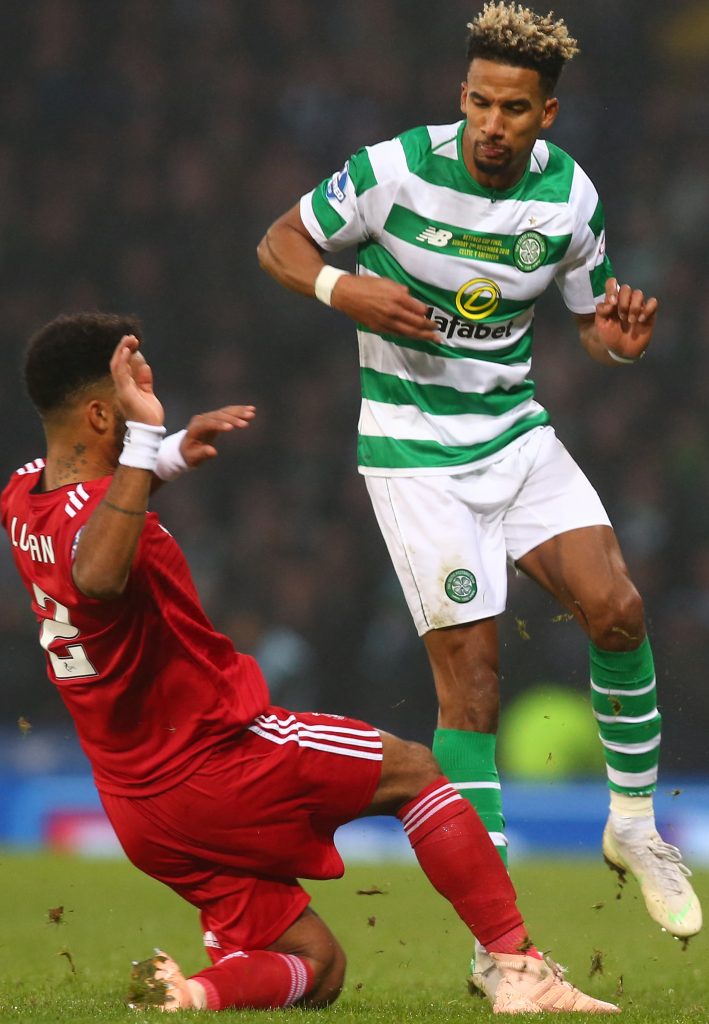 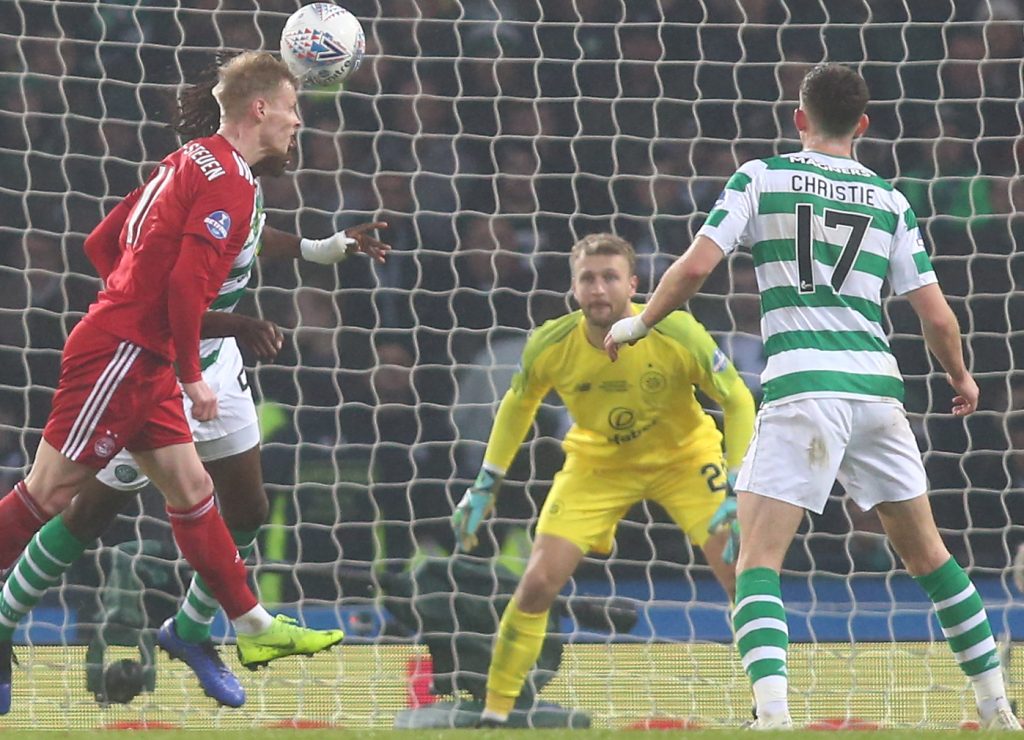 CLASH…Gary Mackay-Steven and Dedryck Boyata in a mid-air collision as keeper Scott Bain and matchwinner Ryan Christie look on. 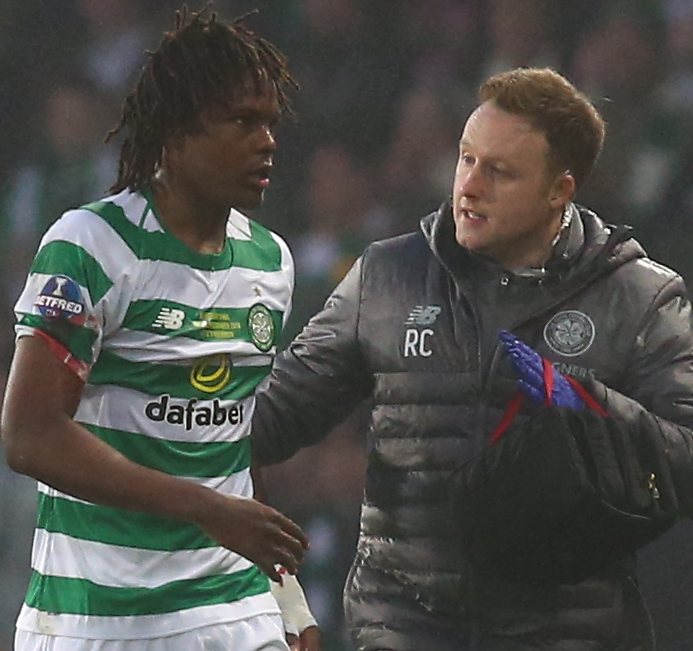 DAZED AND BLOODIED…Dedryck Boyata is helped off the field by a Celtic medic. 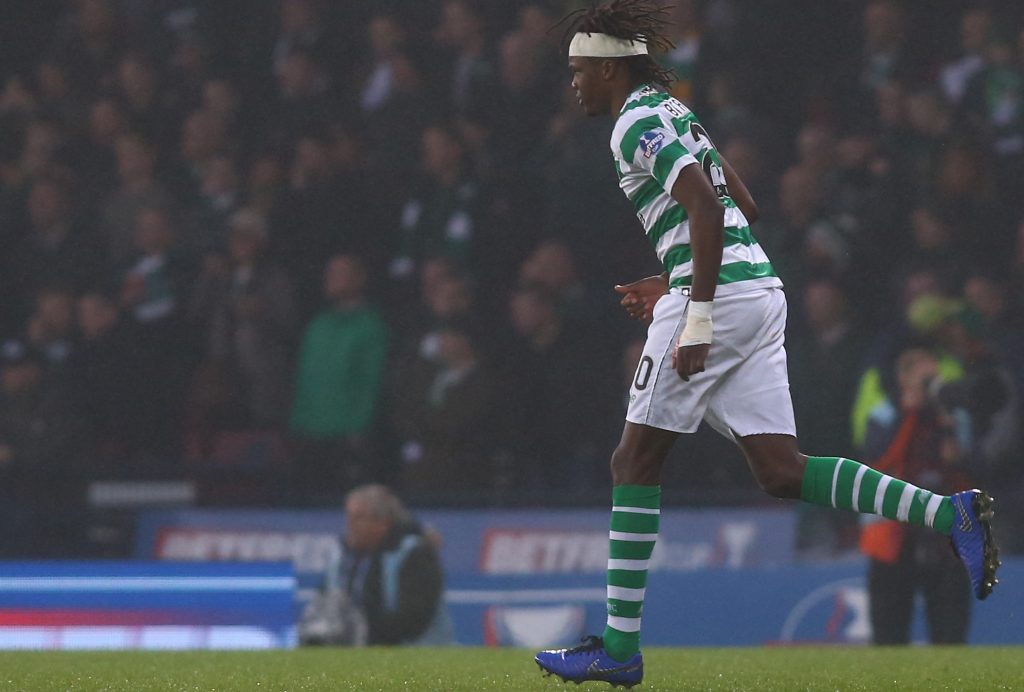 BACK INTO THE FRAY…a bandaged Dedryck Boyata races onto the field after receiving treatment. 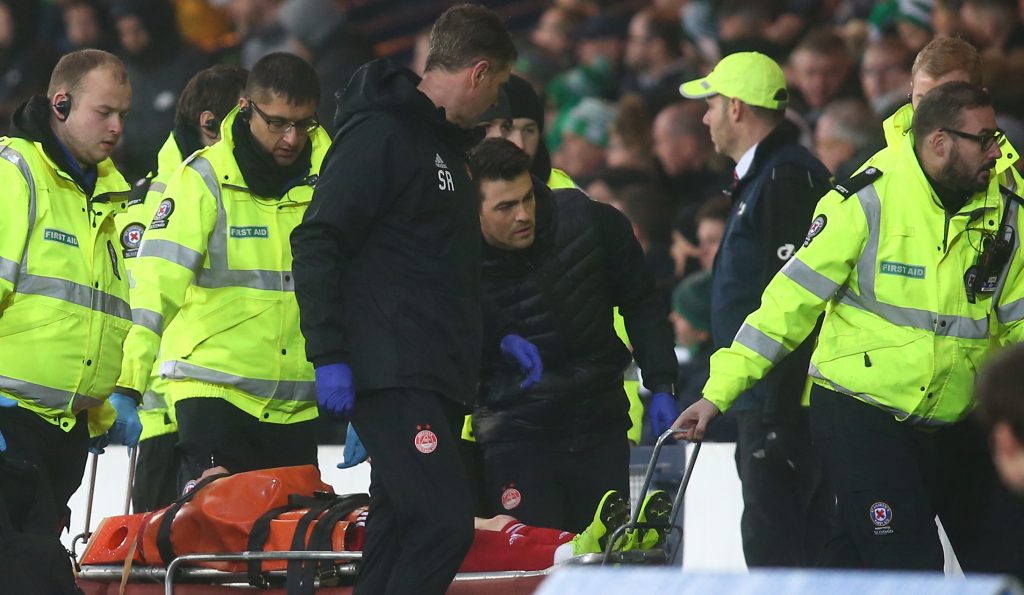 SAD END…a concussed Gary Mackay-Steven is stretchered off. Thankfully, he recovered from the head knock later on.

THE WINNER…Ryan Christie blasts a left-foot drive high past the helpless Joe Lewis as Shay Logan slides in too late.

TRIUMPH AND TEARS…Ryan Christie turns away as Scott Sinclair prepares for the celebration. Dons trio Joe Lewis, Shay Logan and Graeme Shinnie are in despair. 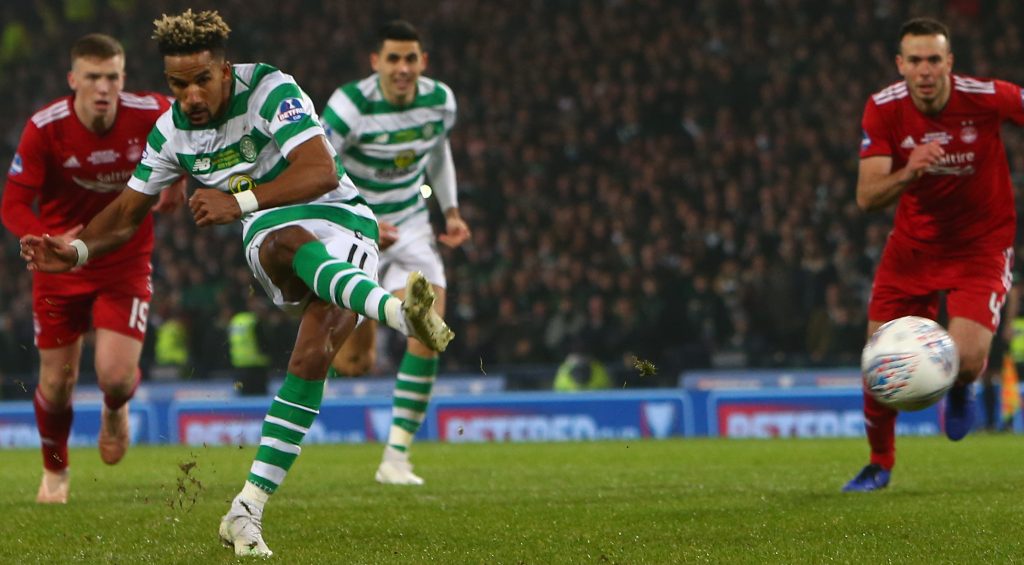 OOPS…Scott Sinclair fires in his penalty-kick, but Joe Lewis pulled off a spectacular diving save. 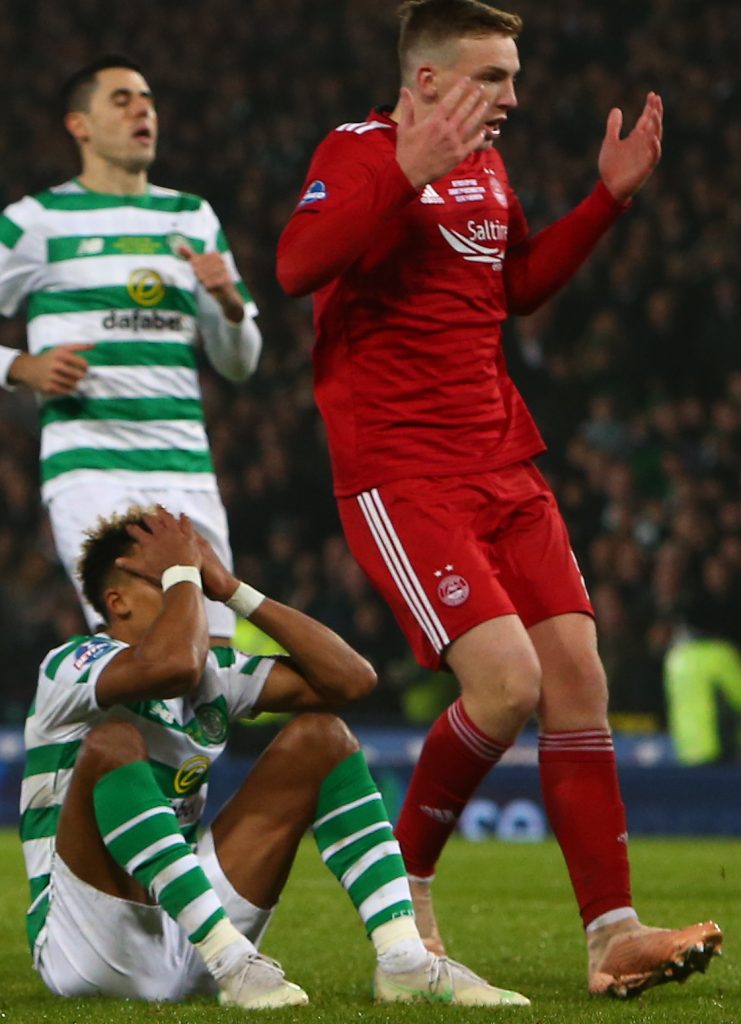 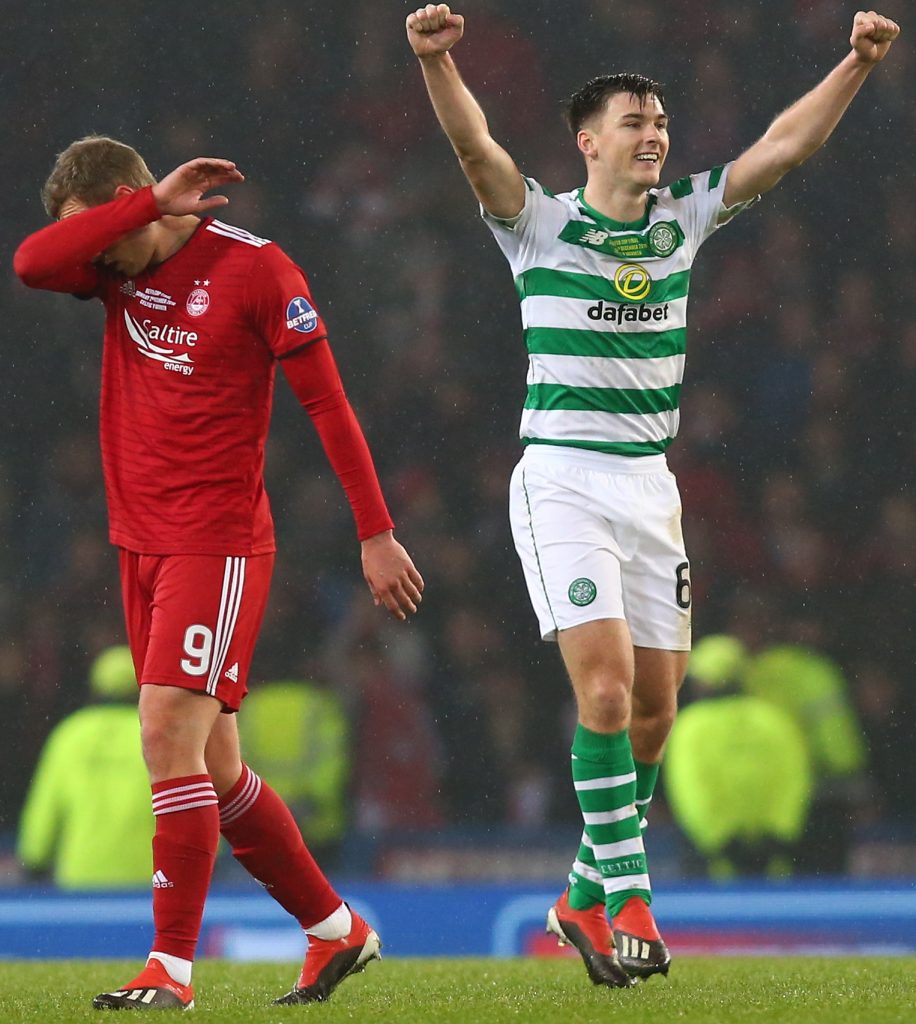 THE FINAL WHISTLE…Kieran Tierney shows his delight at the end of a hard-fought encounter – and Celtic’s seventh successive trophy in Brendan Rodgers’ reign. 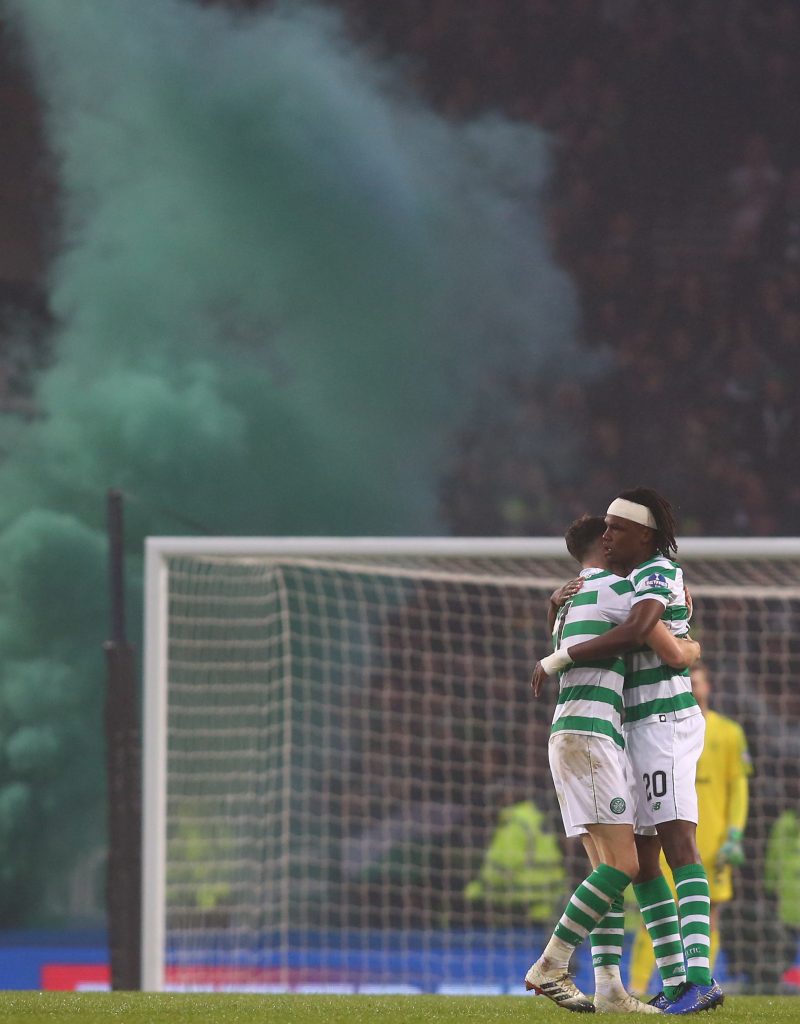 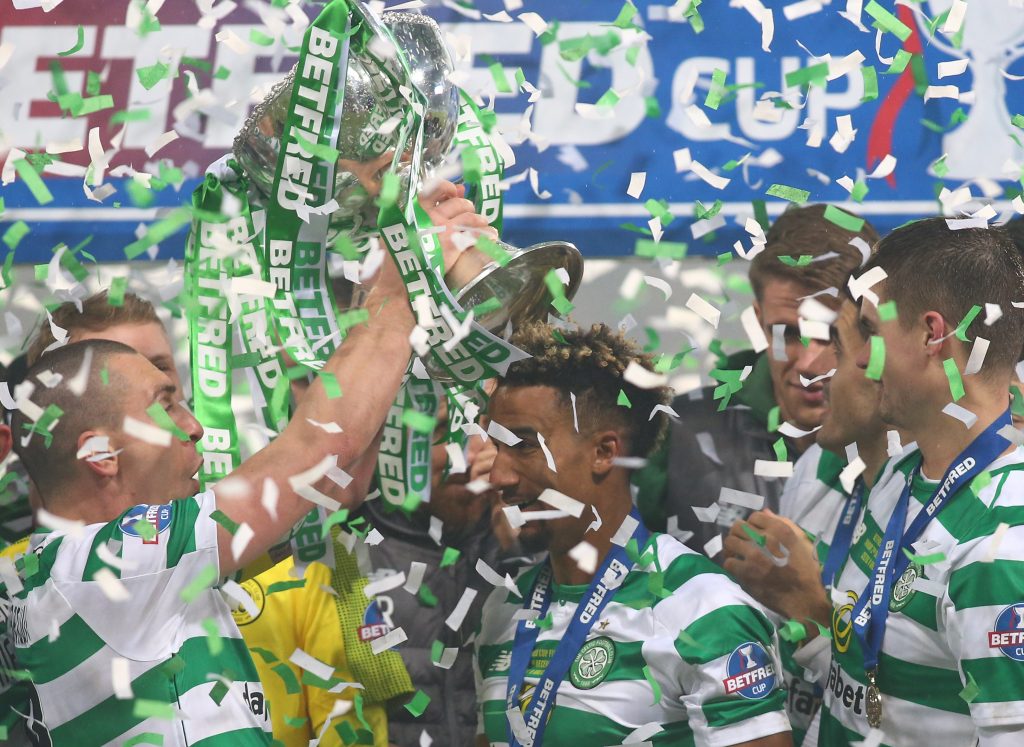 CEL-TICKER TAPE…Scott Brown holds the trophy as his team-mates are engulfed. 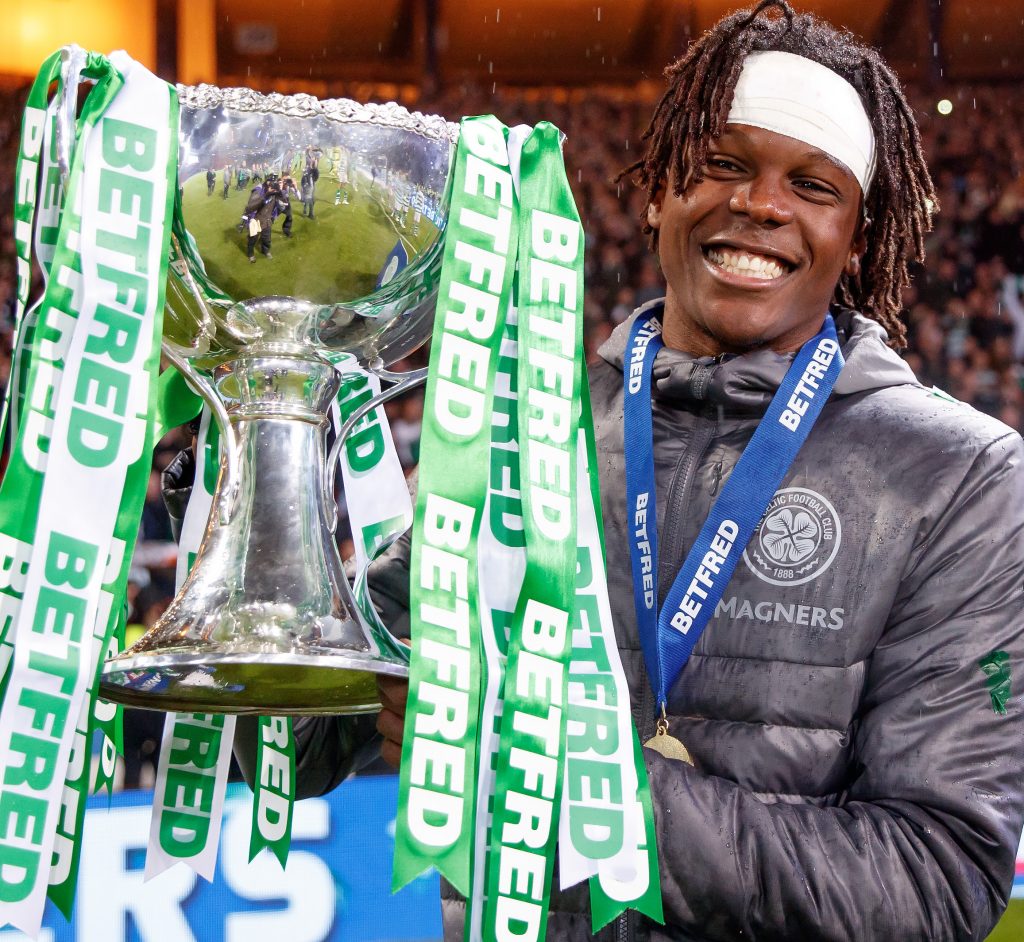 WOUNDED WARRIOR…Dedryck Boyata is all smiles as he poses with the silverware. 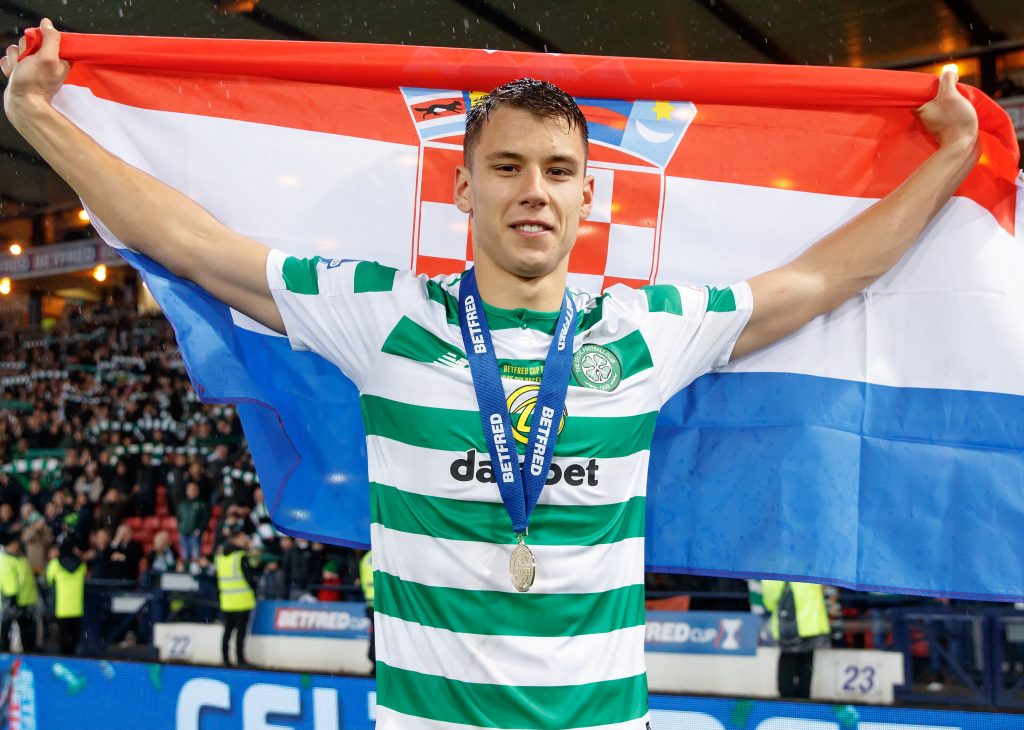 FLYING THE FLAG…Croatian Under-21 international Filip Benkovic shows his colours. 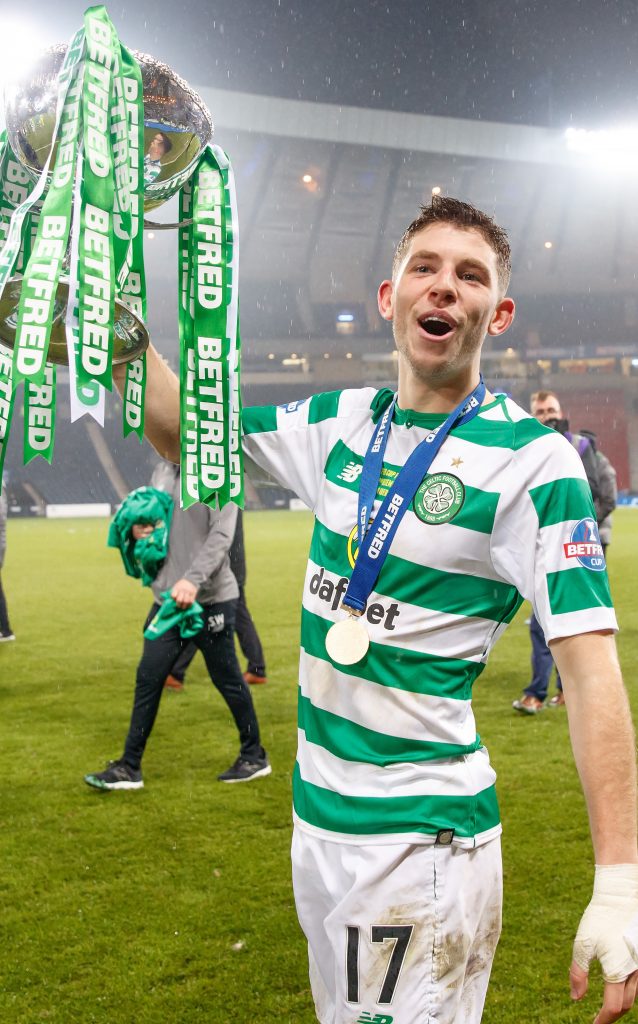 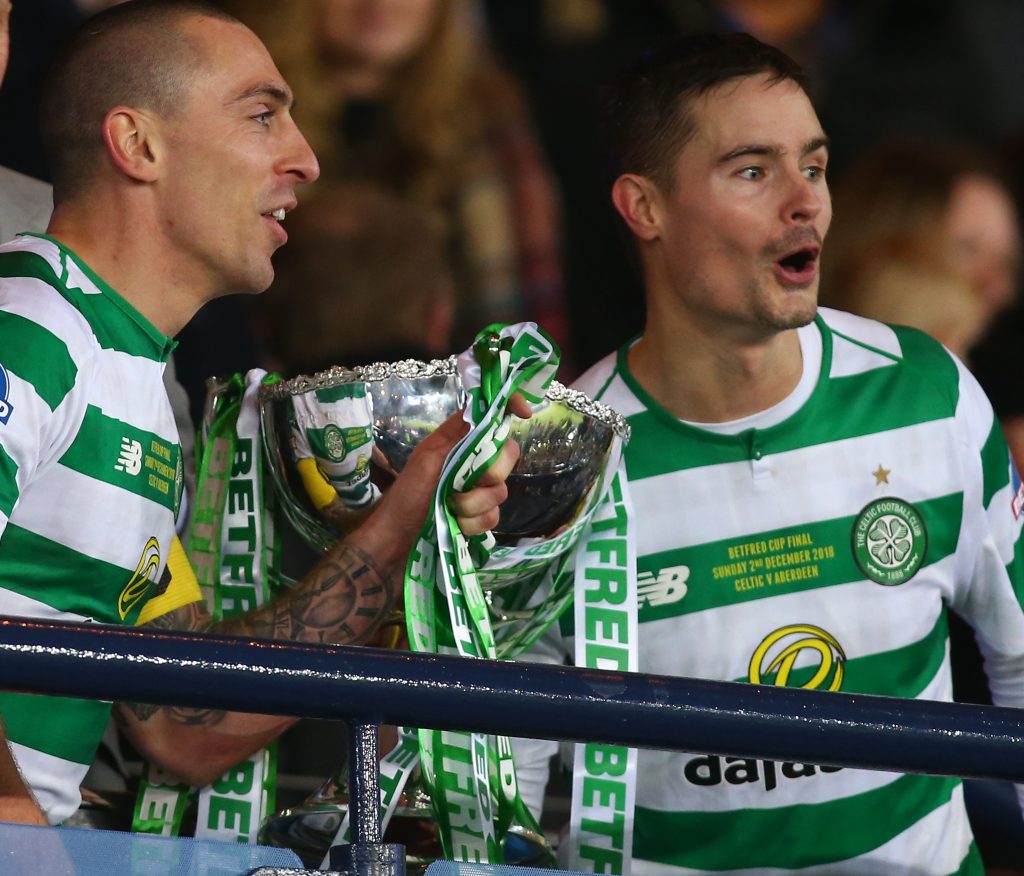 TWO GOOD…club captain Scott Brown and Mikael Lustig, who led out the team, prepare to lift the trophy. 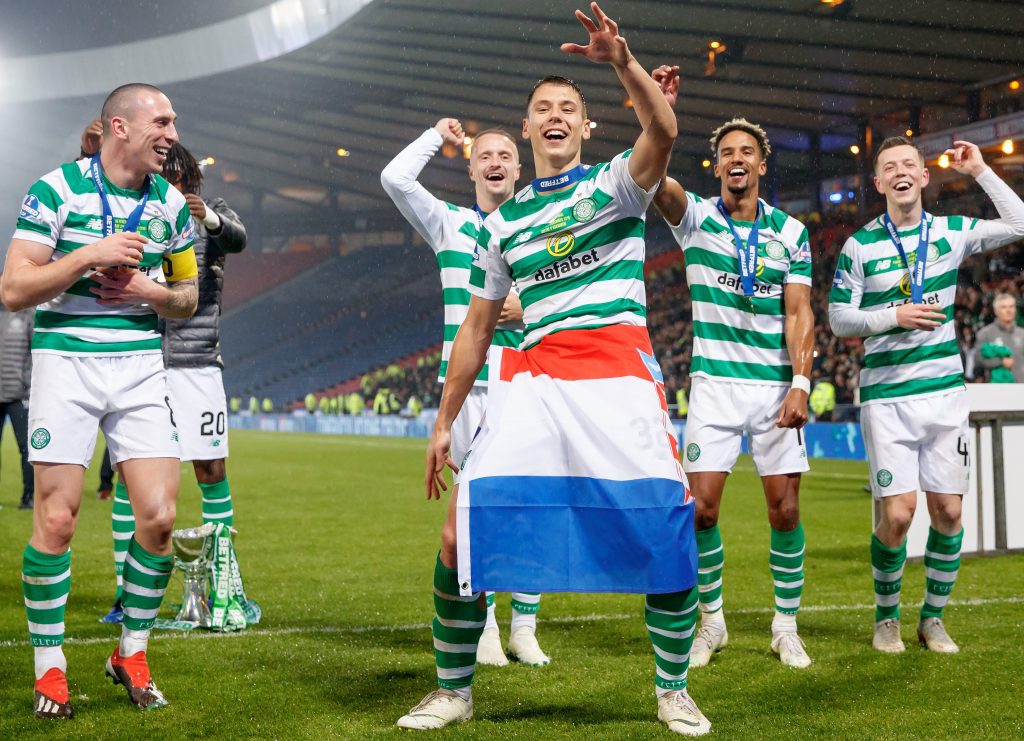 STRICTLY COME DANCING…a delighted Filip Benkovic shows off some of his moves to the fans. 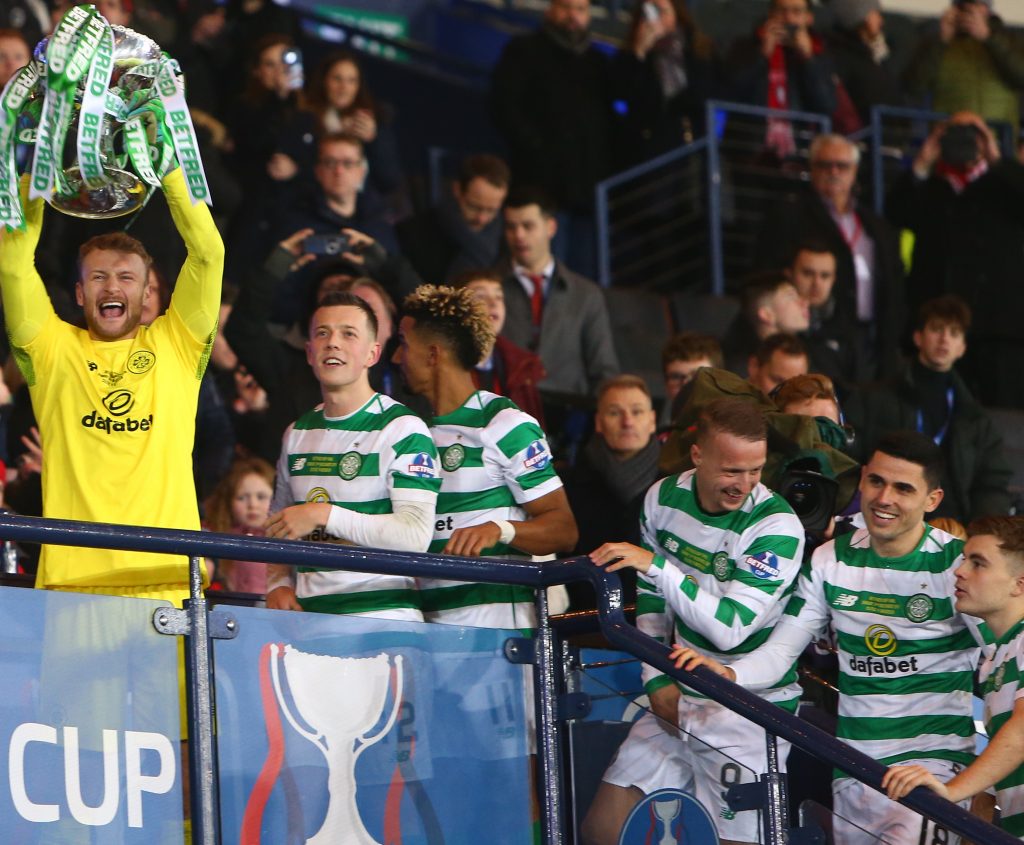 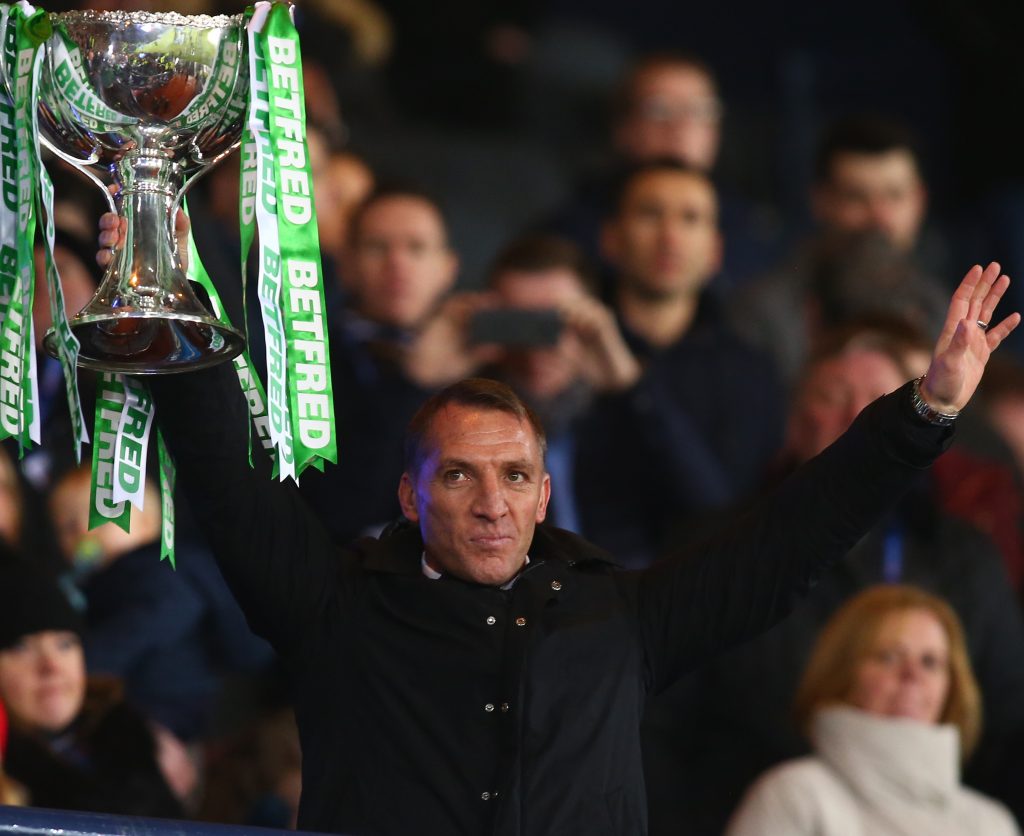 MAGNIFICENT SEVEN…Brendan Rodgers with his seventh successive trophy in his two-and-a-half years at Celtic. 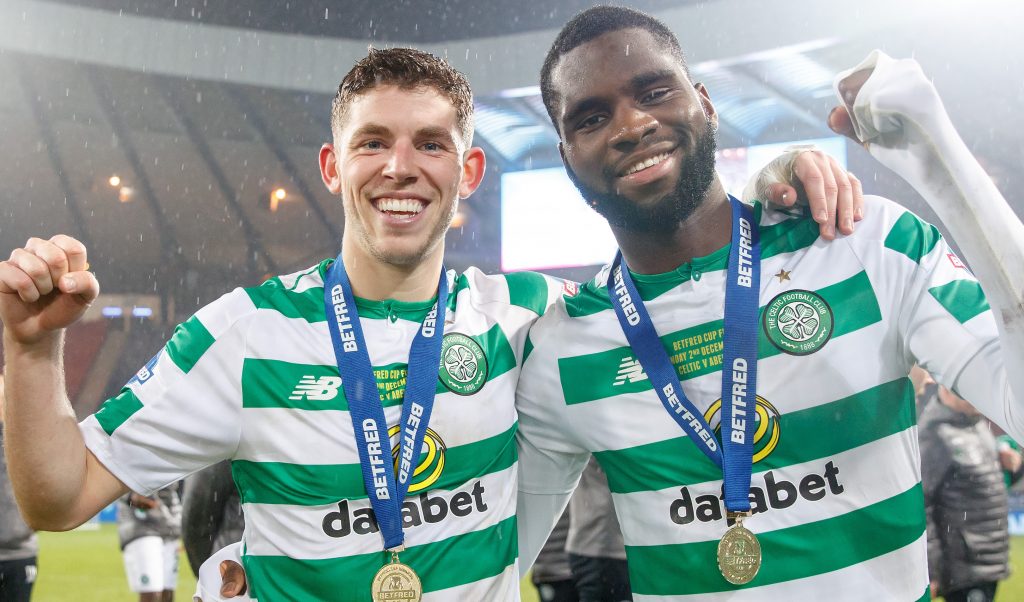 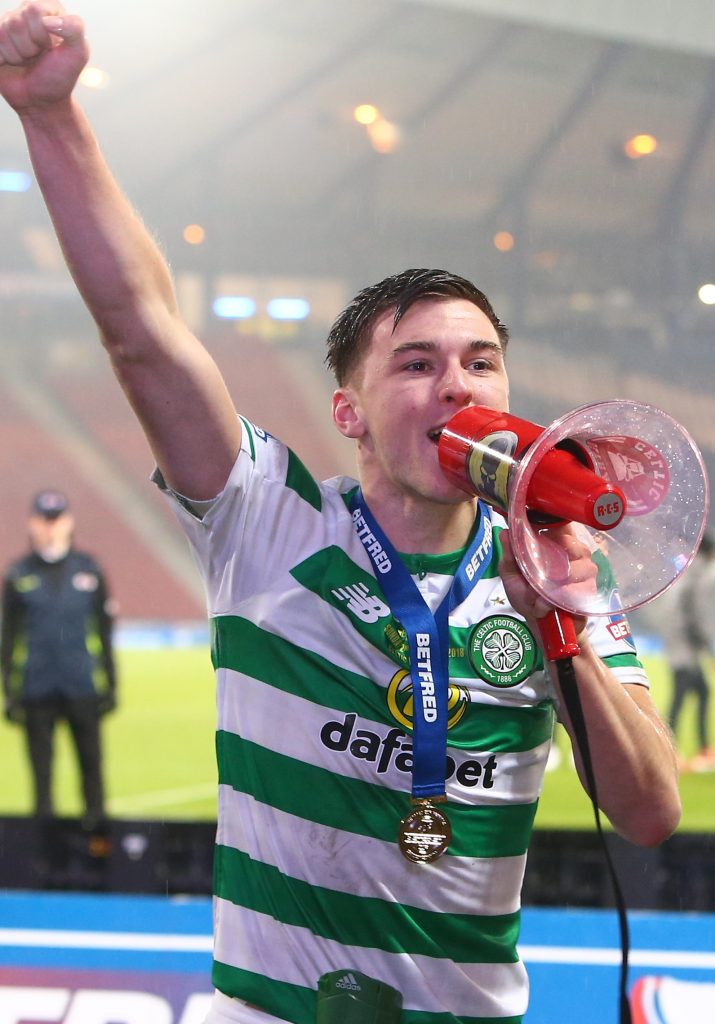 LET’S MAKE SOME NOISE FOR THE BHOYS…Kieran Tierney with a loudhailer at the final whistle. 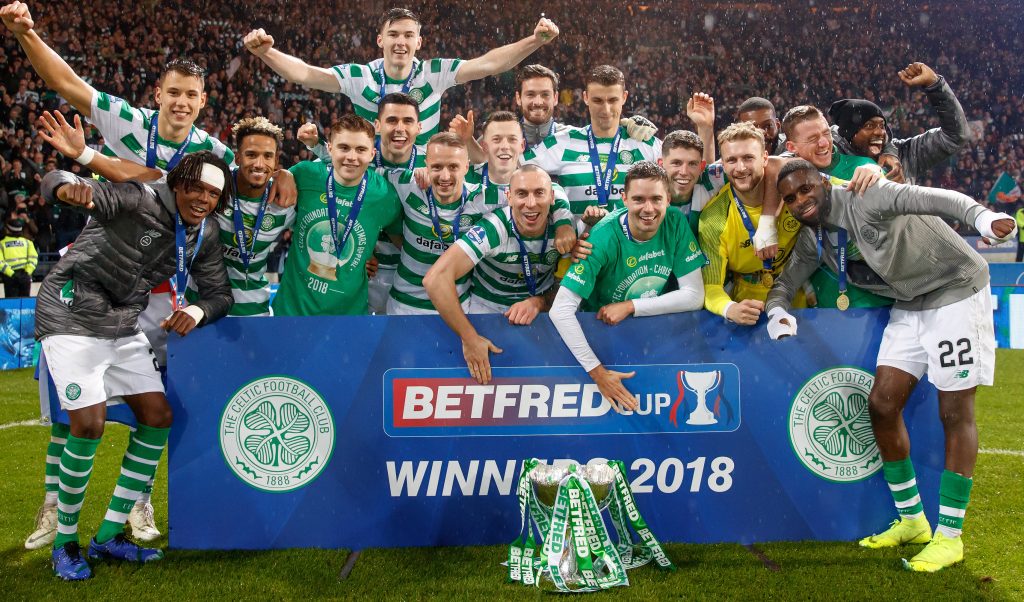 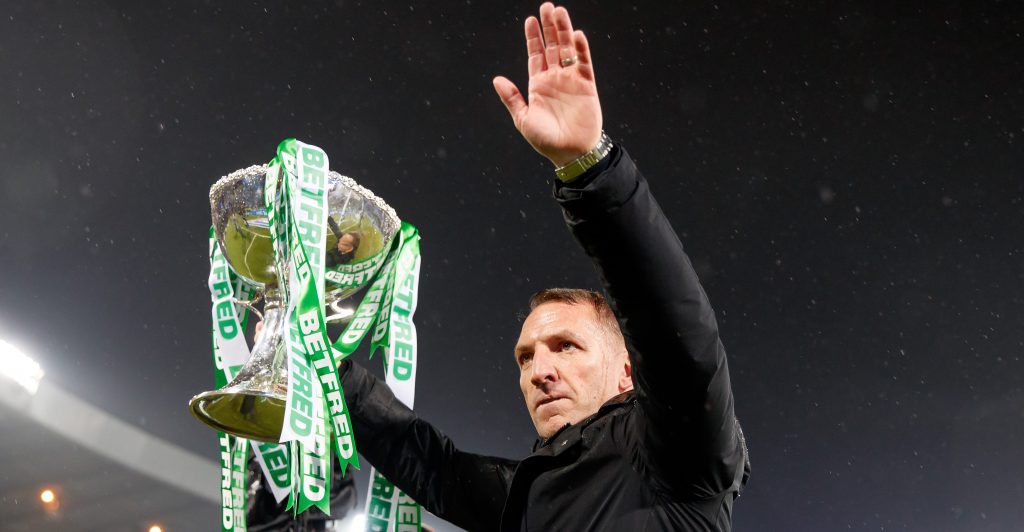 HAIL THE HERO…Brendan Rodgers accepts the accolades of the supporters as he displays the newly-won silverware. Pics: Geo.