NERVE-ENDS were shredded on Tayside yesterday when it looked as though Celtic were heading for their second successive scoreless stalemate.

The champions blew the opportunity to go 10 points clear the previous weekend following their nearest challengers from Ibrox being held 1-1 by Hibs at Easter Road on the Friday evening. Aberdeen came to Parkhead with their intentions very clear from first minute to last – a point was one gained at the home of the champions and not two dropped was their obvious philosophy.

And it looked as though relegation-threatened Dundee were singing from the same tactics sheet at Dens Park after Steven Gerrard’s team’s 1-1 deadlock with Kilmarnock in Govan 24 hours earlier.

Neil Lennon watched his players carve out openings, but they just could not find the quality finishing touches to make the difference to the scoreline.

Odsonne Edouard, going into the sixth minute of stoppage time, stirred himself to get on the end of a James Forrest left-wing cross to thump a first-timer beyond the helpless Seny Dieng, who had been a hero throughout the regulation 90 minutes, and the points were heading for the east end of Glasgow.

The champions, zeroing in on their eighth successive crown, now face Gerrard and Co at Parkhead at the end of the month where they now have the opportunity of going THIRTEEN points ahead with only seven games to play before the curtain comes down on the Premiership for season 2018/19.

Get that champagne on ice, folks!

CQN’s team of ace snappers were at Dens Park to capture the best of the action. Here is the pick of the pics. 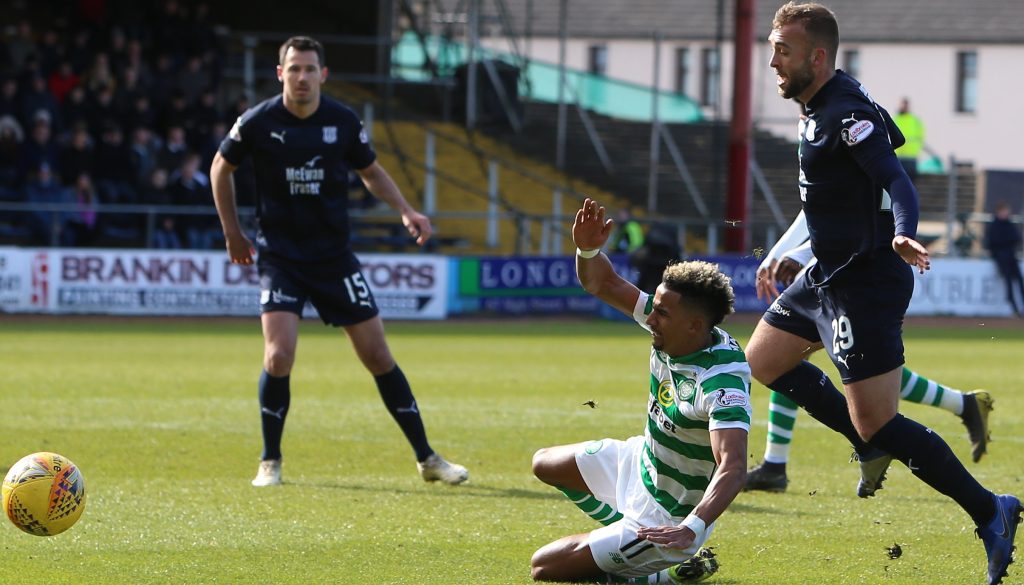 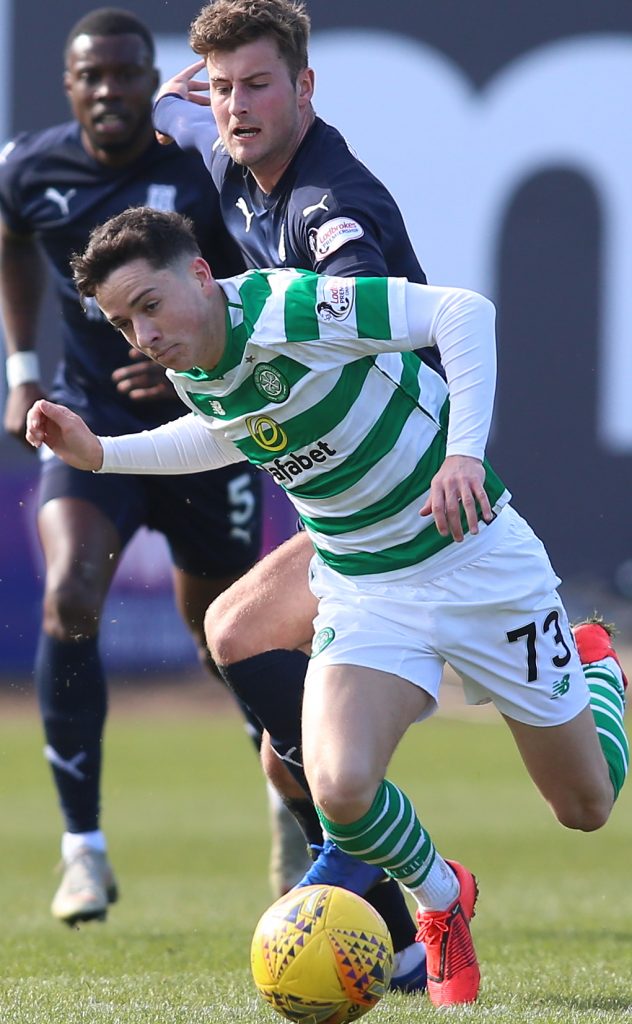 EARTHBOUND…Mikey Johnston is about to visit the turf following a trip from Ethan Robson. 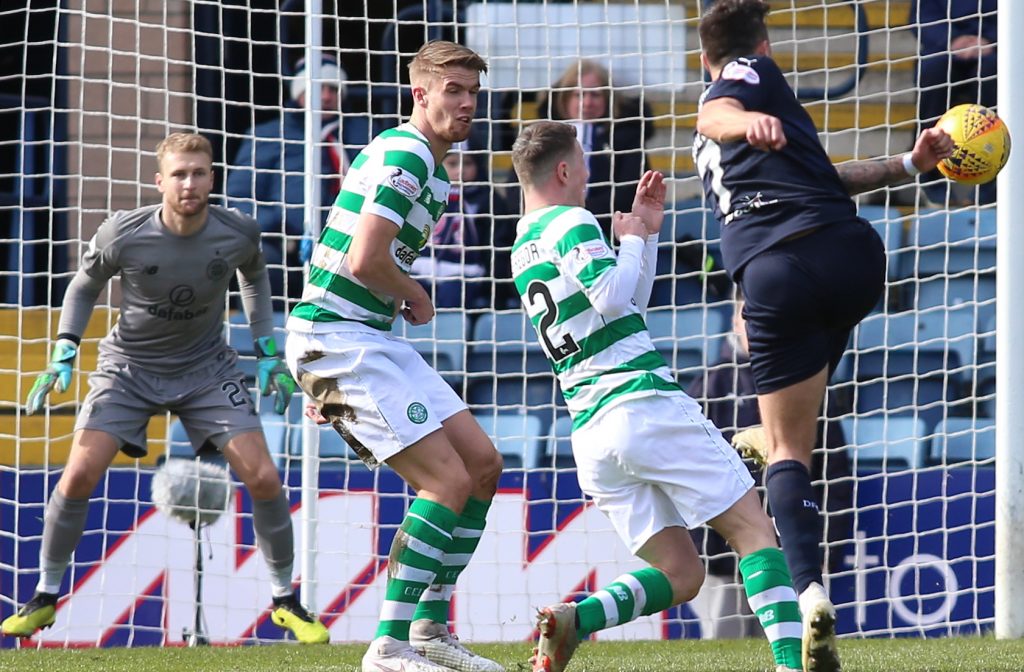 WALLOP…Scott Bain is poised to react as Kristoffer Ajer and Callum McGregor fail to prevent John O’Sullivan firing a shot at goal.

BY THE RIGHT…James Forrest volleys a ferocious effort at Dundee’s goal.

BY THE LEFT…Kieran Tierney tries his luck as Genseric Kusunga tries to block the effort. 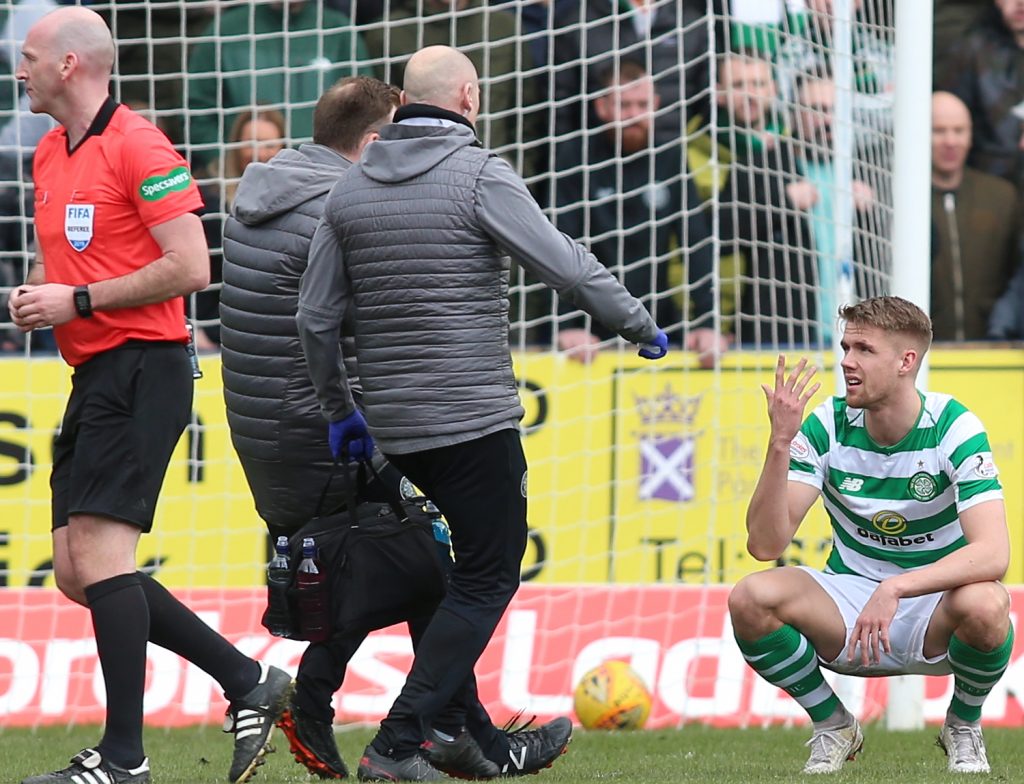 EYE SORE…Kristoffer Ajer complains of double vision after being hit on the head by a Kenny Miller volley. 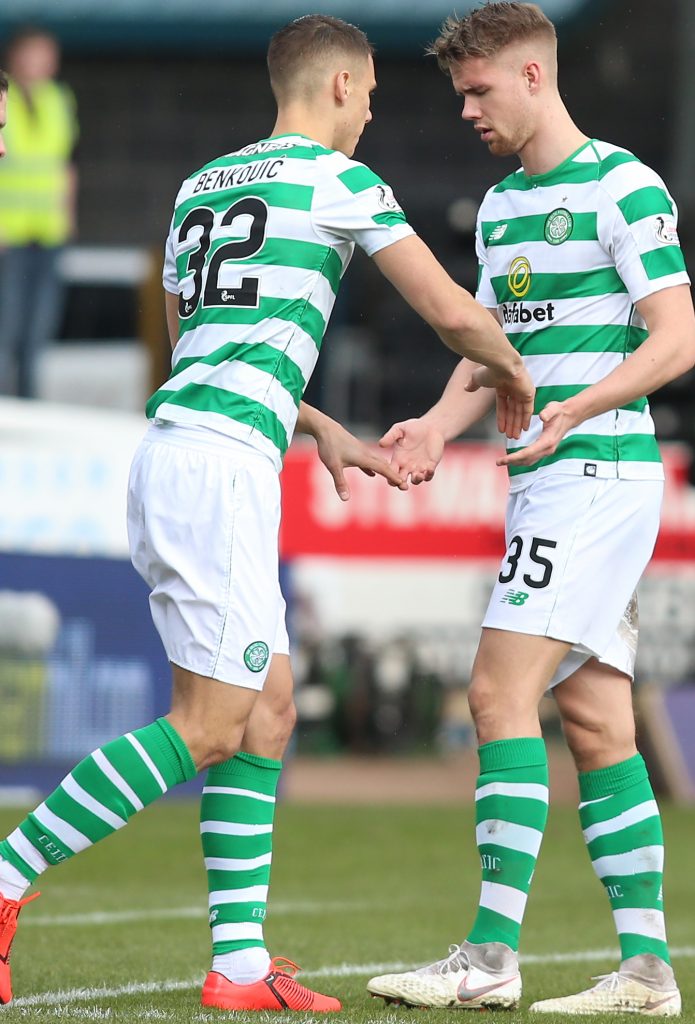 OFF AND ON…a groggy Kristoffer Ajer is replaced by comeback Bhoy Filip Benkovic. 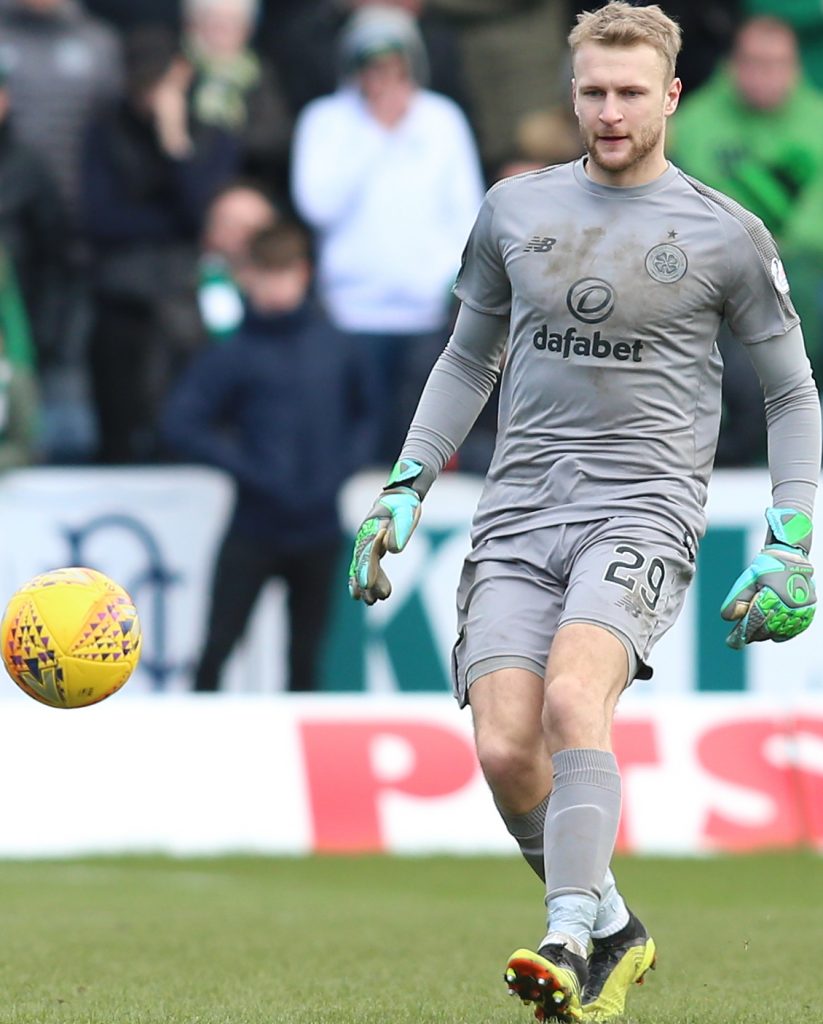 SWEEPER KEEPER…Scott Bain takes charge of the situation outside his penalty area. 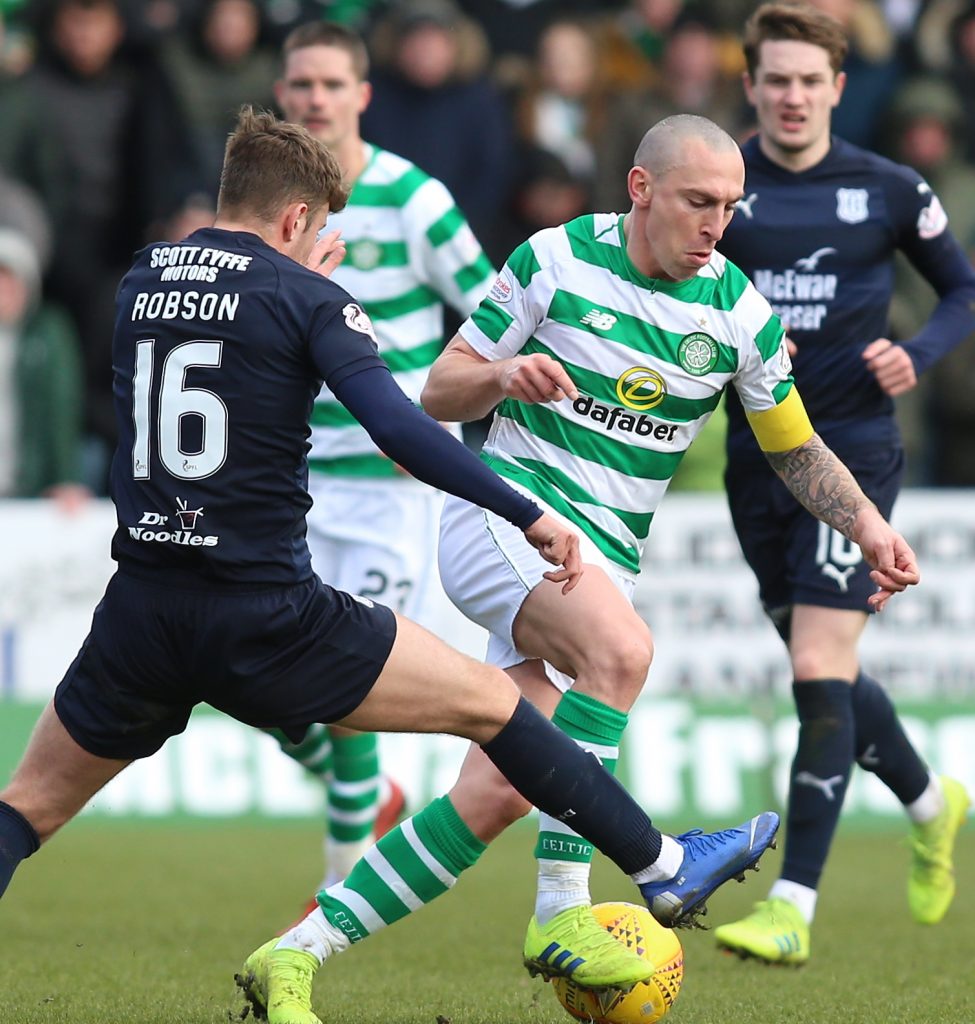 WING AND A PRAYER…Jeremy Toljan joins the attack in search of the breakthrough goal as Nathan Ralph moves in to tackle. 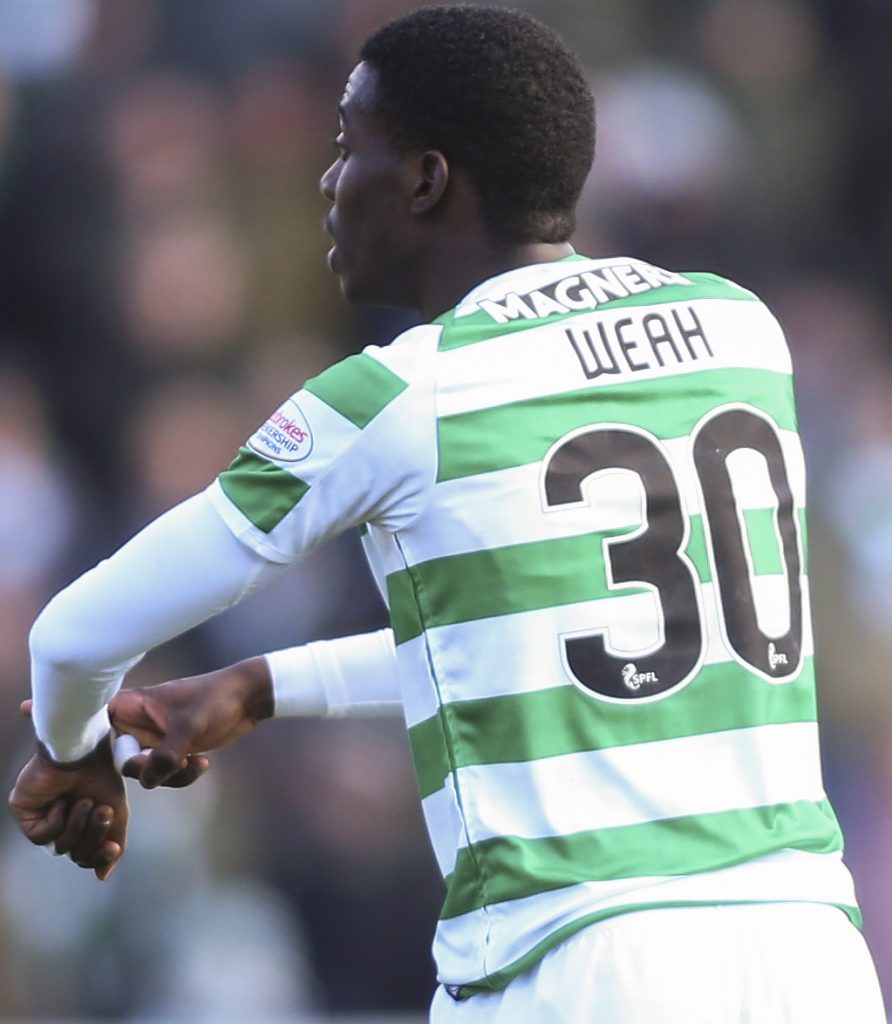 BARRIER BROKEN…Odsonne Edouard picks himself up after sliding in the late winner with Timothy Weah and James Forrest about to add their congratulations. 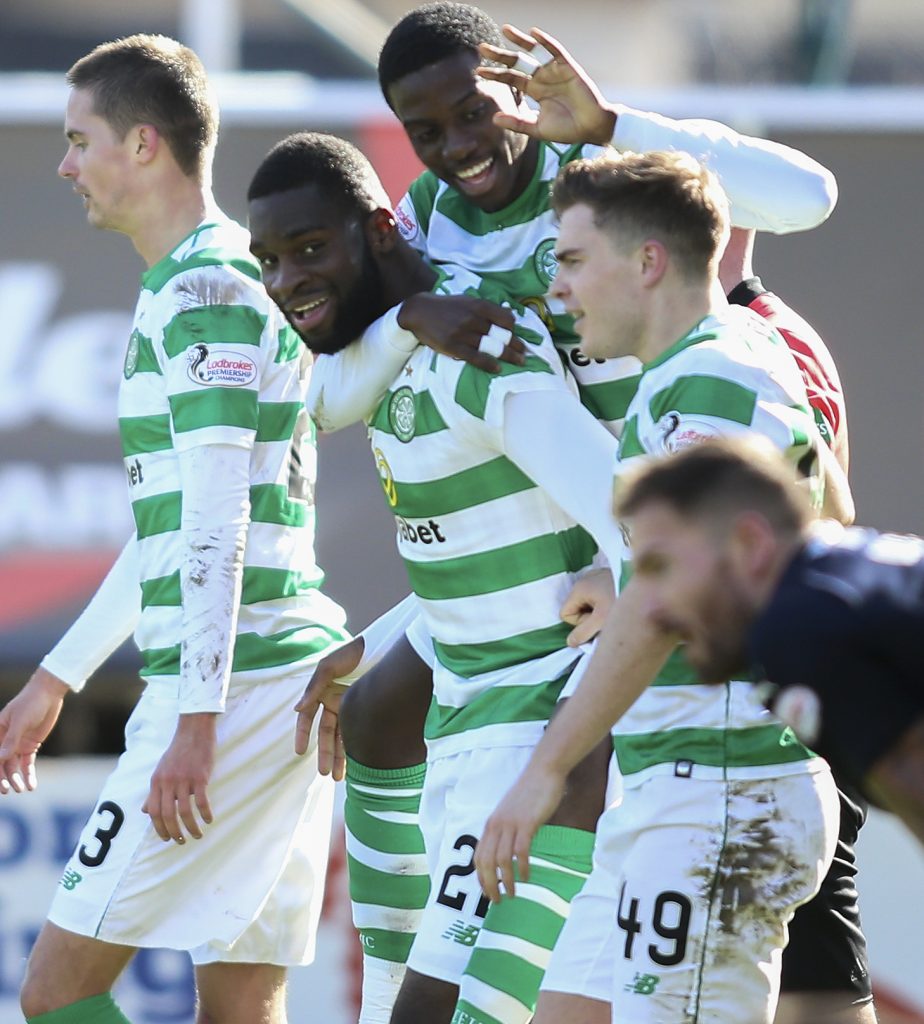 SMILES BETTER…Odsonne Edouard grins happily as he takes Timothy Weah for a ride while Mikael Lustig and James Forrest sigh with relief. 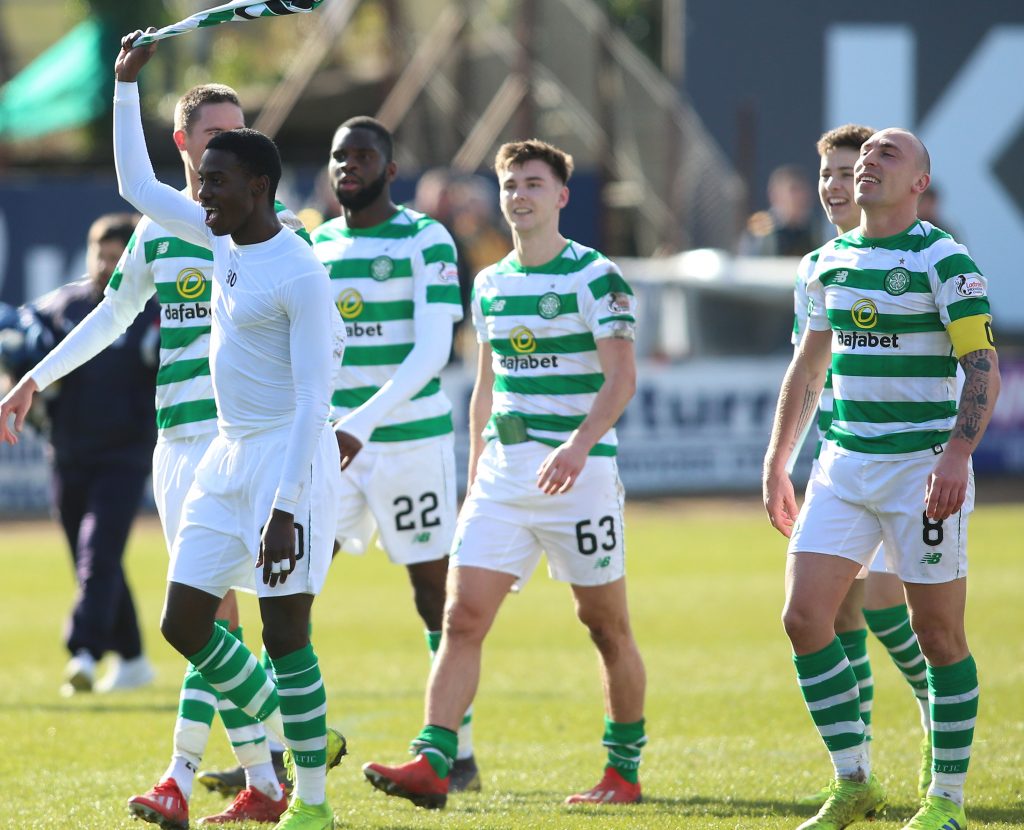 THE HALLELUJAH CHORUS…Timothy Weah waves his shirt as the Hoops players thank the visiting fans for their unstinting support – all the way to the 96 minute.