MIKEY JOHNSTON has admitted his frustration at his roller-coaster fortunes since the start of the season.

The exciting 20-year-old raider made an explosive start to the campaign and, fittingly, scored the first Premiership goal of the term in the 7-0 Flag Day romp against luckless St Johnstone at Parkhead on August 3.

The startling progress of Johnston, though, was interrupted by an injury sustained in the 2-0 victory at Ibrox at the start of September and he is still battling back to claim a regular starting place in Neil Lennon’s line-up.

In his absence, on-loan Mohamed Elyounoussi came in, picked up speed and put in a Man-of-the-Match performance in the 5-2 Betfred League Cup semi-final triumph over Hibs.

Unfortunately, he, too, sustained a foot injury while on international duty with Norway and, after struggling through the first-half of the 1-0 win over Steven Gerrard’s Ibrox side to lift the first silverware of the season, he will now be out until next year. 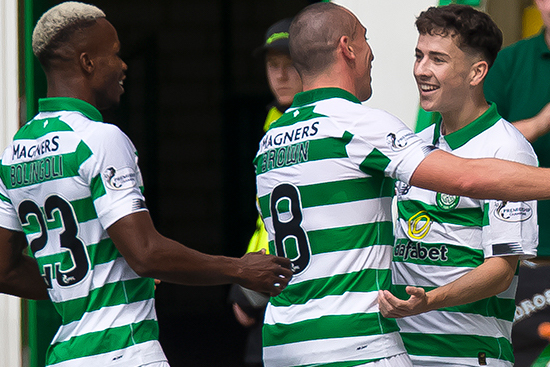 JOHNSTON JOY AGAINST ST JOHNSTONE…Scott Brown and Boli Bolingoli congratulate Mikey Johnston on the opening Premiership goal of the season.

Reflecting on the nine-match football feast for December, Johnston told the Celtic website: “It’s a hectic schedule, but you get loads of games under your belt.

“For me, it’s been a bit up and down. I was happy with the start of the season, injuries happen and there’s nothing you can do about it.

“Personally, it can be frustrating, but it’s something you have to deal with as a footballer and overcome it mentally. I’m happy with any minutes I can get, and I just want to play football, if that’s against St Mirren or Rangers, then I’m ready to go.”

Johnston added: “We’re just thinking about St Mirren. We’ve got one more game in front of us before the Rangers game and that’s all we’re thinking about at the minute.

“The first half of the season has been really good for us. We’re delighted in the way we’ve played and the games we’ve won and we want to continue that form right through to the end of the year.”

Johnston is now fully fit for selection and is determined to add to the six goals and five assists he has already claimed..