Celtic Quick News on News Now
You are at:Home»Latest News»LENNY INSISTS: ‘THE TEAM CAN GET BETTER’
By CQN Magazine on 24th December 2019 Latest News

NEIL LENNON has revealed his Celtic players have exceeded his expectations this season – but they can still do BETTER!

The Hoops boss saw his team overcome Aberdeen 2-1 at Parkhead at the weekend to rack up their tenth successive Premiership triumph.

They have been unstoppable as they have rampaged through the league since their shock loss to Livingston in West Lothian on October 6.

Now he is urging his stars to maintain their focus when they take on St Mirren in Paisley on Boxing Day and Steven Gerrard’s Ibrox outfit in the east end of Glasgow on Sunday.

The eight-in-a-row champions have battled through a demanding and hectic seven games of a nine-match schedule this month and have a League Cup and a five-point advantage in the Premiership to underline their efforts. 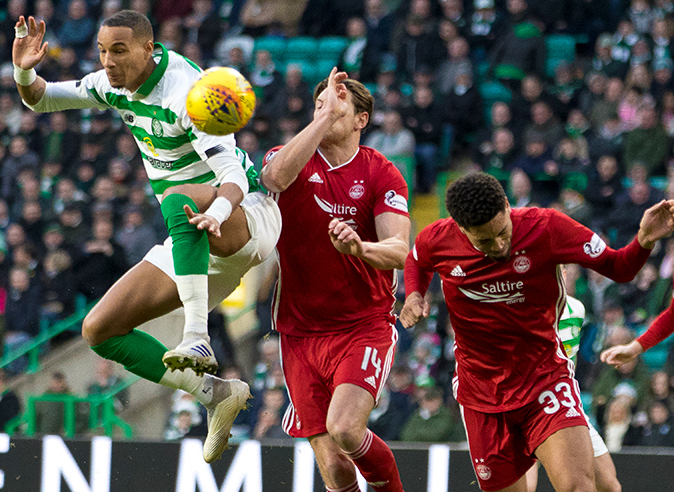 TOP BHOY…Christopher Jullien piles the pressure on the Aberdeen defence during the 2-1 win.

However, Lennon, speaking to the club website, insisted: “I think the team can get better and there’s more to come from them. What we’ve done in Europe is spectacular and what we’ve done domestically so far has been almost perfect.

“The amount of goals we’ve scored, the accumulation of the points we’ve accrued and the European campaign – that’s all definitely exceeded my expectations. We qualified with two games to go and won the group. We’ve already won a trophy, which is brilliant.

“Our priority is the league and we’re making really good strides in that aspect. I’m absolutely delighted and I’m really proud of how the players handle themselves on and off the field.”

A beaming manager added: “I think we’ve been absolutely tremendous. Our consistency has been excellent. Our style of play and the way the players have been approaching the games and winning the games with a certain style of play has delighted me.

“I can’t criticise any facet of the game at this stage, they’re playing brilliant and have got the bit between their teeth. We are 10 league wins in a row, and that’s very good. The way they’re playing at the minute, their mindset at this stage of the season, in a heavy December, they’re giving me everything.

“At the end of this month, they’re going to get a break. They can look forward to that, but they’ve got to focus on the next four or five days and not listen to the outside noise.”