GLORIOUS Celtic are through to the last 32 of the Europa League with two games still to play.

In a breathtaking evening in the Olympic Stadium in Rome, substitute Olivier Ntcham scored in the fifth minute of stoppage time to give the Hoops a dramatic triumph.

It was a night of celebration in the Italian capital as Neil Lennon’s men came back from a goal behind – as they had done in Glasgow a fortnight ago – to level through James Forrest and then seal a famous victory.

It was THIRTEENTH time lucky for the Parkhead side – the first time they have won on Italian soil after nine defeats and three draws.

The clock was ticking down with Lazio doing their utmost to get a points-clincher when a sloppy pass out of defence was snapped up by Odsonne Edouard who ambled forward before picking out his French countryman Ntcham racing in on the right.

He rolled the ball in front of him and the midfielder was calmness personified as he drew the keeper and then dinked the ball over his flailing arms into the net.

It was joyous bedlam as the ball hit the net and Celtic knew they had reached the knock-out stages next year as they hit the 10-point mark. 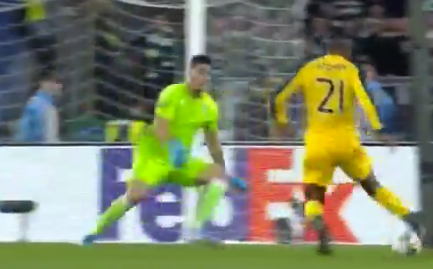 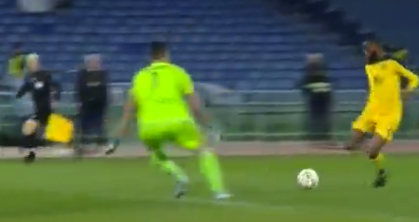 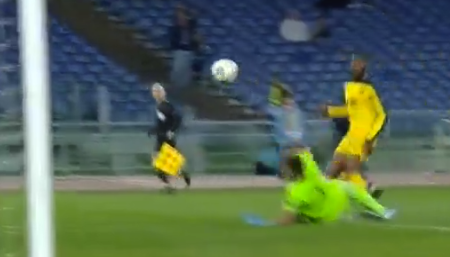 GONE…it’s in the back of the net as Ntcham races away in joy.

In the first-half, a moment of magic had given the visitors some breathing space in a period where they had been under the cosh right from the kick-off. They went behind in the seventh minute, but the 8,000 travelling fans were celebrating in the 38th minute when their heroes grabbed an equaliser.

Great credit must go to the perseverance of Odsonne Edouard who blocked a clearance and then chased the rebound down the left wing. The elegant Frenchman rolled a pass inside for Mohamed Elyounoussi to try to feed in James Forrest.

The ball was cleared, but the Norwegian international snapped onto a mis-control by an opponent to try again to pick out the winger. On this occasion, he was more successful.

Forrest took a touch before lining up and firing an angled drive that whipped wide of the diving Thomas Strakosha into the far corner. It was a finish that combined pulverising power and polished precision.

The Italians had been in control for a huge chunk of proceedings in the first 30 minutes when the Hoops found great difficulty in getting up the park and stringing three passes together with any degree of accuracy.

Neil Lennon’s men were penned in and it was no surprise when the Italians went ahead in the seventh minute. What was a surprise, though, was that dangerman Ciro Immobile was left unguarded by the defence to finish a simple move.

A cross was flashed over from the right and Christopher Jullien actually got a nick on the ball. Unfortunately, it dropped straight to the feet of the team’s most dangerous predator and he zipped a low effort wide of the helpless Fraser Forster into the right-hand corner of the net. 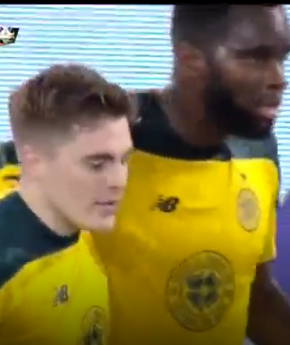 THE EQUALISER…James Forrest is congratulated by Odsonne Edouard.

Celtic responded to the loss of the goal by attempting to force their way into the Lazio half, but their quality was lacking in the final pass. Three times there were opportunities to create something in the space of 10 minutes only for the final pass to prove a disappointment.

In the 21st minute, Jullien got his angles all mixed up when he tried to play offside, but Immobile timed his run forward with perfect timing and it looked as though a second goal was moments away until Kristoffer Ajer raced back to put in an excellent intervention and dispel any fears for the visitors.

Five minutes later, Celtic failed to clear a right-wing corner-kick and once again the ball was worked to Immobile on the left, but Ryan Christie threw himself forward to block the shot.

The Hoops, though, were gaining in confidence as the half develop and only an overhit pass from Elyounoussi failed to set Edouard free after a neat one-two inside the box.

Celtic stepped up the tempo after the break and almost left their opponents breathless at their intensity.

Scott Brown and Callum McGregor combined to set up Edouard for a low shot in the 49th minute, but the keeper got down well to hold onto the rasping effort. 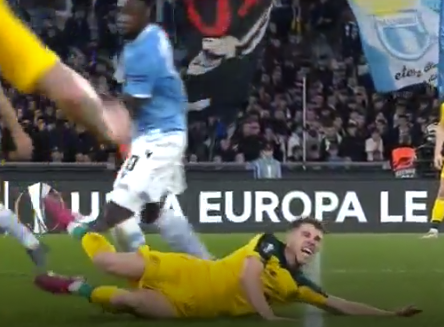 CRASH…Ryan Christie is sent hurtling to the turf.

A minute later, McGregor flashed a 20-yarder over the bar and moments after that Elyounoussi did likewise following a right-wing corner-kick. Once again, his attempt wasn’t too far away as it thundered just off target.

In the 68th minute, however, Lazio responded when Savic powered in a header and Forster was alert as he beat the ball away and Jonny Hayes completed the clearance.

Three minutes later, Edouard was robbed as he attempted to race clear and Denis Savro made a last-ditch clearance. Moments later, an inswinging right-wing corner-kick from the Italians hit the near post and was cleared.

Fourteen minutes from the end, Edouard – of all people! – missed an ideal opportunity to put the visitors ahead. He was played in by Elyounoussi and raced into the box with only Strakosha to beat.

The Celtic fans thought they were about to celebrate a wonderful goal, but the striker agonisingly tugged his shot just wide of the far post. 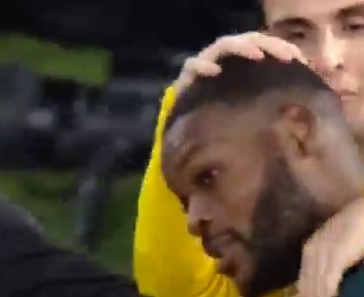 At the other end, Forster made two blinding saves to deny Lazio as they piled forward in a despearte search for the winner. In the 85th minute he got down superbly to beat away a shot in a Lazio breakaway and a minute later he bettered that with a breathtaking dive to his left to one-handed push away a drive from Luis Alberto.

Then came the moment to savour in the dying throes of stoppage-time when Ntcham waltzed through to chip in an unforgettable winner.

Lennon made three important substitutions in the second-half as he put on Ntcham for Christie, Nir Bitton for the limping Hatem Abd Elhamed and Moritiz Bauer for Forrest as he made sure of closing the back door.

This evening in Rome, Celtic had no failures. The team fought for each other after a shaky start and at long last conquered Italy.

It was well worth waiting for.