The Hoops boss couldn’t disguise his delight at the performance of his players following a hard-fought 2-1 Europa League Group E victory over Lazio three days earlier.

The Irishman claimed last weekend’s 6-0 rout of Ross County was as good as any, but thinks the champions’ spectacular four goal first-half display against Derek McInnes’ dismantled Dons was fairly special.

Lennon, speaking to the Daily Record, said: “It’s up there. It was just relentless, the quality of the play. It was fantastic to watch. I’d need to reflect on that.

“I’m just grateful for the win to come here after Thursday and play in the way we did speaks volumes for the fitness levels and their mentality at the minute.

“We were outstanding. We came in at 4-0, we could have had a few more in the second-half, but we had control of the game.

“The mentality of the team was brilliant today and their fitness levels came shining through.

“The overriding emotion is one of immense pride in that performance. The players take an enormous amount of pride in that, as well.”

Odsonne Edouard , Jeremie Frimpong, James Forrest and Mohamed Elyounoussi got the goals that made certain Scotland’s title kings are top of the Premiership this morning.

NUMBER TWO…Jeremie Frimpong rolls in his first goal for Celtic. 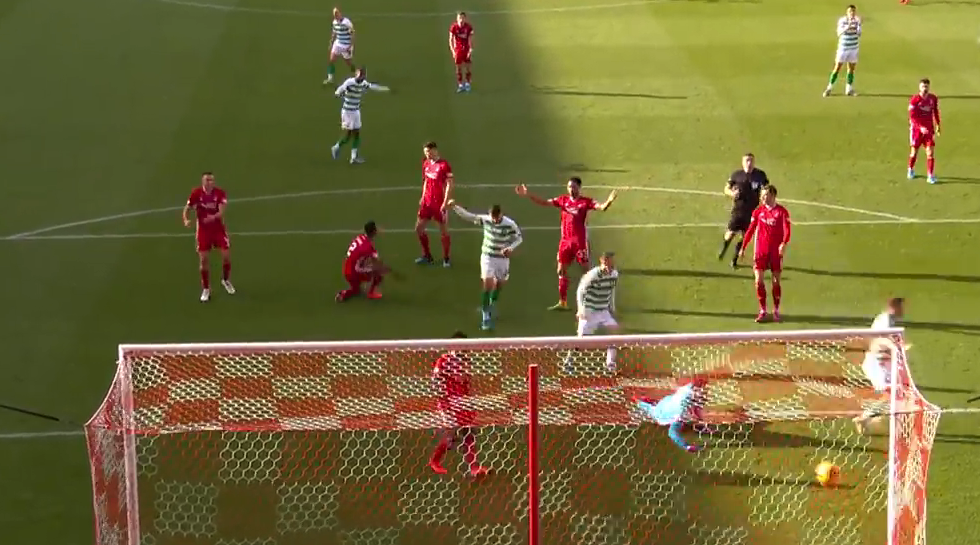 Lennon said: “I loved the Forrest goal. Mind you, Edouard’s was a bit special, as well. It was a special goal from a special player, a moment of individual brilliance.

“But the third and fourth goals were also good. Even Jeremie’s goal, the way we worked it, the combination play around the box against a team who were difficult to break down was sensational.

“We were red, absolutely red hot.”

The Parkhead chief was pleased, too, that his team had a clean sheet, despite European hero Christopher Jullien going off at the interval.

He added: “It was a good defensive performance. Our two centre-halves were excellent in the first-half, Jullien came off as there’s a virus going around the place.

“We took him off as a precaution so he’ll be okay to face St Mirren on Wednesday.

“Nir Bitton came in and his performance was exemplary.

”We had a brilliant week. That’s 10 goals in the league and a fantastic win against Lazio.

“Mentally and physically, it could have been draining for them. They have recovered brilliantly and gone out and played some outstanding team football.

“I think a lot of teams would have struggled with us and with the mood that the players are in. We sent them out to start the game well. That was important.

“We have got a front four which can hurt any team. It’s great place we are in at the minute.”

Lennon will not prepare his players for the visit of Jim Goodwin’s Paisley outfit in midweek.

And then his focus will switch to Saturday night’s Betfred League Cup semi-final against Hibs at Hampden. Paul Heckingbottom’s outfit were the first team to wreck the Hoops’ 100 per cent domestic record by holding them to a 1-1 draw at Easter Road last month.

The holders of the trophy for the past three years will be looking for another victory with the season’s first piece of silverware in sight.