CELTIC boss Neil Lennon had every right to feel satisfied with the champions’ latest victory after conquering the defence-in-depth tactics of resolute Hamilton Accies.

James Forrest tucked away what emerged as the matchwinner in the fourth minute following a wonderful sweeping movement that involved six team-mates, as CQN reported in our match summary.

Mohamed Elyounoussi, making his first appearance since agreeing a season-long loan from Southampton, whipped over a left-wing cross and the winger’s timing was flawless as he arrived at the near post to nudge the ball beyond the helpless Owain Fon Williams.

A landslide may have been expected after such a flying start, but it turned out to be the solitary difference between the teams on a day where windy conditions didn’t help the Hoops to put on a show.

Lennon praised his players afterwards for a landmark achievement – the team’s fifth Premiership win in succession and the first time in nine years.

With the the team eyeing nine a row and three points ahead already at the summit, the Irishman, speaking to the Evening Times, said: “It’s a case of three points, a very good performance in difficult conditions, five wins out of five which we haven’t done for a long time at the start of a season and a third clean sheet in five. 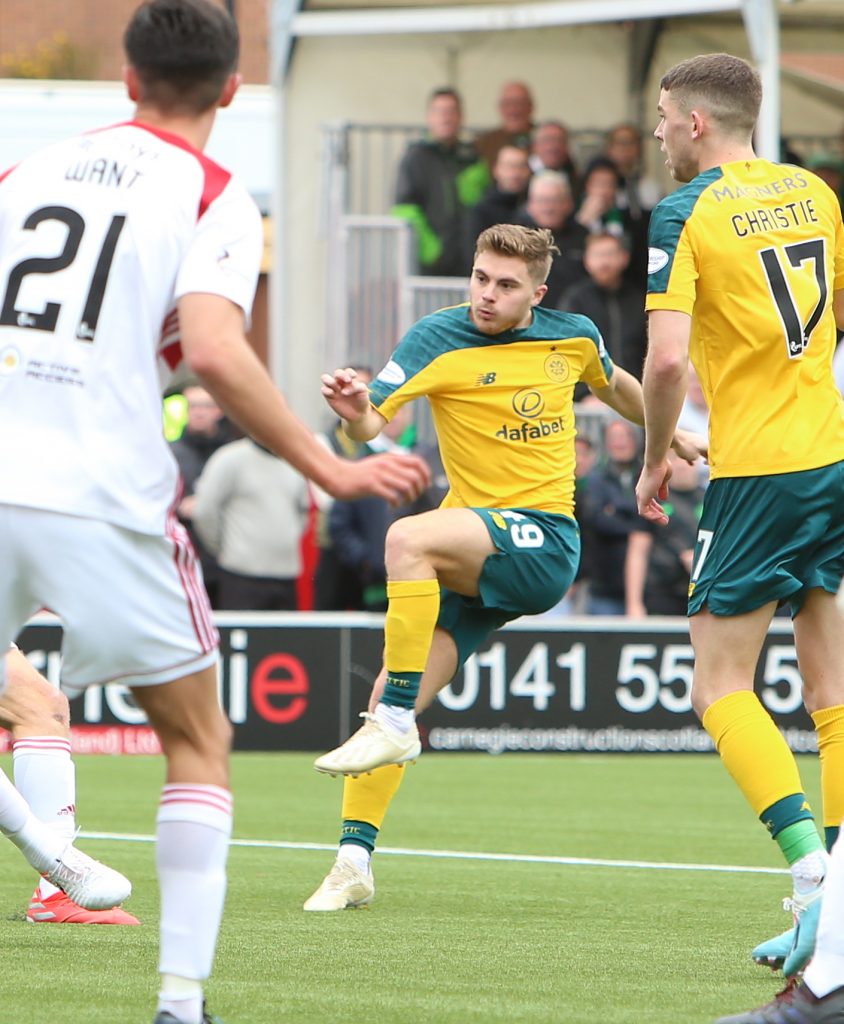 CRASH…James Forrest wallops in a left-foot drive that thumped the Accies bar.

“We are playing very, very well. The only tinge of regret is we didn’t score more. James hit the bar and you could see with the pitch drying up and the wind, it slowed the pitch right down.

“We have to give credit to Hamilton who set their stall out to be difficult to beat. In terms of being a spectacle, it takes two teams to make a game. We did all the running and there was no anxiety out there at all.

“I’m thrilled. You can see how difficult it is to do because we haven’t done it for a decade, so that’s a brilliant start to the season.”

Lennon was delighted with his wide men, debutant Mohamed Elyounoussi and goalscorer Forrest.

He added: “Mohamed had a really good hour.

“He hasn’t had a lot of football recently, but he looked fit and fresh, the good player we thought he was going to be.

“Obviously, as we go on we’re hoping he’s going to improve.

“I thought James was our biggest threat all day. His pace, the effort that hit the bar, his running power where he pulls one back for Odsonne Edouard and he was unlucky miscontrolling it.

“He scored another brilliant goal, and his run for it was great. That’s James on seven already and we’re only in mid-September.