Celtic Quick News on News Now
You are at:Home»Latest News»MAKE MINE A TREBLE: HISTORY-MAKER ODSONNE
By CQN Magazine on 20th December 2020 Latest News

ODSONNE EDOUARD could become a Celtic history-maker for the THIRD time against Hearts in the Scottish Cup Final this afternoon.

The French ace is already the club’s record-breaking transfer purchase at the £9million he cost when he agreed a permanent deal from Paris Saint-Germain in June 2018 after his initial impressive season-long loan.

Edouard was also the man who mattered when the Hoops faced the Tynecastle side in the Scottish Cup Final last year when he claimed the goal that catapulted the club into folklore with an unprecedented treble treble.

The season’s grande finale was edging towards its conclusion at Hampden on May 25 2019  when the flamboyant frontman raced onto a headed ball from Mikael Lustig, sped between Christophe Berra and John Souttar, drew Bobby Zlamal from his line and clipped a finishing effort over the exposed keeper’s shoulder with nonchalant ease.

Edouard wheeled away to be congratulated by ecstatic team-mates. He conjured up his little piece of magic in the 82nd minute after throwing the Hoops a lifeline in the 61st minute via the penalty spot following the Edinburgh side taking a shock lead shortly after the interval through Ryan Edwards with the Hoops defence in disarray. 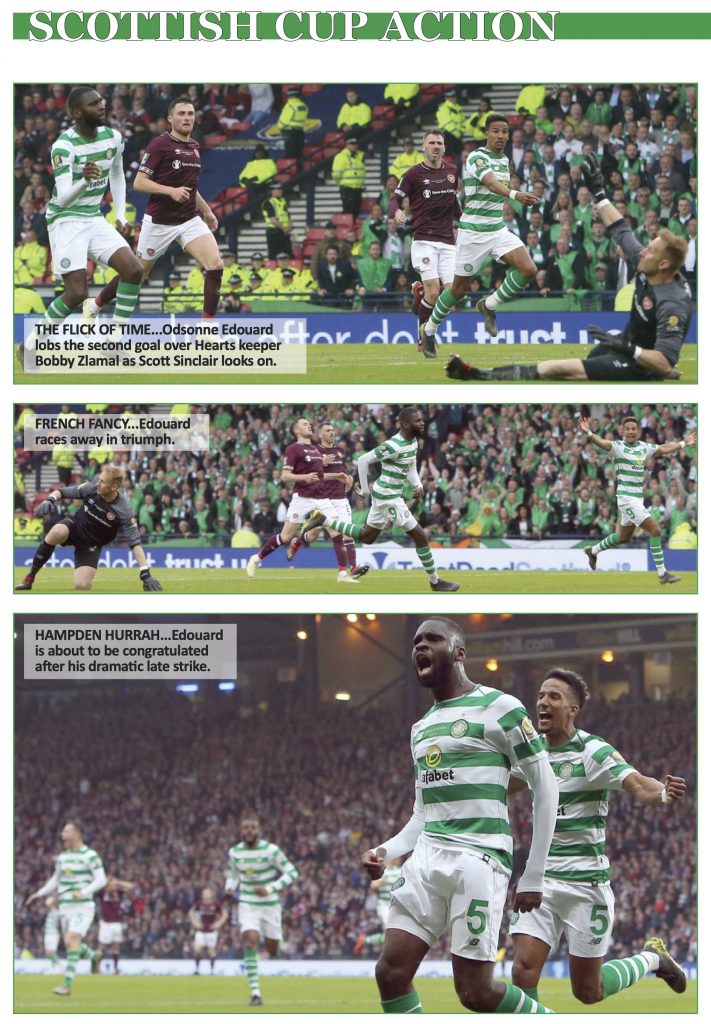 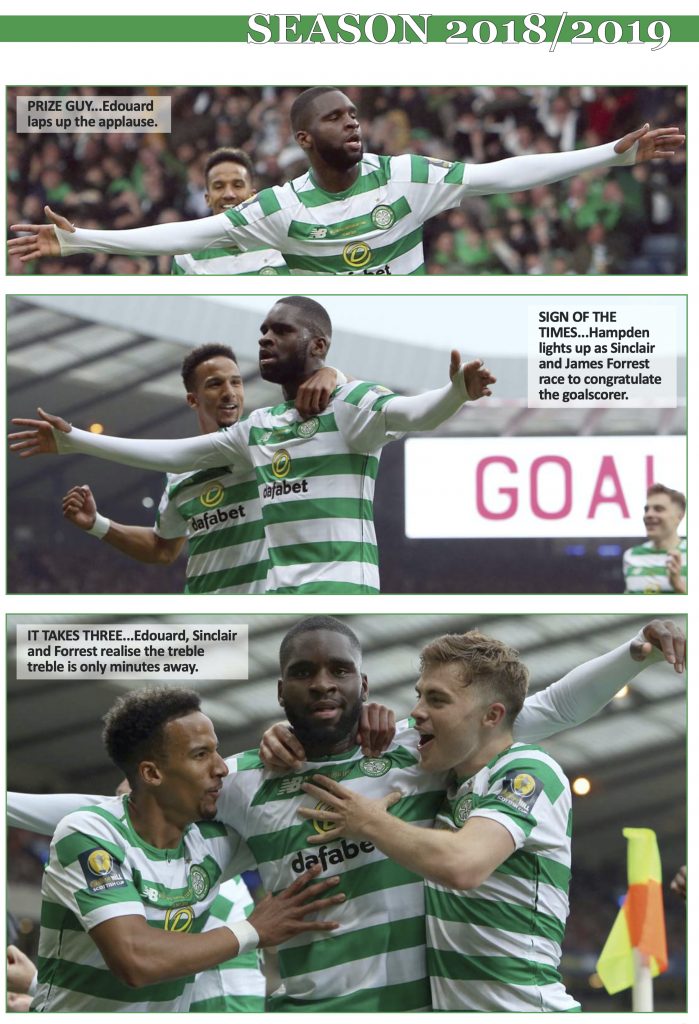 Author Alex Gordon, whose fifteenth Celtic book, ’50 Flags Plus One’, has just been published, recalled the historic occasion in his tribute publication, ‘Treble Treble’, which saluted the club’s momentous occasion on accomplishing their ninth successive domestic piece of silverware.

The former sports editor of the best-selling Sunday Mail recalled: “Neil Lennon made changes as he strengthened the team as the clock ticked down towards history and Olivier Ntcham, Scott Sinclair and Nir Bitton came on for Tom Rogic, Mikey Johnston and Jonny Hayes.

“Five minutes were added on as nerve ends stretched to snapping point before referee Willie Collum blew for full-time.

“The Celtic players stood at Hampden for that moment as it dawned on them what they had achieved. Lennon was clearly emotional as he fell to his knees.

“Memories are made of this.”

The glorious campaign is highlighted in ‘Treble Treble’ during an eventful campaign that saw Brendan Rodgers sensationally quit in February after leading the club to seven consecutive silverware successes. Lennon came in, steadied the ship, won the eighth title on the trot and capped his comeback at the national stadium.

Moments after the final whistle, the Irishman agreed a full-time contract at Parkhead.