Celtic Quick News on News Now
You are at:Home»Latest News»MARTINEZ, MALONEY AND ‘THE IMPOSSIBLE QUESTION’
By CQN Magazine on 28th February 2021 Latest News

SHAUN MALONEY has refused to rule out a dramatic return to Celtic along with Belgium boss Roberto Martinez.

The international duo have been among the avalanche of names in the great guessing game to take over from Neil Lennon who departed the faltering champions during the week.

Former Hoops and Scotland midfielder Maloney is part of the Spaniard’s backroom team as the world’s No.1 ranked nation prepare for the Euro Championships in June.

They have been linked with the Parkhead post while John Kennedy takes charge in an interim capacity and enjoyed a debut dug-out success in the 1-0 win over Aberdeen yesterday.

Asked on BBC Sportscene about the possibility of Martinez and him taking over as Celtic new dream team, Maloney answered: “It’s the impossible question for me to answer. I need to show respect to the Federation (the Belgian FA) that put massive faith in me.

“From a sporting point of view, I really hope Celtic, whichever decision they make, they make it quickly because these decisions have to be made.

“They can definitely fight for the title again next year and the big thing they have to do is get that connection with the support again because if that is not there, they will not be able to fight.” 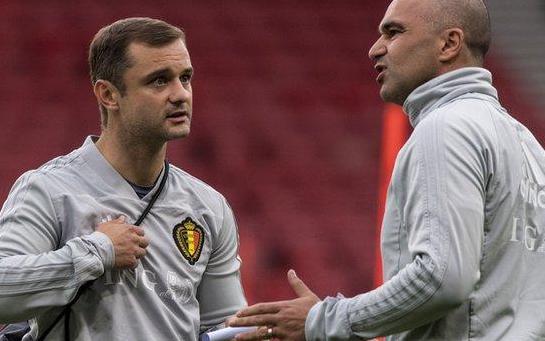 DREAM TEAM…Shaun Maloney and Roberto Martinez in training with the Belgium international squad.

Maloney, 38, had two spells at Parkhead after being introduced by Martin O’Neill in 2001. The Irishman also took him to Aston Villa in 2007, but the Malaysia-born playmaker returned a year later.

He was appointed head of the Celtic Under-20 development scheme in August 2017, but left just over a year later to team up with Martinez, his former Wigan gaffer.

The Belgian supremo is married to a Scottish girl he met during his playing days at Motherwell in 2001/02.

Liverpool reportedly considered appointing him in 2012 before switching to Brendan Rodgers and he eventually moved to Merseyside with Everton a year later.

The 47-year-old coach left Goodison in 2016 and took over the Belgium national squad.

The possibility of a Martinez-Maloney pairing in the east end of Glasgow is an intriguing one for the Celtic fans as the names come thick and fast for a long-term successor to Lennon.