LEWIS MORGAN wants to become a Celtic copy cat – and follow the lead of Ryan Christie.

The 22-year-old Scotland international winger, who cost a bargain £300,000 from St Mirren at the turn of the year, has been impressed by the emergence of the Highlander in recent weeks.

Brendan Rodgers has already admitted he wants the skilful midfielder, who returned in the summer after spending 18 months on loan at Aberdeen, to agree a contract extension before his current deal expires at the end of the season.

Christie, who arrived at Parkhead in the summer after being allowed to return to the Paisley side to lead them to Premiership promotion, said: “I am happy for Ryan. He has done really well in the last few games.

“He has trained well, he has had to bide his time and that is  something I hope will come my way.

“It is frustrating not playing, but the team are doing well. You want to help out, but you have to be patient as Ryan was and now he is doing really well.

“He deserved his place and, hopefully, he will remain there. I don’t want to be put in because of injuries. I am trying to show every day why I should be playing.

“The most important thing is the team, but if I can come on and  influence things then I will see where that takes me.”

Morgan, who made his first start for the Hoops in 2-0 loss in Lepzig a fortnight ago, could feature in the return Europa League Group B encounter against the Germans at a packed Parkhead tomorrow night.

Now he has set his sights on a first team breakthrough, the tricky raider has ruled out the possibility of a temporary transfer from the champions.

He added: “When I came in I didn’t want to go anywhere else so that was never a possibility. I am here and I want to try to fight for my place at this club. 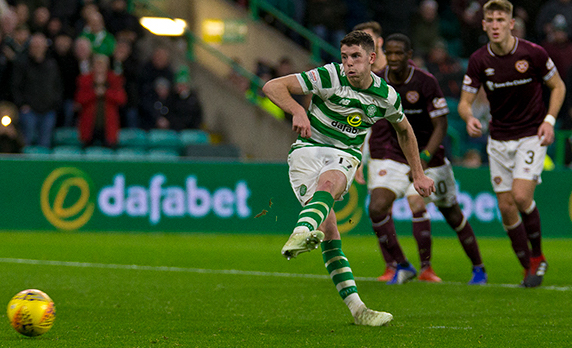 SPOT ON…Ryan Christie strokes home a penalty-kick for the fifth goal against Hearts.

“I don’t think it is now or never. I am 22, so I have 10 or 15 years ahead of me. I don’t put that pressure on myself. What I do is come in and work hard and try to show the manager why I should be in the team and when that chance does come I will be in a position where I can take it.

”We’ve come through that spell where the results weren’t what we wanted them to be.

“A lot of that was down to other teams trying to figure out the best way to approach games against us, given all the success the team had in the previous two years.

“They were trying to combat that, but now we’ve got used to breaking them down and the goals are coming again. We’re also not conceding so everything seems to have come together.

“European football is a lot different. Domestically, we’re used to having to break teams down, but we need to approach games differently in Europe because the standard of the opposition is higher.

“But we definitely have enough to get the win. We showed in patches over there we were a match for them and we’re full of confidence. It was an open encounter in Leipzig and they have a similar style to us, so it should be an entertaining contest.

”We had targeted the home games as the ones where we could really put a marker down in Europe because playing abroad is always tough and anything you get is a bonus.

“But you’ve seen in the past Celtic Park can be a massive asset for us on the night.”