The Israeli right-back, who arrived at the club from Hapoel Be’er Sheva in a £1.2million deal last month, was brought into Neil Lennon’s Euro squad at the expense of Australian winger Daniel Arzani.

He will be on the flight to Romania this afternoon, but there will be a doubt about his readiness to face Dan Petrescu’s side.

Elhamed impressed in the first-half of his debut in the 7-0 rout of St Johnstone Flag Day at Parkhead on Saturday, but, unfortunately, he lasted only six minutes after the turnaround before limping off to be replaced by Anthony Ralston. 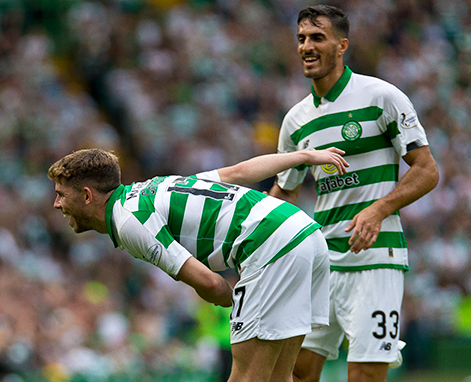 Lennon admitted the defender had sustained a dead leg in the opening 45 minutes, but wanted to put it to the test in the second-half. The Hoops gaffer took him off immediately it was obvious the player was not running freely.

However, it is highly unlikely the Irishman will change his squad before tonight’s wild card deadline and Elhamed will be given every opportunity to face the Romanian champions in his first Euro appearance for his new club.

Kristoffer Ajer has played in the wide-right defensive position in the previous ties against FK Sarajevo and Nomme Kalju.

Christopher Jullien and Jozo Simunovic, who served domestic suspensions and missed the opening-day destruction of the Perth Saints, could both return to central defence against Cluj.