SCOTT BROWN was Celtic’s last-gasp hero as he played a captain’s role while guiding the champions to victory over stubborn Hamilton Accies at Parkhead this evening.

And as his low, angled drive swept wide of the keeper into the far corner in the closing stages, Neil Lennon’s side opened up a two-point gap on their nearest challengers with Steven Gerrard’s side drawing 2-2 with Aberdeen at Pittodrie.

The Hoops were reeling when Accies forced a late leveller, but Brown led the charge for the winner and managed to glide away from three challenges before stroking the winner into the net.

Cue joyous bedlam in the east end of Glasgow!

Boss Lennon had demanded a high tempo from his players right from the start, but there was little for the fans to get too excited about in the opening stages.

James Forrest had a right-foot drive blocked before top scorer Ryan Christie grabbed the breakthrough strike in the 13th minute. Once again, the playmaker displayed great composure in the penalty area to claim his 17th goal of the campaign. 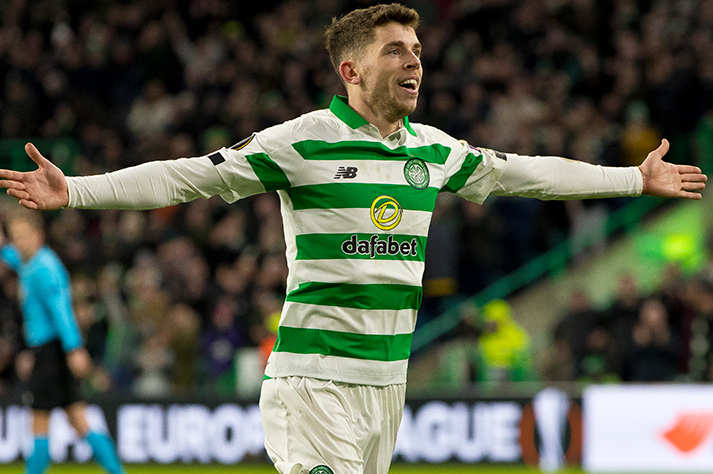 Brown and Callum McGregor combined before a pass set up the menacing Lewis Morgan to have a whiplash left-foot drive at goal. Luke Southwood got down well to his left to push the ball out, but Christie snapped onto the rebound to lash in an unstoppable shot into the net for the opener.

It was all the Hoops deserved as they dictated the flow of play without, it must be admitted, unduly bothering the visiting goalkeeper. In fact, Morgan’s effort was the first shot on target.

In the 24th minute, the ball broke to Olivier Ntcham on the edge of the box, but his first-time effort was wild and flew harmlessly over the crossbar.

Eleven minutes later, a piece of trickery from Forrest on the edge of the box opened up a shooting opportunity, but the winger curled his finishing attempt wide of the left-hand post.

Christie had the opportunity to add to his earlier strike when a left-wing cross broke to him, but he leaned back as he struck the ball and thumped the ball off target.

Greg Taylor set up Ntcham in the 38th minute with a neat forward pass, but the Frenchman contrived to toe-poke the ball past the upright from eight yards.

The procession continued and there was a bizarre moment in the 43rd minute when Forrest danced away from two challenges to line up a right-foot shot, but his goalward-bound attempt struck Christie and was cleared.

At half-time, the champions had to be content with a one-goal advantage which was scant reward for their possession.

It was somehow ironic that the whistle to bring the half to an end saw TEN Accies players in their own box as Celtic tried to build an attack on the left wing. It was clear Brian Rice hadn’t sent out his players with any instructions to entertain in the east end of Glasgow. The remaining visitor was 10 yards outside the penalty area.

If their idea had been to smother the Hoops in a defensive blanket it was working to a certain degree with Christie’s goal the only difference at the break.

Two minutes after the turnaround, McGregor had a shot blocked before Accies’ Lewis Smith tried a left-foot effort that went wide of Fraser Forster’s left-hand post.

There was a scare in the 55th minute when Aaron McGregor got into a good position following a set-piece situation, but his header was knocked onto the post by the sprawling Forster.

In the 59th minute, Ntcham was removed with Mikey Johnston making his third substitutes’ appearance in as many games.

Two minutes later, Christie set up Morgan for a shot inside the box, but Southwood managed to smuggle the ball past the post for a corner-kick.

Shortly afterwards, Christie tried his luck from outside the bx, but his elevation was just out and once more the ball carried over the crossbar.

In the 65th minute, Christie picked out Kristoffer Ajer with an inch-perfect free-kick from the right, but the Norwegian made a mess of his close-range header and also knocked the ball off target. It should have been a goal. 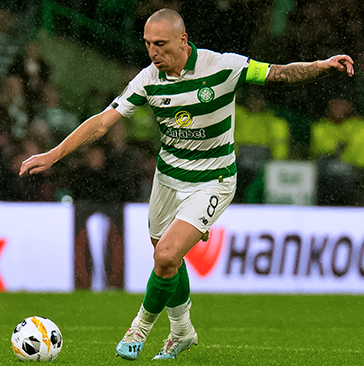 CAPTAIN COURAGEOUS…Scott Brown played a major part in the success yet again.

In the 68th minute, it was time for Leigh Griffiths to be introduced as Morgan came off with Lennon’s men desperately pursuing a second goal.

Moments later, Taylor and Johnston combined on the left to allow the substitute a shooting opportunity. He wasted no time in fizzing in a low shot that zipped low past Southwood, but, unfortunately, clattered off the foot of the right-hand post and bounced to safety.

There was another incredible miss when Griffiths flashed the ball across from the right, but it ended with Taylor hitting the ball wide from close range.

As the clock ticked down, Jeremie Frimpong came on for Forrest.

Dreadful defending from a setpiece allowed Accies to draw level in the fading moments when Marios Ogboe was allowed time in the box to turn and hit a low shot past the helpless Forster.

That set the scene for Brown to make his dramatic impact with his left-foot effort that swept past the keeper for the winner.

It was a fascinating grand finale on an evening where Celtic made life tough for themselves.

Leagues are won and lost on evenings like this one.