Celtic Quick News on News Now
You are at:Home»Latest News»POSTECOGLOU BROADSIDE: ‘PEOPLE WANT TO PUSH ME OFF SOME KIND OF LEDGE’
By CQN Magazine on 26th September 2021 Latest News

ANGE POSTECOGLOU launched a remarkable attack on his critics who, he claims, are “trying to push me off some sort of ledge”.

The Celtic manager’s astonishing reaction came in the aftermath of a frustrating 1-1 draw with Dundee United at Parkhead that saw his stuttering side drop their ELEVENTH point with only three wins from their seven Premiership games.

It was a day where very little went right for the Hoops after opening the scoring through Liel Abada, the Israeli winger’s sixth goal of the campaign.

However, the Tannadice side pegged it back two minutes later before David Turnbull smacked the underside of the crossbar just before the interval and Tom Rogic and Filpe Jota suffered a similar fate in the fading moments of a disappointing encounter.

Plus Josip Juranovic limped off in the first-half and James McCarthy, who had taken some fierce punishment, remained indoors at half-time. Now the race is on to get them fit for the home Europa League Group G encounter with Bayer Leverkusen on Thursday night. 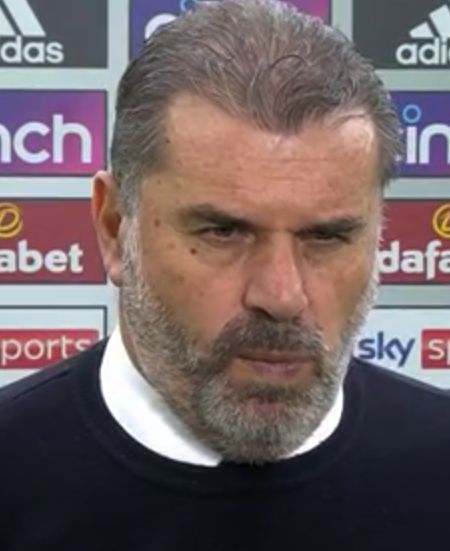 DEFIANT…Ange Postecoglou faces the media after the 1-1 draw with Dundee United.

Postecoglou said: “I know people want to push me off some kind of ledge. It’s not going to happen.

“I don’t worry about those kinds of things. I’m focused on how my team’s playing and what we’re trying to create.

“I don’t really know what people want me to say. I know what the club’s about and what we’re aiming for, I believe the road we’ve started on will get us there so we’ll just keep going.”

The Hoops are now trailing Steven Gerrard’s team by six points while occupying sixth place in the league.

“It’s quite remarkable. We’re only seven games in and people are calling the title already over.

“It’s just not how it works. I’m not pulling up stumps after seven games just because people think there’s some kind of insurmountable challenge out there for us.

“If we weren’t playing well I’d be looking at things differently. But with the efforts we’re putting in, the football we’re playing, the chances we’re creating and the players we have to come back, I just see it differently.”