ANGE POSTECOGLOU admits the way he wants Celtic to play makes it difficult for Carl Starfelt and Cameron Carter-Vickers.

The central defenders are still getting to know each other’s styles with the partnership not even six weeks old.

Carter-Vickers agreed a season-long loan switch from Spurs on deadline day and made a goalscoring debut in the 3-0 Premiership win over Ross County at Parkhead on September 11.

Starfelt was pitched into the team only 48 hours after arriving in a £4.3million deal from Russian cracks Rubin Kazan and was on the receiving end as Hearts snatched a last-minute goal in the 2-1 opening league encounter at Tynecastle at the end of July.

The Swede has already partnered Stephen Welsh and Nir Bitton in the heart of the rearguard and Postecoglou is looking for the pair to cement their understanding as the weeks roll on.

There are signs an understanding is beginning to gel and the defensive double-act put in their best performances in the two back-to-back away league wins at Aberdeen and Motherwell – where the team had its first clean sheet on their travels this season – and Tuesday’s 2-0 Europa League Group G triumph over Ferencvaros.

Postecoglou said: “I felt for Carl because we threw him in. He had different centre-back partners in the early stages and he was new to the club himself. People were kind of judging him on what they saw, but I knew there was more in him and I still think there’s more again.

“We signed Cam on deadline day then virtually threw him into the first team. But he is a really calm character and mature beyond his years.

RISE AND SHINE…Cameron Carter-Vickers in an aerial joust with ex-Celt Tony Watt.

“Even though he’s fairly young, he’s settled into the club really well and the key thing for the two of them is they want to learn, they want to improve.

“Every week they are sitting down with the coaches and doing the analysis and they are getting confidence from that.

“The way we play is not easy for any centre-backs. We ask a lot of them. We ask them to be playing out from the back then to squeeze up and be aggressive with our defending.

“It’s a lot easier to be playing centre-back in other teams, I can guarantee you. But they’ve tackled it and we know there’s more to come from both of them. Joe Hart’s experience helps.

“We’ve shown faith in them and I’ve said to them all along if something happens out on the pitch and it doesn’t work out then I’m accountable for it, not them. I’m not going to judge them on what happens in the first part of their Celtic careers.

“What is important for me is they’re continually looking to learn and understand how we want to play our football. If I see that I keep encouraging them and that has been happening.” 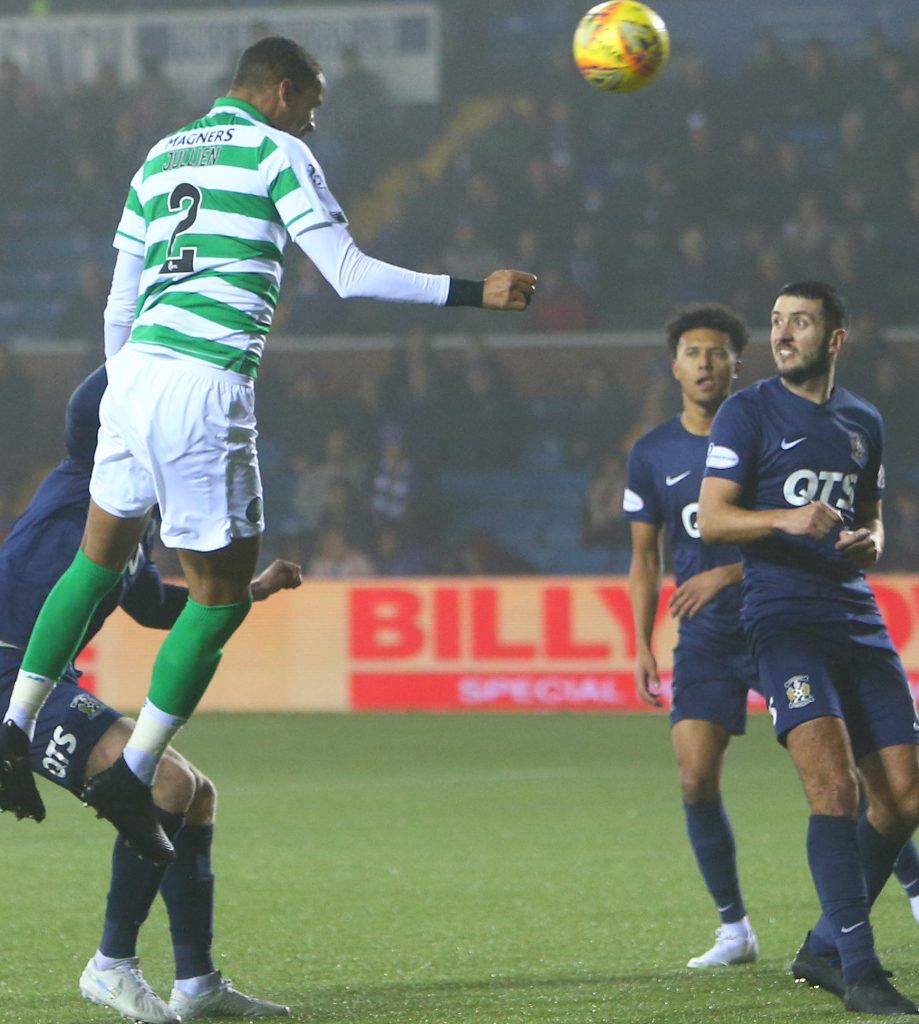 RISE AND SHINE…Christopher Jullien leaps high to bullet in a header against Kilmarnock at Rugby Park in January 2020.

Long-term injury victim Christopher Jullien, who has not played this year, is back training and Josip Juranovic and Greg Taylor also aim to be back in contention soon as they battle back from their hamstring and shoulder problems respectively.

Asked if Starfelt and Carter-Vickers are the long-term central option, Postecoglou, speaking to the Daily Record, added: “They are two good players, but we also have Stevie who was very good when he played earlier in the season and is ready to come into the team at any time. We rate him highly.

“We have got young Dane Murray who did well, we have Chris who is coming back. So, it’s not about locking down a couple of people.

“We want to create a strong squad and be competitive all over the park. But with centre-back partnerships the more settled you are, the more understanding they have, it helps.

“It’s good those two have got a run of games together.”

Starfelt and Carter-Vickers will add to their game time together when Celtic host St Johnstone in the Premiership tomorrow afternoon.