SCOTT BROWN insists he has no hard feelings over Brendan Rodgers’ shock exit after turning in a Man of the Match performance in Celtic’s last-gasp 2-1 triumph over Hearts last night.

The inspirational skipper was excellent throughout a frantic, stamina-sapping, hectic tussle at Tynecastle, but still had the composure to set up the winning goal for Odsonne Edouard two minutes into stoppage time with an exquisite ball into the penalty area.

Brown also backed interim gaffer Neil Lennon to take up the challenge and guide the Hoops through the soccer minefield that leads to the historic treble treble and the club’s eighth successive Premiership crown.

Edouard’s deft touch was enough to maintain the champions’ eight-point advantage over Rangers who beat Dundee 4-0 at Ibrox.

Hoops fans are raging at Rodgers’ swift departure for Leicester City at such a crucial stage of the campaign, but the 33-year-old captain is adamant he will not bear a grudge.

Brown, speaking to the Daily Record, said: “It is always going to be a shock when a manager leaves a club. But we need to just continue what we are doing. 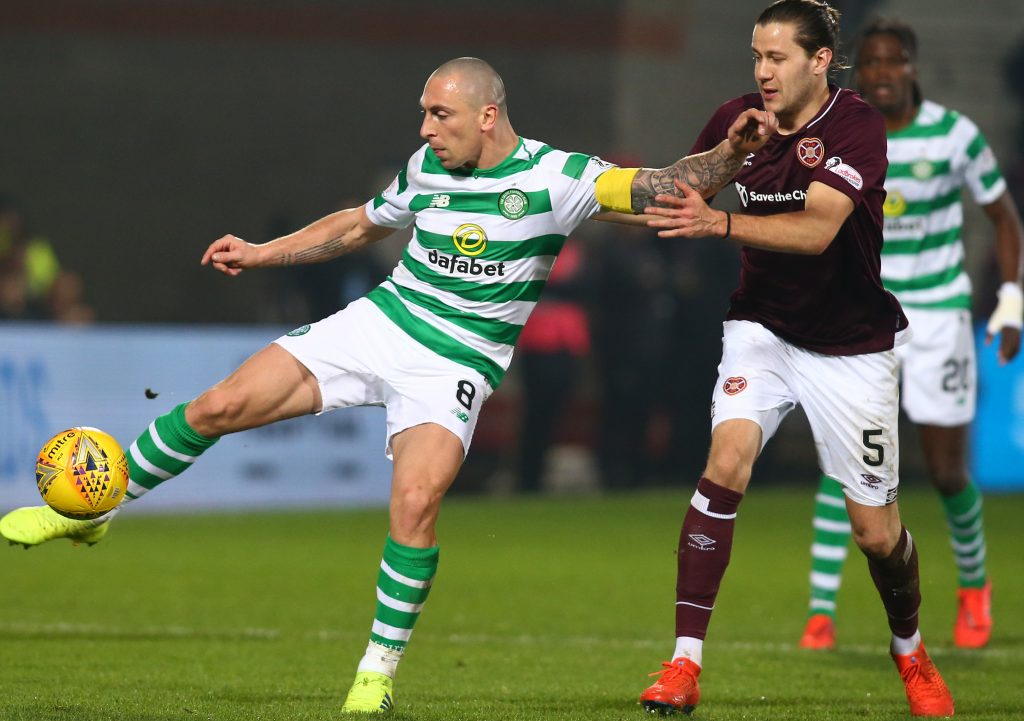 MIDFIELD MASTER…Scott Brown in a tussle with Hearts’ Peter Haring.

“He has left us in a great situation. We have won seven trophies out of seven since he came in and now we need to make sure that we need to keep going on for him as well.

“There is always going to be a lot of stick, but, for me, he was brilliant on a personal level and that is what really counts.

“It is just sad to see him go, but, as I say, the fans were unbelievable, singing for 90 minutes whether is Lenny or whether it was Brendan, they are always following us.

“It is never going to be a great time to have a manager leaving, but he has left us in a great place. We are eight points clear in the league and we have 10 games left.

“For me, he was unbelievable. He realised that I still had a couple of years left in my legs and he put a lot of faith in me and a lot of trust.