JEREMY TOLJAN has taken a whopping wage CUT to join Celtic on loan from Borussia Dortmund for the remainder of the season.

And Hoops boss Brendan Rodgers is delighted the 24-year-old right-back is concentrating on game-time rather than his bank account in the forthcoming crucial four months.

Toljan, a former Germany Under-21 cap, had other more lucrative offers, but decided Parkhead was the place to be as he accepted the challenge to join the champions in their quest for a historic treble treble and an EIGHTH successive title.

The talented defender, who can also play on the left flank, was a £4.5million signing for Dortmund from Hoffenheim last season and played 27 times, manager Peter Bosz sacked halfway through a disappointing campaign.

Peter Stoger took over and guided them to fourth place before stepping down and his successor Lucien Favre has overlooked Toljan for a starting place.

Rodgers said: “He is a player who has sacrificed his own wages and money to want to come here to play which shows a sign he is hungry to get his career back on track again. 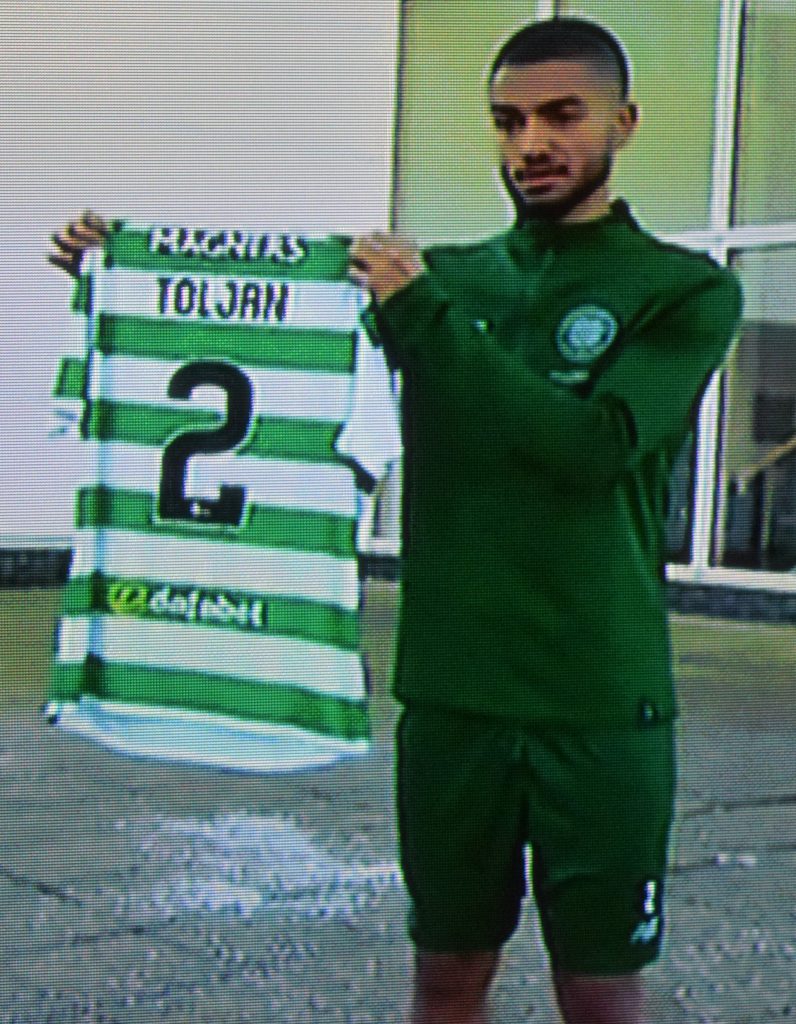 YOUR NUMBER’S UP…new Bhoy Jeremy Toljan with his Celtic shirt at Lennoxtown yesterday.

“It is a great attitude to start with and I look forward to working with him. He is very quick, he is dynamic and he also gives us flexibility because he can play on both sides. He brings that athleticism I like players in my team to have.

“In the modern game, at the higher levels, you have to be able to defend the central areas, the middle, but also be able to get out and he has the pace to do that and get tight to people. He has a good profile – six foot, fast and dynamic. He gives us another dimension.”

The Hoops gaffer added: “He went to Dortmund as a young player after going through the German system. Sometimes that happens when there are a couple of changes of manager and you don’t play as often as you want.

“We had tracked him a while back, but we couldn’t get him. There was no hunger from them to want to do anything.

“He is a player the recruitment team were aware of for some time, but we felt it was outside of our reach and there was no desire from them to let him out in the summer.

“He is one we have known about, but probably didn’t think we could get and thankfully the club has been able to do an agreement and the boy has made a sacrifice, as well.”

Toljen will be assessed before tomorrow’s Premiership encounter against St Johnstone at McDiarmid Park, but it is more likely he will make his debut against Hibs at Parkhead in midweek.