JUBILANT Brendan Rodgers hailed his Hoops heroes after their last-gasp 1-0 triumph over Kilmarnock at Rugby Park this evening.
Celtic moved eight points clear at the top of the Premiership following skipper Scott Brown’s 90th-minute deflected winner.
The skipper, who had been booked in the first-half for a challenge on Greg Taylor, saw red when he went to celebrate with the fans behind the goal.

Referee Bobby Madden greeted Brown with a second yellow and the midfielder went from ecstasy to agony in the space of a couple of minutes.

Rodgers said: “It was a great win for us. I thought we played well. It’s never an easy place to come.

“You’re never going to create a load of chances here with the speed of the surface and also because Kilmarnock are super organised and make it tough for you. It’s as good as we’ve played in my time coming here.

“We had to deal with a lot of balls in behind because they had good pace with the boys up front. They stick it in behind early and you have to deal with that and the bounce of the surface.

“It was another clean sheet and defensively we were solid. With the ball, I thought we had good control.

“This win adds onto our points total. Everyone talks about rivals slipping up and drawing, but you still have to exploit that.

“To come here is a very difficult place to do that, especially off the back of a tough midweek game. It keeps our domestic form going to a really high level. I thought we played well and had good control.” 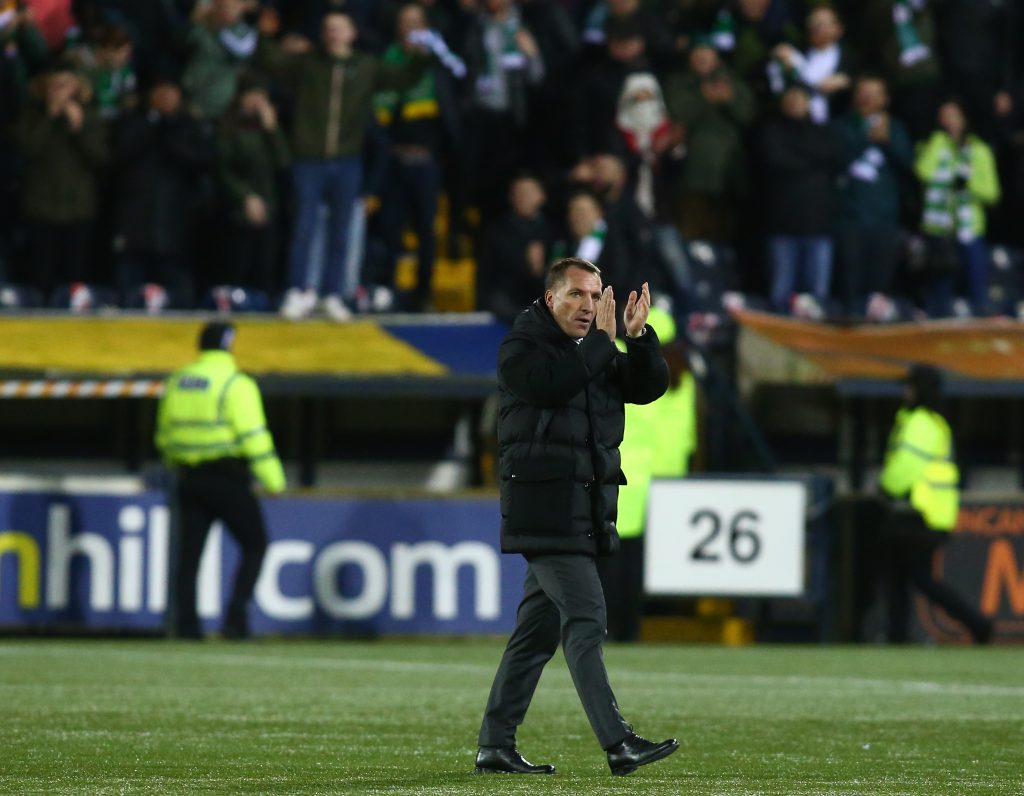 FAN-TASTIC…Brendan Rodgers applauds the Celtic supporters after the Hoops’ 1-0 win at Rugby Park.

Rodgers also emphasised his players’ mentality and insisted the focus was sharply on the next game and not the eighth successive Premiership title.

The Irishman added: “I thought our concentration was very good considering what went into Thursday night.

“You have to recover and these games are very taxing mentally because you have to stay concentrated and focused.

“Kilmarnock have had a full week to prepare and I thought we dealt with that side of it really well. We controlled the game up into their half.

“The back four were excellent. The two centre-halves were very good and we had good movement in midfield. We had some good combinations.

“There’s still a lot of games to go, but I think on the back of our midweek game, which was a really tough game with exertions physically and mentally, this is as hard a place you can come to with the surface and everything else.

“To come through that with a clean sheet and get the three points was very pleasing.

“We have to focus. That’s the key message, that mantra of the next game.

“Our next league game is Motherwell at home. We know that’ll be tough because they’re playing very well.”

The game panned out as expected – tough, physical and lots of tackles from every angle.