BRENDAN RODGERS insists there is no way he will dismiss the unlikely challenge of Kilmarnock for Celtic’s Premiership crown.

The champions have their eyes on an eighth successive title and they go into this afternoon’s game against Steve Clarke’s Rugby Park outfit a point adrift of the Ayrshire side.

Rodgers and the Hoops, with two games in hand, can go back to the pinnacle with a win in front of their fans in Paradise, but he realises Killie will be using Leicester City’s astonishing feat of winning the Premier League in 2016 as their inspiration.

He said: “Leicester showed at 5,000-1 that it can be done. Were Killie the same odds? What Leicester did was make the impossible possible.

“Well, why not? That’s what they will think themselves if they can continue with that kind of consistency.

“When there are 10 games to go, you look closer at it because then there’s a different pressure and everything else that comes into play which is totally different and new if you’ve not been in that situation before.

“But you can’t argue with what Kilmarnock have done over a sustained period, which has been absolutely brilliant. What they have is experienced players and a mix of young players, too. They have worked very well.

“Steve has galvanised the club. The biggest credit you can give him and his team is it’s not a surprise.

“If you’ve watched them over the last year they’ve been consistently very good at getting results. 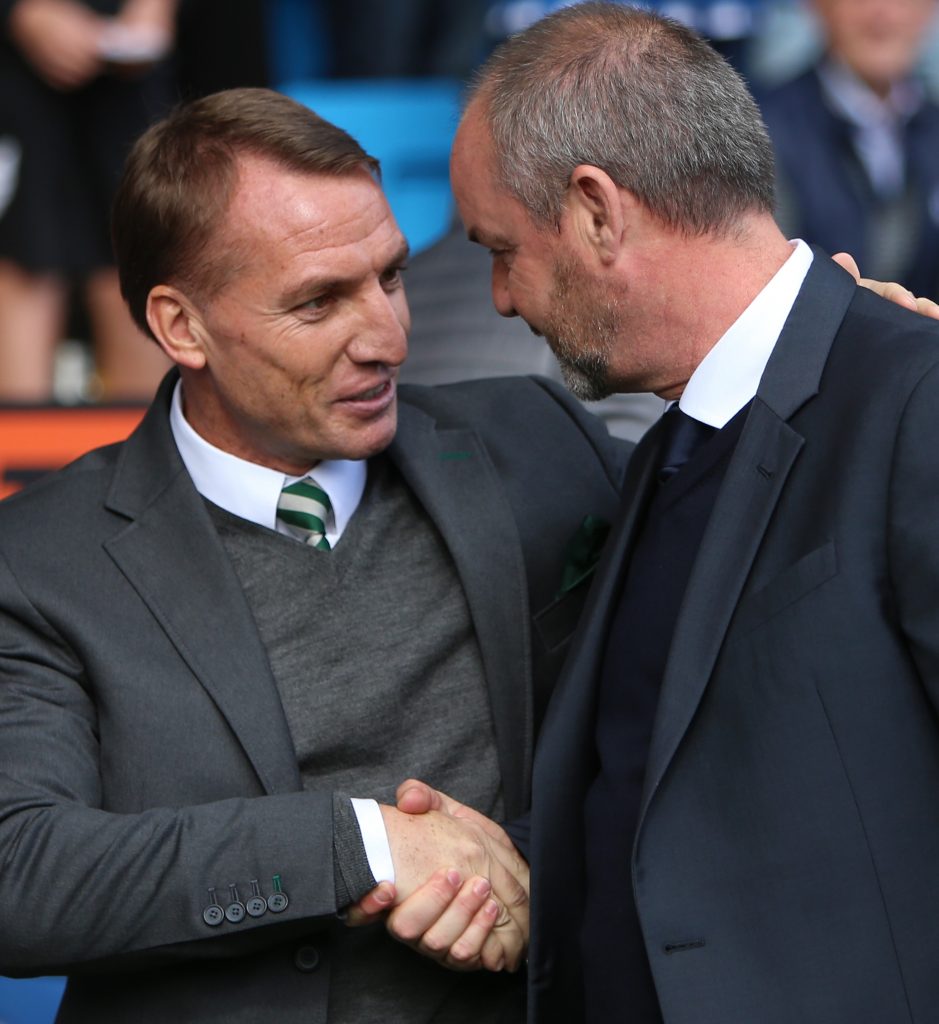 SHAKE ON IT…Brendan Rodgers and Killie boss Steve Clarke before the match at Rugby Park in September. Pic: Geo.

“They’re a very difficult team to play against. They defend very deep. They are tight and well-organised and compact. You need to be very patient when you are playing against them and you need to be able to move the ball quickly.”

Looking at his opposite number Clarke, Rodgers added: “Steve and I are what you would call coaching managers. We like to be on the grass, or the astro, with the players and feel them close and help them develop. That’s our natural habitat.

“Steve is getting the best out of experienced guys like Gary Dicker and Chris Burke, who have been around the block and understand the game.

“And he’s getting the best out of Stephen O’Donnell and Greg Taylor. He’s nurtured and developed them and shown his coaching qualities. It’s not an accident how consistent they are.”

Celtic were sloppy when they met Killie on the awful and difficult playing surface at Rugby Park earlier in the campaign when they took a first-half lead through a flying header from Leigh Griffiths.

However, the Hoops just could not find their natural rhythm after the turnaround and allowed their opponents back into the game when a speculative long-range drive from Burke bounced awkwardly in front of Craig Gordon before nestling in the corner of the net.

And, deep in stoppage time, Clarke’s side were awarded a corner-kick from which former Celtic prospect Stuart Findlay flashed in the winner.

The champions are unlikely to be caught out this time around – Christmas came early for Killie in September.